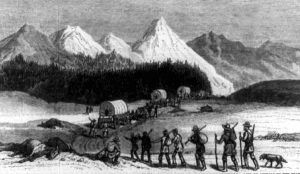 Emigrants arrive in what will soon be Denver, Colorado

William Green Russell, a miner from Georgia, when returning from California where he had been prospecting, heard from some Cherokee Indians, of gold in the Pike’s Peak region. In the spring of 1858 he organized a party of white men and Cherokee Indians to go to Pike’s Peak to search for gold. When the caravan moved away it consisted of 60 people, 30 yoke of cattle, 14 wagons, one two-horse team and a dozen ponies. They came out by the Smoky Hill Trail and camped on June 24, 1958 under the cottonwood trees on the west side of Cherry Creek, at a point where it empties into the South Platte River. This was the first organized party that came to the Pike’s Peak region in search for hidden treasure.

Closely following them was another party from Lawrence, Kansas, under the command of John Easter. They put in at the base of Pike’s Peak and camped in the “Garden of the Gods.” Three men of this party – Frank M. Cobb, John D. Miller and Gus Voorhees — climbed to the top of the peak.

After they returned, other members of the party, including Mrs. Anna Archibald Holmes, also went to the top of the peak, which gives Mrs. Holmes the distinction of being the first woman to accomplish that arduous task, and, according to the chronicler, she bore the fatigue of climbing with as much fortitude as the men. She was afterwards, the first school teacher in Pueblo. In the meantime, the Russell party prospected up the east side of the South Platte River with such scant success that the Cherokee began to show signs of waning enthusiasm. They lacked industry, patience and hope, which are so essential to the prospector, and, in less than ten days, were completely disillusioned of the charm of gold seeking. They argued that there would be trouble with the Indians, and the discontented white men added the argument that they had not found pay dirt and that they had all come out on a fool’s errand. 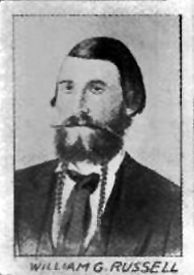 William G. Russell, one of the first founders of Denver, Colorado

William G. Russell entreated them not to break up the party, but, they refused to listen, and started on their long homeward journey. Nothing daunted by the desertion of the larger number of the party, Russell and his remaining associates — 13 in all — continued prospecting, and, finding gold where the Dry Creek empties into the South Platte River near present-day Enqlewood, they stopped there. and gave it the name of “Placer Camp.”

The Lawrence party pulled into Placer Camp on the fourth of September, 1858. They were more inspired by the spirit of real estate speculation than digging for gold, and, thinking that Placer Camp diggings would help to build up a town, they organized a town company and went to work in earnest. By the middle of September, a number of cabins were built fronting on the streets in a dignified town-like manner. To this settlement, a mile north of Placer Camp, they gave the name of Montana City. In the vocabulary of the West, a collection of houses was always a city.

A fall of snow about the last of September set Dr. Levi J. Russell and his brother, Willliam, thinking of winter quarters, and they decided that the mouth of Cherry Creek would be a better place to winter than at Placer Camp or Montana City.

While their plans were being formed, an old trader named John Simpson Smith, arrived at the camp. He proposed to unite with the Russell brothers and build a double cabin. William Russell sanctioned the arrangement because Smith was married to an Indian woman and on friendly terms with the natives, which might be of advantage should the Indians resent the location of a town on their land. They lost no time in building the double cabin which, being near an Indian tepee, was called “Indian Row.” This formed the nucleus for the camp which was the actual beginning of Denver.

M. Rooker was the first man with a family to join the settlement. His house was a continuation of “Indian Row.” William McGaa came in with a number of Indians trooping after him and built a shack. A Frenchman named Henry Murat drifted in with his wife. Murat was a queer genius and became commonly known as “Count,” because he claimed to be related to Bonaparte, King of Naples. He shaved men’s beards and his wife toiled at the washtub. Individuals and small groups drifted in from various directions. The fanciful stories told around the evening camp fires of what the Russell boys had done at “Placer Camp” had a wonderful power in exciting the hopes and ambitions of the more recently arrived people.

About the first of October, a town company was organized, arrangements for surveys formed, and the christening of the settlement was left to William  Russell, who selected the name of Auraria, after his home town in Georgia. A few days later, William Green Russell and his brother, J. Oliver Russell, started to their old home for the purpose of organizing a large company of gold seekers. They were convinced that rich deposits of gold existed somewhere in the Pike’s Peak region and they were determined to find it. 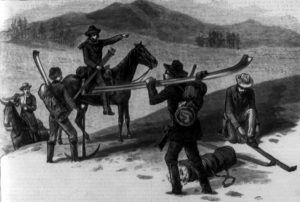 Pioneers in what would soon be Denver, Colorado

Cherry Creek, now risen to the dignity of a settlement, became the focus for gold seekers, and Pike’s Peak continued to be the popular landmark for the whole region. Up until this time there had been neither glass nor nails in the country and many expedients were resorted to in order to give the rude habitations light, entrance and exit. However, the pioneer merchants were not far behind the gold seekers. On October 27th, Blake and Williams arrived with a large stock of mining merchandise. A week later, Kinna and Nye came in with a stock of hardware, and other merchants soon followed.

A party under the command of D. C. Oakes reached the camp on October 10th. Oakes was an energetic and forceful man. He saw the possibilities of a town near the mouth of Cherry Creek, and returned East late that fall to remain through the winter. When he reached his home in Iowa, he published a pamphlet on Pike’s Peak. It was widely sold and had a potent influence in causing a great emigration to the Pike’s Peak region.

E. P. Stout, with a small party, arrived in Auraria about the last of October. Mr. Stout became so prominent in founding Denver that a street was named for him. He gave the following experience:

“We were met by Jack Jones and John Smith, traders with the Cheyenne and Arapaho Indians, who were living in Auraria. That evening these two traders invited us to visit them and feast with them. We did so and were treated to a good meal provided by Jones’ Indian wife. It wound up with a hot whiskey stew, made from whiskey distilled from wheat and called ‘Taos Lightning.’ From the effect it produced on Jones and Smith, one would readily have concluded that it was a genuine article of fighting whiskey. When it began to take effect those two gentlemen seemed to be seized with a fiendish desire to slaughter somebody, and, with their Colt revolvers, commenced a rapid fusillade upon each other. As that kind of entertainment was rather too vigorous for us tenderfeet, we managed to slide out through the darkness, making our way to our own tents, leaving our hosts to the tender mercies of each other and expecting to find in the next morning, both of them riddled with bullets. On the contrary, before the sun was fairly up, both of these gentlemen came over to our tents to apologize in the most humble and contrite manner for the disgraceful and humiliating spectacle they had made of themselves before their invited guests. We came to the conclusion that it had been merely an effort on their part to impress us with their wonderful bravery.”