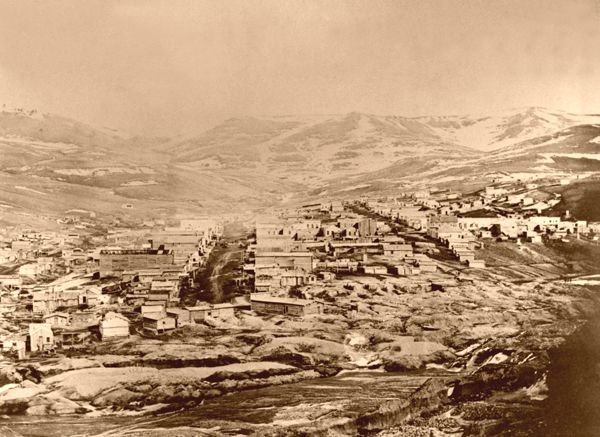 By definition, Virginia City, Montana is a ghost town, yet it is very much alive. Frozen in time, this historic city provides one of the best-preserved examples of the many mining camps of the American West.

Perched high in the Rocky Mountains in a bowl along Alder Gulch, Virginia City got its start when gold was discovered in Alder Gulch in 1863. Planning on keeping their discovery a secret, the men traveled to Bannack, some 60 miles to the southwest, for supplies. However, several sharp-eyed prospectors noticed their gold-filled sacks and when the men returned to Alder Gulch, some 200 miners were following them. News spread quickly and before long the area was flooded with prospectors living in makeshift shacks, tents, caves, or simply sleeping beneath the trees.

In the meantime, the nation was in the midst of the Civil War and though the gold brought emigrants from all over the world, overwhelmingly the influx of miners were “rebels” from the South. Just weeks later, on June 16th, a town company began to plat the settlement. The intended on naming the town “Verona,” a misspelling of “Varina,” the wife of Jefferson Davis, President of the Confederate States of America. However, the newly elected miners’ court judge, Dr. G. G. Bissell, was an equally stubborn Unionist who submitted the name Virginia instead.

The majority of avowed secessionists living in the camp, which was then part of Idaho Territory and therefore “belonging” to the Union, made it primarily a “southern” town, with its residents’ sympathies lying with the Confederates. Furthermore, the camp was producing enough gold to win the Civil War for whoever could capture it. Due to this strategic position, President Lincoln soon sent northern emigrants into the mining camp to help hold the gold for the North. This of course caused all kinds of tension in the new city, which quickly became one of the most lawless places in the American West. 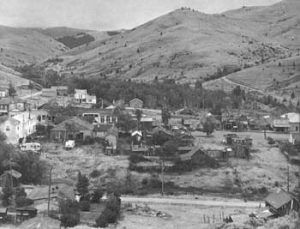 Within a year, some 10,000 people were living in a number of mining camps lining the gulch and in 1864 Congress created the new territory of Montana, separating it from Idaho Territory. Bannack, the site of the first gold strike in the area, became the territory’s first capitol. However, just a year later, Virginia City had gained so much influence that the capitol was moved. Rapidly becoming the territory’s social center and transportation hub, the shanties and tents were replaced by permanent buildings and Virginia City became home to Montana’s first public school, newspaper, and telegraph.

Virginia City and nearby Nevada City became known as the site of the richest placer gold strike in the Rocky Mountains. In the first three years alone, an estimated $30 million worth of gold was removed from the gulch.

Though a few of the miners made their fortunes in the goldfields, and even more businessmen became wealthy, there was yet another group who planned on gaining riches another way. These were the many road agents operating in the area Though historians dispute this today, the robbers and thieves were said to have been led by none other than the Sheriff, himself – Henry Plummer.

Time after time, miners, freight haulers, and stagecoaches lost anything of value to the bandits lurking about the trails to and from Virginia City. As a result, a secret society of vigilantes was formed to stop the outlaws. Lynchings became the common event of the day as the vigilantes hunted down the road agents, one by one, and stringing them up in the streets of Virginia City and Bannack. Though history now questions whether the many crimes were committed by highwaymen or perhaps the vigilantes, themselves, there is no question that the settlement was extreme in its lawlessness and violence.

No sooner than Virginia City had begun to boom when the city began its gradual decline. When gold was discovered in Last Chance Gulch in what is today Helena, the fickle miners began to move. Though gold continued to be found in the area, by the early 1870’s Virginia City’s population had been reduced to only a few hundred. In 1875, the territorial capitol was moved to Helena and Virginia City was on her way to becoming a ghost town.

Though lode mining continued for years, it was never as profitable as the placer mining. From 1898 through 1922, floating dredges destroyed several of the small mining camps along Alder Gulch, leaving in its wake, mounds of tailings and dredge ponds. The original settlement of nearby Nevada City was totally eradicated by the dredging operations. However, Virginia City was spared because it had not been established upon gold-bearing gravel. During the decades of dredge mining, the area produced approximately $7 million in gold.

As the amount of gold played out, so did the dredging operations. However, when the price of gold rose significantly in the 1930s, dredge mining was revived once again, only to be ceased in the next decade with the advent of World War II.

Today, a few small mining operations continue in the Virginia City area; but primarily, any remaining gold is searched for by hobbyists. 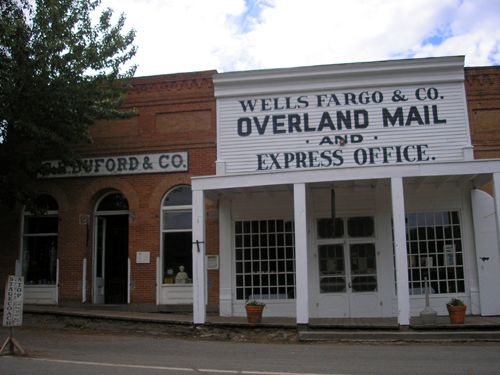 Virginia City is now one of the most preserved ” ghost towns ” in the American West, thanks to the efforts of Charles and Sue Bovey. Mr. Bovey, a Montana rancher, and state legislator, along with his wife, Sue, first visited Virginia City in 1944. Though suffering from neglect and weather, the town still stood largely intact thanks to the absence of major fires and later development.

Captivated by the historic city, the Boveys began to raise money for preservation, collected artifacts, bought buildings that they preserved, and reconstructed others that had been destroyed. Nevada City, which had been almost totally obliterated by dredge mining, was entirely rebuilt. Today, Nevada City stands as an outdoor historical museum, with numerous historic buildings, artifacts, and furnishings.

Another project taken on by the Boveys was a tourist court called “Daylight Village.” Lodging was badly needed in the up-and-coming revived ghost town at the time, and the lodging facility was established in 1946 on the eastern edge of Virginia City to meet the demand. 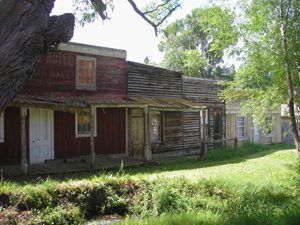 The “village” was comprised of false-fronted motel units, that were fronted by weather-beaten lumber. The painted signs represented businesses advertised in the 19th-century editions of the Montana Post. The motel units were hidden behind the false fronts. Like other Virginia City buildings, Daylight Village transported visitors back to the past. The village, which included some 40 buildings, no longer operates. Falling into disrepair, the buildings have not been maintained, as they are not considered “historic” and there are no funds for renovation. Still, they are an interesting view and make for great photo opportunities.

By 1978, the Boveys owned one-third of the town; but, in the same year Charlie Bovey passed away. His wife, Sue, died in 1988. Just one year later, many of the Bovey-owned properties were placed up for sale.

In addition to the more than 200 historic buildings that are preserved for tourists, Virginia City offers a number events for visitors that include the Heritage Days & Victorian Ball in August, the Virginia City Players’ variety productions at the Opera House, a narrow-gauge railroad, and the Brewery Follies at Montana’s first brewery. Also provided for some 70,000 visitors who come to Virginia City each year, are museums, shops, restaurants, and accommodations.

Virginia City was designated a National Historic Landmark in 1961 and listed on the National Register of Historic Places in 1976. Today, Virginia City boasts a population of some 150 year-round residents and about 300 summer residents. It is located about 65 miles southwest of Bozeman, Montana. 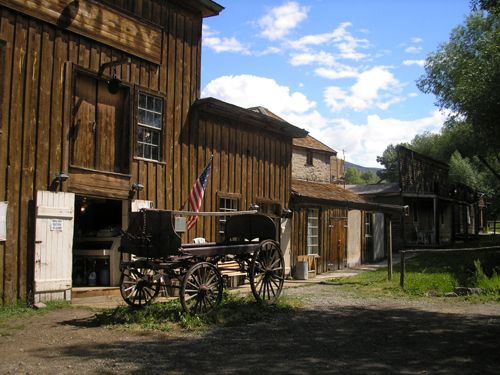 Bannack – From Gold to Ghosts