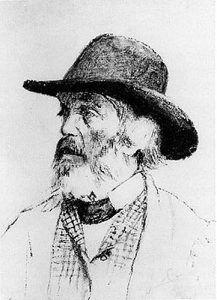 Thomas Farrar – (1615-1694) – Of Lynn, Massachusetts, the elderly Mr. Farr was accused of witchcraft and spent five months in prison before he was released. He was born to Thomas and Athellred Thomas Farrar in Lancaster, England in about 1615. He married Elizabeth Thomas in about 1635 and the couple would have seven children. They immigrated to the United States in 1640 first settling in Boston, Massachusetts. Sometime later they moved to Lynn, where Thomas worked as a farmer. In January 1680, his first wife died and, he is alleged by some to have married Abigail Collins just a few months later, however genealogical records show Collins married his son Thomas instead. Familiarly called “Old Pharoah,” Thomas was allowed to sit in the pulpit at church, probably because he was hard of hearing. He was accused of witchcraft by Ann Putnam, Jr., who said that he was pinching her in her dreams. Despite that fact that his son, Thomas Farrar, Jr., was a selectman in Lynn, the elder Thomas was brought before the court in Salem on May 18, 1692. Ann Putnam, Jr. would testify that Farrar “appeared before me in the apparition of an old gray-headed man with a great nose, which tortured me and almost choked me and urged me to write in his book.” Farnum was then imprisoned and kept there until November 2, 1692. He died on February 23, 1694, in Lynn.

Edward Farrington (1662-1745?) – Edward was born in Lynn, Massachusetts to John and Elizabeth Knight Farrington on July 5, 1662. He was living in Andover when he was accused of witchcraft for afflicting Mary Warren. Witnesses against him included Martha Sprague and Ann Putnam, Jr. He spent some time in prison; but, any further information is unknown. He died in Andover on January 3, 1745/46.

Abigail Dane Faulkner, Sr. (1652-1730) – Accused of witchcraft, along with several other members of her family, Abigail was found guilty; but, her execution was delayed due to pregnancy. Abigail was born on October 13, 1652, in Andover, Massachusetts, to the Reverend Frances Dane and Elizabeth Ingalls Dane. On October 12, 1675, Abigail married Lieutenant Francis Faulkner and the couple would have at least seven children. Both the Dane and Faulkner families were early settlers of Andover who gained social prominence and were wealthy compared to most of their neighbors. In 1675, Francis Faulkner’s father gave him the bulk of his estate. At just 24 years-old that made young Francis an influential figure in Andover and an object of envy. When his father died 12 years later, Francis inherited the remainder of his father’s estate.

Not long after his father’s death, Francis Faulkner became ill, suffering from convulsions, confusion and memory loss, and he was unable to manage his affairs. His wife Abigail was granted control of her husband’s estate until their sons came of age. This put her in a position of power that exceeded most of the men in Andover. The envy of her neighbors as well as the contention in the community concerning her minister father, Reverend Frances Dane, made Abigail and her family targets for accusers.

The first of her family members to be accused was her niece, Elizabeth Johnson, Jr., in August. The 22-year-old Elizabeth quickly confessed, telling her examiners on August 10th, that she had consorted with the devil, meeting him at a gathering of “about six score”. The very next day, on August 11th, Abigail was arrested, having been accused by neighbors who claimed she had “afflicted” their children. She was taken to Salem Towne and interrogated the same day by Jonathan Corwin, John Hathorne, and Captain John Higginson. Most of her accusers were the “afflicted girls” of Salem Village including Ann Putnam, Jr. and Mary Warren. However, the middle-aged William Barker, Sr., also accused her, stating that the Reverend George Burroughs was the “ringleader” of the witches and that Abigail Faulkner and her sister, Elizabeth Johnson, Sr., were his “enticers to this great abomination.”

In the frenzy that followed, Abigail’s sister, Elizabeth Dane Johnson, her sister-in-law Deliverance Hazeltine Dane, two of her daughters, Abigail Faulkner, Jr. and Dorothy Faulkner, two of her nieces, and a nephew would all be accused of witchcraft and arrested. Abigail was convicted of witchcraft and sentenced to death. However, her execution was delayed because she was pregnant. In December 1692, four months after her arrest, Faulkner petitioned Governor Phips pleading for clemency, explaining that her husband was an invalid and her children had no caretaker. Governor Phips granted her request and Abigail was released from prison. Abigail Faulkner died in Andover, Massachusetts on February 5, 1730. Her husband died two years later.

Abigail Faulkner, Jr. (1683-17??) – The daughter of Lieutenant Francis Faulkner and Abigail Dane Faulkner, Abigail, Jr. was born on August 12, 1683, in Andover, Massachusetts. Nine-year-old Abigail, Jr., as well as her 12-year-old sister, Dorothy, were arrested shortly after their mother for allegedly practicing witchcraft. When they were examined, they confessed under pressure and said it was their mother who had made them witches. With the help of her grandfather, the Reverend Frances Dane, she and her sister, along with their cousins, Stephen and Abigail Johnson, were released from prison on bond. Her mother, Abigail Faulkner, Sr. would be convicted of witchcraft and sentenced to death. However, her execution was delayed because she was pregnant. She was later pardoned by Governor Phips and released. Abigail, Jr. would grow up to marry Thomas Lamson on April 6, 1708.

Dorothy Faulkner (1680-17??) – The daughter of Lieutenant Francis Faulkner and Abigail Dane Faulkner, Dorothy was born on February 15, 1680, in Andover, Massachusetts. Twelve-year-old Dorothy, as well as her nine-year-old sister, Abigail, Jr., were arrested shortly after their mother for allegedly practicing witchcraft. When they were examined, they confessed under pressure and said it was their mother who had made them witches. With the help of her grandfather, the Reverend Frances Dane, she and her sister, along with their cousins, Stephen and Abigail Johnson, were released from prison on bond. Her mother, Abigail Faulkner, Sr. would be convicted of witchcraft and sentenced to death. However, her execution was delayed because she was pregnant. She was later pardoned by Governor Phips and released. Dorothy would grow up to marry Thomas Lamson on Samuel Nurse on November 25, 1708.

Captain John Floyd (1636?-1701) – Like Captain John Alden, Jr., John Floyd had been involved in the Indian Wars in Maine, causing him become a target of some of the accusers in Salem Village. John Floyd married Sarah Doolittle in about 1661 in Lynn, Massachusetts and the couple would have eight children. They were living in Lynn in 1662 at the time their first child was born. In about 1670 the family moved to Malden where he owned a farm. In 1676 he served as a lieutenant in Captain Henchman’s company in King Philip’s War. In about 1680, he moved his family again, this time to Rumney Marsh, but, retained his land in Malden. Rumney Marsh, the northernmost district of Boston, would later become part of Chelsea and today is called Revere.