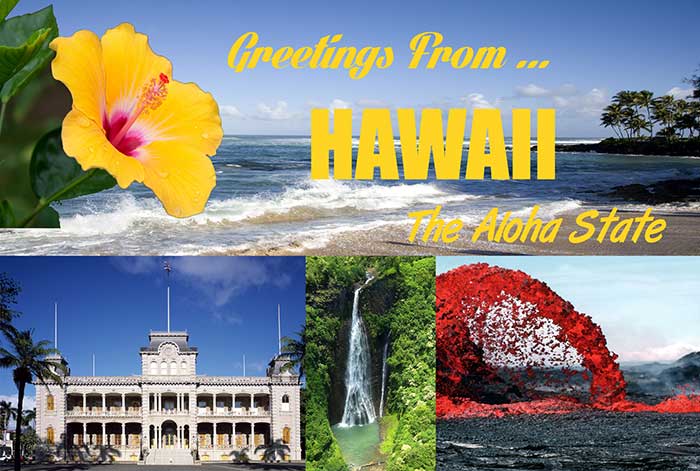 Greetings From the Aloha State

Hawaii is the 50th & most recent U.S. state to join the nation, on August 21, 1959. Hawaii is the only U.S. state composed entirely of islands. Its diverse natural scenery, warm tropical climate, an abundance of public beaches, oceanic surroundings, & volcanoes make it a popular destination for tourists, surfers, biologists, and volcanologists.

Hawaii’s eight main islands are Niʻihau, Kauaʻi, Oʻahu, Molokaʻi, Lānaʻi, Kahoʻolawe, Maui, and Hawaiʻi, often referred to as the Big Island or Hawaii Island. The uninhabited islands in the northwest make up most of the Papahānaumokuākea Marine National Monument, the largest protected area in the U.S. and the third-largest in the world.

Nicknames include the Aloha State, Paradise of the Pacific, and the Islands of Aloha.

Once an independent nation, Hawaii includes most of the 137 volcanic islands of the Hawaiian archipelago spanning 1,500 miles.  It was settled by Polynesians between 124 and 1120 A.D. 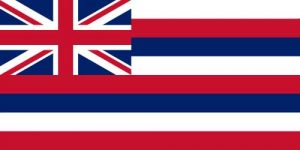 The flag of Hawaii is the only US state flag to include a foreign country’s national flag, that of the United Kingdom, marking the historical relations with the British Empire. Adopted in 1845 and last changed in 1898, the flag has eight alternating horizontal stripes of white, red, and blue, with the United Kingdom’s Union Flag in the upper left corner. 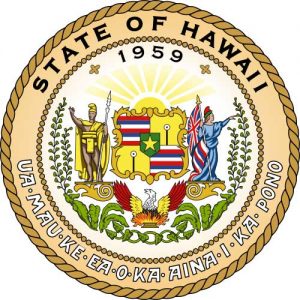 The Great Seal of Hawaii is only slightly modified from the Territorial Seal. Designated in 1959, modifications included adding the words “State of Hawaii” at the top and “1959” in the circle. The state motto “Ua Mau ke Ea o ka ʻĀina i ka Pono” loosely translates to “The life of the land is perpetuated in righteousness.” The rising sun replaced the royal crown from the original coat of arms. This represents the birth of a new state. King Kamehameha the Great and the Goddess of Liberty holding the Hawaiian flag replace the two warriors on the royal coat of arms. The eight stripes in two of the quarters of the shield represent the eight main islands. The star in the middle of the shield signifies the fiftieth star added to the United States flag. The phoenix, a symbol of death and resurrection, symbolizes the change from an absolute monarchy to a free, democratic form of government.