The City of Leavenworth was founded in 1854 largely to support Fort Leavenworth, but quickly became the springboard to the west.  The settlement was the first official town in Kansas.

Long before Kansas was acquired by the United States in the Louisiana Purchase in 1803, it belonged to eight Indian tribes, including the Kanza, Osage, Wichita and the Pawnee. During the 18th century, the French and Spanish competed for the area, but the French succeeded due to better relations with the Native Americans. Founding Fort Cavagnial in 1744 in the approximate vicinity of where Fort Leavenworth stands today, the French evacuated 20 years later when France ceded the Louisiana territories west of the Mississippi River to Spain. Then the territory reverted back to France before it was acquired by the United States.

Lewis and Clark explored the area in their famous expedition between 1803 and 1806 and the area became known as the “Great American Desert.” Considered unsuitable for settlement because of its barrenness, the region was designated as a permanent home for the Native Americans. From 1825 to 1840, nearly 30 tribes gave up land in the northern and eastern part of the nation, moving to the Kansas territory. Some of these tribes included the Shawnee, Delaware Chippewa, Iowa, Wyandot, and Kickapoo.

Meanwhile, in 1827, white men officially came to the area when Colonel Henry Leavenworth and the third Infantry Regiment from St. Louis, Missouri established Fort Leavenworth. The post was the first settlement in Kansas territory and is the oldest active Army post west of the Mississippi River. Sitting on the bluffs overlooking the western bank of the Missouri River, the fort initially served as a quartermaster depot, arsenal, and troop post, and was dedicated to protecting the fur trade and safeguarding commerce on the Santa Fe Trail.

Fort Leavenworth quickly became a primary destination for thousands of soldiers, surveyors, and settlers who were passing through on their way to the vast West. During these early years, soldiers from the fort protected wagon trains hauling supplies over the Santa Fe, Oregon and other trails to other forts and military camps of the West, some as far as west as the Pacific Ocean. In 1839, Colonel S. W. Kearney marched against the Cherokee with ten companies of dragoons from the fort, the largest U.S. mounted force ever assembled.

In the 1840s, Kansas lay in the path of the settlers rushing to Oregon and California. Though thousands of wagons passed through; other pioneers, seeing the agricultural promise of Kansas, settled in the area instead. 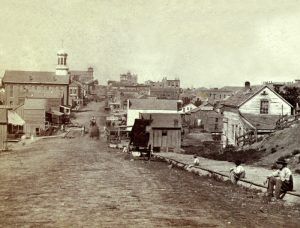 The City of Leavenworth was founded in 1854 largely to support Fort Leavenworth but quickly became the springboard to the west. The settlement was the first official incorporated town in Kansas. With the rush of white settlers, many treaties with the Indians were made and broken, and the Indians along the westward trails began to retaliate with uprisings and raids that continued until 1878. Though the city of Leavenworth and the fort were never attacked by Indians, it was the military men of Fort Leavenworth that first attempted to protect the pioneers on these early trails. Later, dozens of forts would be erected west of Fort Leavenworth.

The city of Leavenworth had its origin at a meeting in Weston, Missouri, just a few days after the passage of the Kansas-Nebraska bill. On June 12, 1854, the townsite was marked off by George W. Gist, John C. Gist and Samuel Farnandis on the Delaware Trust Lands immediately south of the Fort Leavenworth military reservation. Already there, were a number of squatters who agreed to relinquish their rights to the town association. The townsite, situated on 320 acres, was platted into lots and divided into 175 shares, which were given over to the 32 members of the town association. The first sale of town lots was held on October 9, 1854. 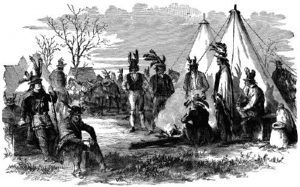 Obviously, the Delaware Indians were unhappy with this encroachment upon their lands, and stirred up by emissaries from the rival city of Atchison, sent a petition to the government asking that something be done.

As a result, the government issued an order to the troops at Fort Leavenworth to drive the settlers off. However, the Leavenworth Town Association quickly got the order delayed and upon assuring the Delaware chiefs that they would pay the price fixed by the government, they were allowed to stay.

In the meantime, several businesses had already been established including the Herald newspaper in the first building erected in Leavenworth, a small warehouse and general store operated by Lewis N. Rees, and the Leavenworth Hotel. The first dwelling was built by a man named on Jerre Clark on Walnut Street. In October, the Murphy & Scruggs saw-mill was established at the mouth of Three Mile Creek, where much of the lumber for future building was cut. On October 8th, W. C. Capels, an elder of the Methodist Church, held the first religious service in the town under the shade of a large tree.

By January 1, 1855, there were 200 inhabitants in the fledgling city. When a post office opened in the general store on March 6th, Lewis Rees became the first postmaster in the town that was officially called Leavenworth City. More businesses also began including a brickyard and another sawmill. Within six months, fully 100 buildings of various kinds had been erected, and by May 1855, Leavenworth City was called home to more than 400 people. The town was incorporated in the summer of 1855 and an election held on September 3rd for councilmen and officers. 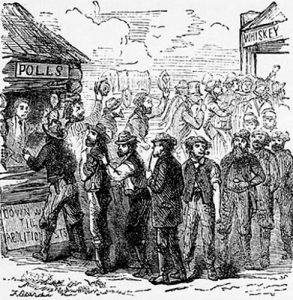 Leavenworth County was established in July 1855 and an election was scheduled to be held in October to determine the county seat. The primary contenders were Leavenworth City, Kickapoo City, and Delaware City.

Like other Kansas counties, the struggle for the county seat was almost vicious and was burdened with fraudulent voters. Two steam ferries, crowded with voters from Weston, Platte City, and other Missouri towns under the pro-slavery thumb, plied between the eastern shore and Kickapoo City and Delaware City. In the end, Kickapoo City won, with Delaware City coming in second, and Leavenworth City third. However, Delaware City claimed that some of her citizens had been barred from the privilege of voting and her polls were thrown open a second day, this time resulting in a win for Delaware City. Afterward, a legal contest ensued between the three towns but, Delaware City was declared the county seat in January 1856.

The early commercial development was rapid, as it became the starting point of the overland transportation company owned and operated by Majors, Russell & Company in the Fall of 1855. Eventually employing more than 500 wagons,  7,500 head of cattle, and nearly 1,800 men, it was a boon for Leavenworth City.

Their arrival brought in numerous new stores and businesses that otherwise, would not have come for years. Salt Lake and California traders soon made their starting point Leavenworth, rather than points in Missouri. Leavenworth was also made the starting-point for the Kansas Stage Company. A small building near the levee was rented by a Lutheran minister for religious purposes. The first school in the community was taught by H. D. McCarty. By October 1855, just one year from the first sale of lots, there were about 1,200 people living in Leavenworth City.