Charles Kenndy was a mountain man who lived near Eagle Nest, New Mexico, that robbed and killed a number of passing travelers as they made their way to Taos.

Kennedy, a big, husky full-bearded man, moved to the Moreno Valley around 1865 with his wife, Rosa, a Ute Indian, and their 3-year old son. The couple then built a traveler’s rest stop in an isolated area at the base of Palo Flechado Pass on the road between Elizabethtown and Taos. After travelers would register at the rest stop, some would disappear never to be heard from again. These traveling strangers were rarely missed in this highly transient area. Evidently, when travelers stopped for a bed and a meal, Charles killed them, stole their valuables, and either burned or buried their bodies. These events might never have been known, except for his wife’s confession, when she fled from him in terror in the fall of 1870. 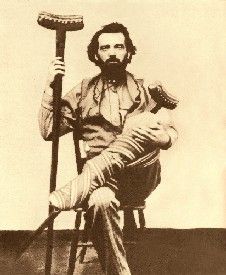 The bleeding woman burst into John Pearson’s saloon, where Clay Allison, Davy Crockett (a nephew of the American frontiersman), and others were whiling away the hours. After she had been helped to a chair, she told the story of how her husband had killed a traveler and their young son. Hysterical, she continued the shocking storytelling of how her husband had been luring travelers, perhaps as many as 14, into their cabin and then murdering them.

On the day that she fled, she had witnessed another traveler who her husband had enticed inside by offering supper. During the meal, the passerby asked his hosts if there were many Indians around. Her unfortunate son made the fatal mistake of responding, “Can’t you smell the one Papa put under the floor?”  At this, Kennedy went into a fury, shot his guest, and bashed his son’s head against the fireplace. He then threw both bodies into the cellar, locked his wife in the house, and drank himself into a stupor. Terrified, the woman waited until her husband passed out, then climbed up through the chimney and escaped to tell her story.

Clay Allison, a hard-drinking, bad-tempered local rancher, who was known for his gunfighting skills, and was almost always around when anything violent happened, led a group in search of Kennedy, while others were sent to search the house for evidence to support the woman’s story. The search provided a number of partially charred human bones still burning in the fire, and two skeletons beneath the house. Later, another skull was found nearby and a witness to one of the murders came forth. Kennedy, still drunk, was quickly found and taken into custody. He was given a pre-trial on October 3, 1870, where the witness appeared, testifying that he had seen Kennedy shoot one of the travelers. 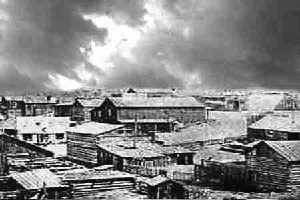 Elizabethtown in the 1890s.

The court ordered that Kennedy be held for action by the grand jury, but rumors began circulating that Kennedy’s lawyer was going to buy his freedom. Three days later, Allison and his companions snatched Kennedy from the jail, threw a rope around his neck, and dragged him by a horse up and down Main Street until long after he was dead. His body was not allowed by the townspeople to be buried in the Catholic cemetery and was interred outside the cemetery boundaries.

Allegedly, Allison staked Kennedy’s head on a fence in front of a saloon in Elizabethtown.