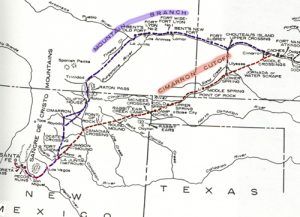 Of the five states located along the Santa Fe Trail, Oklahoma’s growth and development was least affected by the historic trade route. However, Oklahoma played an important role in sustaining travelers along the Cimarron Route – after their encounter with the 60-mile La Jornada – by providing abundant water and campsites.

The smallest portion of the Santa Fe Trail was in Oklahoma. Of the two major trail branches, only the Cimarron Route crossed into the state through the western portion of the Oklahoma panhandle, in modern Cimarron County. The Cimarron Route within Oklahoma was only 46 miles long from the northern border with Colorado southwest to the border with  New Mexico. The lesser-used Aubry Cutoff was also partially within Oklahoma. This route started near Fort Aubrey in western  Kansas, crossed the Arkansas River at the crossing downstream from the fort, forded the Cimarron River in northern Cimarron County, Oklahoma, and ended near Cold Spring Campground, northwest of modern Boise City.

Early Ownership and Occupation of Oklahoma

When trade between Missouri and Santa Fe began in 1821, the lands now comprising the State of Oklahoma were not a state. Like Missouri and Kansas; England, France, and Spain had each laid claim to these lands at various times. When France recognized Spain as the owner of the Province of Louisiana at the end of the Seven Years’ War, this land came under Spanish jurisdiction. From 1763 to 1800 Spain maintained ownership, but with the Treaty of San Ildefoso in 1800, the title was transferred to Napoleonic France, and by 1804, the U.S owned this portion of North America.

However, when acquired from France, the boundaries of the Louisiana Territory were not well defined. This was particularly true of the boundary with Spain’s New World territories, including the Oklahoma panhandle. As part of the 1819 Florida Purchase (or Adams-Onís Treaty), US Secretary of State John Quincy Adams and Spanish diplomat Luis de Onís established the boundary between the United States and Spain as the right (west) bank of the Sabine River, the right (south) bank of the Red River, the 100th meridian, the right (south) bank of the Arkansas River, a line from the headwaters of the Arkansas to the 42nd parallel, and then west on this parallel to the Pacific Ocean. As the Red River and 100th meridian now form parts of the south and western boundaries of Oklahoma, this placed all but the panhandle within the United States.

Before the emigration of eastern tribes, at least four indigenous tribes were located in Oklahoma, including the  Wichita, Arapaho, Cheyenne, and Comanche. The Wichita were located in northern Oklahoma, and the Comanche lands were in the short grass plains in the general vicinity where the states of Kansas, Oklahoma, Colorado, and New Mexico come together. The Cheyenne and Arapaho were located on the west edge of the High Plains in western Kansas, eastern Colorado, and western Oklahoma.

From 1803 until 1830 the US portion of Oklahoma was left as part of Indian country – an unorganized region to which eastern Indian tribes were removed as white settlers encroached upon tribal lands. In fact, the same year that the US government purchased Louisiana, President Thomas Jefferson considered the possibility of exchanging land in the west for tribal lands in the east. Some Indian factions and tribes viewed ceding their land as a way to maintain their culture without continual pressure from whites, but others objected, causing tribal rifts. Voluntary removal of consenting tribes occurred in the first decades of the nineteenth century, with members of the Five Civilized Tribes arriving in Arkansas by 1817. When Missouri petitioned for statehood in 1819, Congress established Arkansas Territory, which included all of the present state of Arkansas and the part of Oklahoma east of the 100th meridian. Beginning in 1820, most of what would become the state of Oklahoma “was divided among the Five Civilized Tribes.”

Before 1825 the boundary between Indian lands and white settlement areas included a strip of present day eastern Oklahoma. Two forts near this border were established to replace Fort Smith, Arkansas, in guarding traders and travelers from Indian attacks along the Indian frontier. The more northern of these was Fort Gibson, located at the forks of the Arkansas, Verdigris, and Grand Rivers. To the south was Fort Towson that was situated near the mouth of the Kiamichi River. In 1825, due to objections from the Cherokee and Choctaw about the encroachment of white settlers, a new treaty was negotiated to adjust the western boundary of Arkansas Territory to the current Arkansas-Oklahoma state line and remove settlers to the area east of the border. Under this Treaty with the Choctaw, 1825, the western half of Arkansas Territory remained officially unorganized Indian Territory, as created under the 1834 renewal of the Indian Trade and Intercourse Act.  The only Euro-Americans legally residing within Indian Territory were Indian agents, missionaries, military personnel, and a few whites who had married into tribes. Despite that ban, Euro-American settlers, primarily from Texas and southern states, began entering this area illegally in the 1820s- 1830s. The panhandle remained part of Spain until Mexican independence in 1821 when it came under Mexican authority. 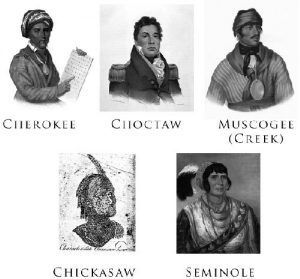 Indian resettlement within Oklahoma mostly involved the southeastern Indian nations (i.e. Cherokee,  Choctaw, Chickasaw, Muscogee [Creek], and Seminole) known together as the Five Civilized Tribes. With the election of President Andrew Jackson in 1828 the issue of Indian removal reached a climax. On May 28, 1830, Congress passed the Indian Removal Act. This act embodied President Andrew Jackson’s Indian policy, calling for the voluntary removal of Indian tribes from the eastern US. By the end of the 1830s, however, this policy shifted from voluntary to forced cession of Indian lands in the East to the United States and the emigration of eastern tribes to reservations west of the boundaries of Missouri and Arkansas. The precedent for this policy change came as eastern Cherokee, objecting to the move that had been agreed to by a faction of the tribe in the 1835 Treaty of New Echota, refused to voluntarily leave their lands, fields, homes, and towns in Georgia.

During the spring of 1838, Major General Winfield Scott was dispatched by the War Department to forcefully remove the Cherokee. In what became known as the Trail of Tears, more than 1000 Cherokee eventually died en route from the heat, unfamiliar diet, unsanitary conditions, and grief over the move. The other four tribes had been forced to remove from the lands in the southeastern US before the Cherokee; although, smaller groups of Seminole arrived in Oklahoma by 1842.

After the Civil War and into the 1880s, additional Indian tribes were removed to Indian Territory. These included indigenous tribes from the west and north, as well as tribes that had previously been removed to Kansas. Among these tribes were the: Delaware, Sac and Fox, Pottawatomie, Shawnee, Peoria, Otoe and Missouria, Kickapoo, Iowa, Ottawa, Miami, Illinois, Mowhawk, Kaskaska, Chippewa, Cayuga, Seneca, Piankashaw, Wea, Tuscarora, Wyandotte, Quapaw, Ponca, Kaw, Pawnee, Arapaho, Cheyenne, Comanche, Kiowa, Kiowa-Apache, and Wichita. Forts Sill, Reno, and Supply were established in the western portion of Indian Territory in an attempt to discourage Indian attacks, especially by the Kiowa, Comanche, Cheyenne, and Arapaho.