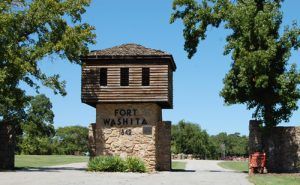 Fort Washita, Oklahoma, was established in 1842 by General Zachary Taylor to protect the Choctaw and Chickasaw Nations from the Plains Indians. The post was the southwestern-most fort in the United States at the time.

After being forced to move from their homelands in the southeastern United States to Indian Territory, the Choctaw and Chickasaw settled in southern Oklahoma. However, this land was traditionally the hunting grounds of several Plains tribes, including the Comanche, Wichita, Caddo, and Kiowa. These indigenous tribes were not happy with the newcomers and occasionally threatened them. 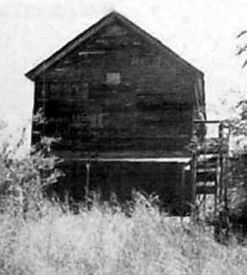 The troops garrisoned at the fort were responsible for protecting the “Civilized” Indians and provided quarters for the Indian Agency to the two tribes. Families and slaves soon followed the soldiers to the frontier fort. Though officers’ families stayed in assigned quarters, enlisted men were allotted only ½ of a bed in a barracks. If they had families, their wives and children lived in a small settlement that formed just to the west of the fort.

First called Rugglesville for Major Daniel Ruggles, who commanded the fort after the Mexican-American War, this community was not a good family environment. It was filled with saloons, gambling halls, and bordellos. The frontier community would eventually support a general store, a post office, restaurants, and hotels. Colonel William Harney built a billiards hall, bowling alley, and tavern on the post in 1844. The town would later be called Hatsboro but was entirely gone by the turn of the century.

When the Mexican-American War broke out in 1846, activity at the fort increased as it became a staging point for the conflict. The number of troops garrisoned at the post increased from an average of 150 to almost 2,000 during this time.

After the war was over, gold was discovered in California in 1849, prompting thousands of people to head west in search of their fortunes. Many of these emigrants chose the more southern route to California to avoid the cold winters, the snow, and cholera outbreaks that plagued the northern routes. However, the southern route was not without peril, being subject to attacks from the Plains Indians. Due to the danger, many emigrating parties rendezvoused at Fort Washita before making the long journey. 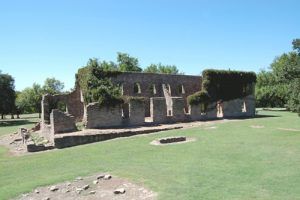 In 1850 General Matthew Arbuckle, commander at Fort Smith, Arkansas, ordered the establishment of a fort west of Fort Washita to protect California emigrants. This fort became Fort Arbuckle and was commanded by General William G. Belknap. However, when Belknap fell ill in the fall of 1851 and was being transferred to Fort Gibson, Oklahoma to see his family he died along the way on November 10, 1851, and was interred at Fort Washita.

By 1858 there were an east barracks, hospital, and surgeon’s quarters, all built from native stone and several wooden structures. A corral and stables on the hillside southwest of the fort supported cavalry operations, which comprised most of the forces assigned to Fort Washita until the 1850s. Afterward, the post served as a United States Army Field Artillery School, at which time several artillery units were assigned to the fort in addition to infantry and cavalry. 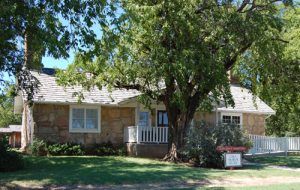 Fort Washita’s importance as a military post waned as the frontier moved westward, the Chickasaw and Choctaw Indians grew more settled, and incursions by the Plains Indians lessened. As a result, the fort was closed briefly in February 1858 but was reopened in December of the same year due to an increased number of Comanche raids.

When the Civil War broke out, Union forces abandoned the fort in April 1861 and was immediately taken over by Confederate troops. Though no battles occurred at the post, it became an important Confederate supply depot and was the headquarters of Brigadier General Douglas Cooper for most of the war. The fort stayed in Confederate hands until the end of the war, at which time the southern forces burned the fort, and it was never reoccupied. 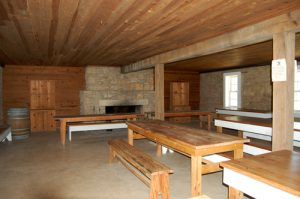 Interior of Fort Washita Barracks before they were destroyed by fire

In 1870, the War Department transferred the fort to the Department of the Interior, and its buildings remained unused and deteriorating for the next two decades. In 1897, the communal lands of the Chickasaw Nation, including Fort Washita, were divided up and allotments given to individual Chickasaw citizens.

The former military land was given over to the Colbert family, a prominent Chickasaw family. Charles Colbert turned the west barracks into a personal home, and the remaining buildings were used as living quarters and agricultural buildings for the next 60 years. The Colberts also used the cemetery as a family cemetery and allotting some land to area families for their use. The old west barracks continued to serve as Colbert’s household until it burned down in 1917.

In 1962, the Oklahoma Historical Society acquired the site that painstakingly restored, rebuilt, and preserved many buildings and ruins. In 1965, the historic fort was designated as a National Historic Landmark.

Sadly, on September 25, 2010, the reconstructed south barracks were destroyed by fire. Three teens were arrested for setting the fire and were sentenced. 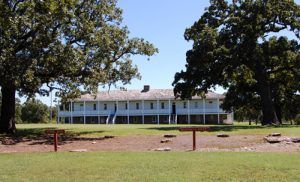 South barracks at Fort Washita before the fire 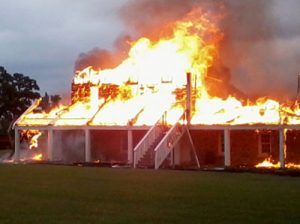 In 2016, the Chickasaw Nation partnered with the Oklahoma Historical Society to assume responsibility and management of Fort Washita. Today, visitors to Fort Washita can tour restored structures, witness Civil War reenactments, and take part in the yearly Fur Trade Era Rendezvous to experience what life was like before and during the Civil War. Other events throughout the year include storytelling, outdoor movies, and special seasonal and holiday events that the whole family can enjoy. In addition to the many buildings and foundations, the post cemetery still exists and the Colbert Cemetery, a Chickasaw burial ground, and a  Confederate Cemetery.

Fort Washita is located some 15 miles northwest of Durant, Oklahoma, at 3348 State Road 199.