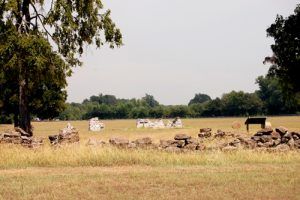 Fort Towson, Oklahoma was established in May 1824 and was originally called “Cantonment Towson,” in honor of Nathaniel Towson, Paymaster General of the Army. Originally, the fort served as an outpost on the border between the United States and Texas, which was, at that time, part of Mexico. At this time, the area was rife with conflict between white settlers and Indians, as well as numerous lawless elements, and threats from Mexico. In 1829, the post was abandoned but soon reestablished as “Camp Phoenix” to protect the Choctaw Nation. It was renamed back to Fort Towson in 1831.

During the 1830s, troops were responsible for protecting settlers bound for Texas and served as a dispersal point for the displaced Choctaw and Chickasaw Indians when they were moved to Indian Territory from their homes in the Southeastern United States. In 1842, troops from Fort Towson helped in the construction of Fort Washita 70 miles to the west and was an important staging area for U.S. forces during the Mexican War of 1846.

The post continued to be occupied until 1854 when it was turned over to the Choctaw Indian Agency. However, when the Civil War began, southern forces took over the post, which eventually became the headquarters of Confederate General Samuel B. Maxey. Later, it was the last stronghold of General Stand Watie, who surrendered to federal troops at the post in June 1865 following the Battle of Doaksville. Afterward, the fort was permanently abandoned.

The Oklahoma Historical Society acquired the site in 1960, but there was little left of the old post. Today, the historic site, added to the National Register of Historic Place in 1970, features a museum about two miles northeast of the present community of Fort Towson, Oklahoma.