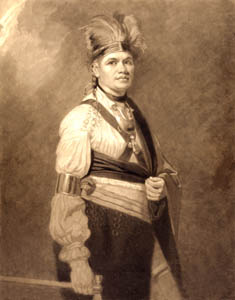 The Mohawk Indians were once the most easterly tribe of the Five Nations of the Iroquoian Confederacy.

Their original homeland was in the valley of the Mohawk River in upstate New York, west of the Hudson River, and extending into southern Canada and Vermont primarily around Lake Ontario and the St Lawrence River, but it also extended south to New Jersey and  Pennsylvania.

As part of the Iroquoian Confederacy, the fierce warlike Mohawk were known as the Keepers of the Eastern Door – the traditional guardians against invasions from the east.

The Mohawk tribe lived in large fortified villages of Longhouses in the winter and in the summer, the men traveled on hunting expeditions while temporarily living in temporary wigwams. The people practiced hunting, fishing, and farming and traveled extensively in the territory along rivers in elm bark canoes for trading and war expeditions.

Because of their warlike nature, the Mohawk were feared due to their brutal attacks and the merciless way they treated captives. Along with the other tribes of the Iroquois Confederacy, they waged warfare on all of their neighboring tribes until they were all conquered.

Their first contact with European settlers came in the form of conflict, fighting against French explorer Samuel De Champlain. In the 17th century, the Mohawk encountered both the Dutch, who went up the Hudson River and established a trading post in 1614, and the French, who came south present-day Quebec.

Before long, the Mohawk were regularly trading the Dutch, Swedish, French, and British. During this time the Mohawk fought with the Huron in the Beaver Wars for control of the fur trade with the Europeans. Jesuit missionaries were also active with the tribe seeking converts to Catholicism.

The Mohawk became allied to the British against the French during the French and Indian War.

After the American Revolution, the British ceded their claim to land in the colonies, and the Americans forced their allies, the Mohawk and others, to give up their territories in New York. Most of the Mohawk then migrated to Canada, 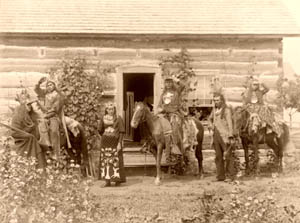