Just west of Yukon, Oklahoma, lies the old Route 66 town of El Reno. Built at the intersection of two historic highways – the Old Chisholm Trail and Route 66, the town’s less than 20,000 residents are enthusiastic Mother Road and history boosters.

Before the town of El Reno was born, a man by the name of Jesse Chisholm established the Chisholm Trail in 1866, where hundreds of herds of cattle would be driven north from Texas to Kansas, where they would be loaded on trains headed east. On top of Concho Hill north of present-day El Reno, the Caddo Springs Stage Station was established and soon became a major stopping point between Wichita, Kansas and Fort Sill, Oklahoma.

In the same year, the Cheyenne–Arapaho Reservation was established by a treaty negotiated, in part by Black Kettle, considered the greatest chief of the Southern Cheyenne. Black Kettle was later killed by General George Custer at the Battle of the Washita in November 1868 near the present town of Cheyenne. The Cheyenne and Arapaho tribes were moved from eastern Colorado to land south of the Arkansas River. The Darlington Indian Agency was established in August 1869, three miles north and two miles west of present-day El Reno. The settlement and the agency took its name from Brinton Darlington, the agency’s first superintendent. Soon, the Cheyenne Indian School was established two miles north of Darlington in 1871.

In 1874, Fort Reno was established to quell the unrest among the Indians in the region. First known as the “Camp Near Cheyenne Agency,” the location was later named Fort Reno in 1876 in honor of Major General Jesse L. Reno, who had been killed in the Civil War. The soldiers soon built a stockade where Lieutenant General Philip Sheridan conducted his Indian campaigns from headquarters established at the fort.

The United States Cavalry units soon calmed down the uprisings in the area but stayed on to maintain the peace. 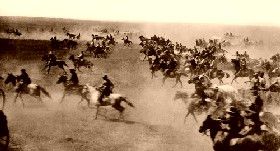 On April 22, 1889, the area’s unassigned lands were opened up for settlement, which quickly became known as the great Oklahoma land run. When the signal was given along the outer boundaries, the Fort Reno soldiers were assigned to keep order among the many rushing pioneers flooding the area.

No sooner was the land opened for settlement when the Rock Island Railroad began to build a line from Caldwell, Kansas, to the Canadian River’s south bank. Near Fort Reno, a settlement had sprung up called Reno City, which quickly decided to relocate nearer the railroad.

Buildings, pioneers, and businesses wasted no time uprooting and moving the entire town, which they called El Reno. In January 1890, the first train arrived in the community, which quickly became a rail center for the productive wheat harvests of Canadian County. In March of 1890, El Reno has named the county seat. 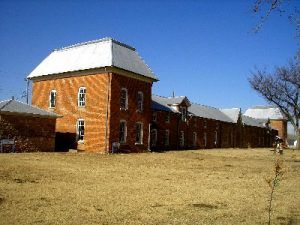 In 1892 and again in 1894, additional unassigned lands were opened up to settlers, which brought more people to the new settlement of El Reno.

On August 6, 1901, the old Irving School in El Reno was the lottery drawing site for the last free territory land for settlement. These lands formerly allocated to the Wichita, Caddo, Comanche, Kiowa, and Apache tribes were the final lands opened to white settlers.

When Route 66 was built, El Reno, like hundreds of its counterpart cities, quickly obliged its many travelers with a crop of restaurants, motels, and service stations along the road.

Today, El Reno provides travelers with a peek at many old icons of the Mother Road as well as a look at the Old West. Take a ride on the Heritage Express Trolley, the only rail-based trolley in Oklahoma, and be sure to visit the Canadian County Historical Museum in the fully restored old Rock Island Depot, which features all manner of area history. 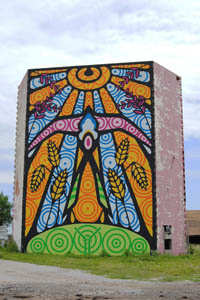 The first three, Calumet, Geary, and Bridgeport, were cut off very early in the Mother Road’s history when the El Reno bypass took them off the route in 1933.