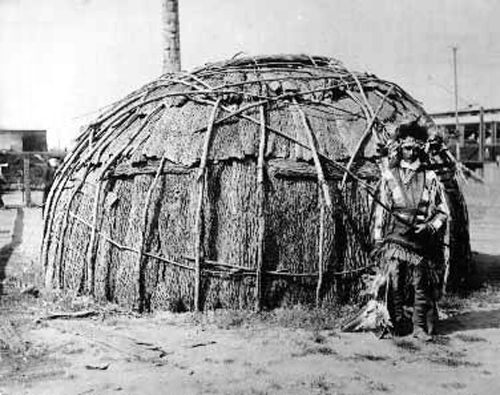 Before contact with Europeans, the Kickapoo lived in northwest Ohio and southern Michigan in the area between Lake Erie and Lake Michigan. By common tradition, the Kickapoo and Shawnee believe they were once a single tribe but separated after an argument over a bear’s paw. When the white man pushed west, the Kickapoo migrated, first to Wisconsin, then Illinois. By treaty, they were relocated to southern Missouri, but less than half stayed, wondering south and west. Fiercely independent, many Kickapoo people fled all the way to Mexico rather than surrender to the Americans. Of those that went to Mexico, approximately half returned to the United States and were sent to Indian Territory in Oklahoma.

Kickapoo comes from their word “Kiwigapawa,” means “he stands about” or “he moves about.” The tribe of the central Algonquian group formed a division with the Sac and Fox, with whom they had close ethnic and linguistic connections. The Kickapoo first appeared in written history about 1667-70 when they were found by Allouez near the portage between the Fox and Wisconsin Rivers. The Kickapoo were associated with other more powerful tribes occupying the country watered by the Ohio, Wabash, and Miami Rivers, in which they participated in a treaty made at Greenville, Ohio in 1795 by General Wayne, and in those of 1803, at Fort Wayne and Vincennes, Indiana. By these and succeeding treaties, the tribe ceded all their lands on the Wabash, White, and Vermilion Rivers.

They also ceded lands in the valley of the Illinois River, of which “the said Kickapoo tribe claim a large portion by descent from their ancestors, and the balance by conquest from the Illinois nation, and uninterrupted possession for more than half a century.”

In consideration of these cessions, they were given a tract of land situated on, and south of, the Osage River in Missouri. The tribe was living on the Wabash River at the time this treaty was made and removed to Missouri the following year.

On October 24, 1832, the Kickapoo ceded their country on the Osage River in Missouri, and, on November 26th of the same year, were granted a reservation situated north of the Delaware tribe in Kansas and were also to receive an annual subsidy.

However, by another treaty on May 18, 1854, their Kansas land was ceded to the United States, “saving and reserving in the western part thereof, 150,000 acres for a future and permanent home” for the tribe. By the terms of the treaty, the specified sum of $20,000 was to be paid to the tribe, they to support themselves thereafter.

June 28, 1862, a treaty was made, setting apart a portion of the reserve to be divided and held in severalty by members of the tribe, the remainder to be sold, the Atchison & Pike’s Peak Railroad Company having the privilege of buying the lands at $1.25 per acre. The company bought 123,832 acres at that price, lying principally in Brown County, Kansas. The lands were advertised for sale in 1866. Those of the tribe who chose to remove to the Indian Territory, numbering about 600, were allotted a portion of the Sac and Fox Reservation.

The first location of the Kickapoo in Kansas was on the southeast corner of their reservation, near Fort Leavenworth. They were more industrious and their habits were generally more correct than those of many of the tribes to the north. 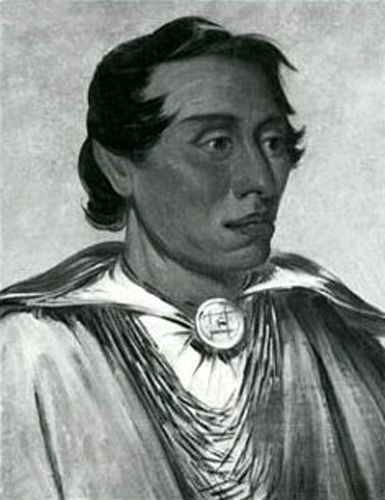 The more rapid improvement of this tribe was in a large measure owing to the influence of Kennekuk, a Kickapoo Prophet, who moved to the Indian Territory with the tribe, and founded a religious sect among them, teaching and practicing the doctrines of sobriety, industry, and honesty. The Prophet numbered among his adherents a large proportion of the tribe.