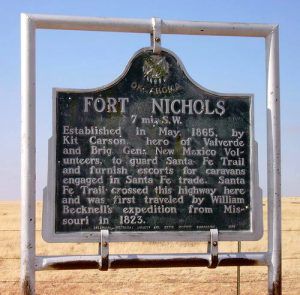 Camp Nichols, also known as Fort Nichols or Camp Nichols Ranch, this historic fortification was located about 3.5 miles northwest of present-day Wheeless, Oklahoma. Founded by Colonel Kit Carson, the noted soldier, trapper, and scout, it was occupied for only a few months in 1865. Established to protect travelers on the Cimarron Route of the Santa Fe Trail from raids by the Kiowa and Comanche Indians, it was the only military site on the trail in Oklahoma.

Thought to have been named in honor of Captain Charles P. Nichols of the First California Cavalry, soldiers built a stone wall around the parade ground, officers’ quarters, hospital, commissary, and other outbuildings. Some 300 California and New Mexico troops were quartered in dugouts and tents.

Wagon trains traveling between Fort Dodge, Kansas and Fort Union, New Mexico stopped at Camp Nichols frequently. It never officially became a “fort” and was only utilized for a few short months. It was abandoned in November 1865.

Today, there is nothing left of the fort other than a few tumbled stones. Though placed on the National Register of Historic Places in 1966, it is located on private property and is not accessible to the public. Wagon ruts can still be seen about 0.5 miles south of the fort site.