The Atchison, Topeka, and Santa Fe Railway (AT&SF), more often referred to as the “Santa Fe Railroad,” was first chartered by the Kansas Territorial Legislature in February 1859 and called the Atchison-Topeka Railroad. The Atchison & Topeka Company was organized on February 11 of that year.

Four years later, in November 1863, “Santa Fe” was added to the name, but ironically, the railroad’s main line never reached there as the terrain was too difficult to lay the tracks. Instead, the city of Albuquerque served New Mexico and the Santa Fe area. 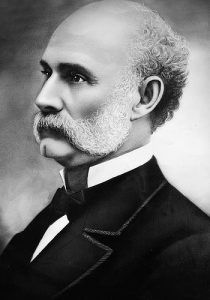 In 1864 Congress made a large grant of land for the benefit of the road and counties through which it was to run voted bonds to aid in its construction. Work was commenced at Topeka, Kansas, in the fall of 1868, and the following year was finished to Burlingame, a distance of 27 miles. When the track was completed to Wakarusa, 13 miles from Topeka, an excursion was run there from Topeka to celebrate the event. Cyrus K. Holliday, who planned the enterprise and was the first president of the company, in a speech on that excursion, predicted that one day the western terminus of the road would be at some point on the Pacific coast. It is said that when the prophecy was uttered, one incredulous individual, unable to control his mirth at the thought of that little crooked road becoming a great trans-continental thoroughfare, threw himself on the grass and exclaimed, “Oh, the old fool!” Yet the prediction turned out to be correct.

As the railroad was first being built, many of the tracks were laid directly over the wagon ruts of the Santa Fe Trail, and in 1869, the first general office building of the company was built in Topeka. This building also served as a passenger station and freight depot. When the line was extended to Newton, Kansas in 1871, the railroad assured its success by becoming a major cattle shipper. Later, it would also extend to Wichita and Dodge City, making those settlements into instant “cowtowns.” 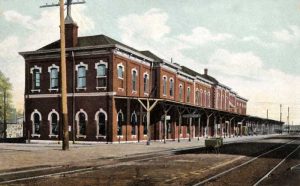 In January 1872, the division between Atchison and Topeka was graded, but the track was not laid until later. As the railroad continued to expand, it increased its demand for its services and profitability by selling farmland from the land grants Congress had awarded it.

Rather than turn its survey southward at Dodge City, AT&SF headed southwest over Raton Pass because of coal deposits near Trinidad, Colorado, and Raton, New Mexico. In 1873 the mainline of the road was completed to the Kansas/Colorado state line and connected to Pueblo, Colorado, in 1876.

The Denver & Rio Grande Railroad (D&RG) was also aiming at Raton Pass, but AT&SF crews arose early in 1878 and were hard at work with picks and shovels before the D&RG crews showed up. During this time, the two railroads had a series of skirmishes over occupancy of the Royal Gorge west of Cañon City, Colorado which resulted in physical confrontations leading to two years of armed conflict known as the Royal Gorge Railroad War. The feud continued until the Federal Government intervened, and a settlement was agreed to in February 1880. 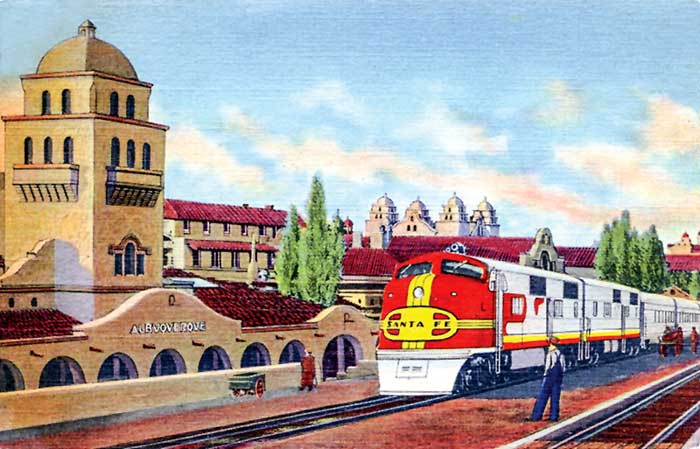 The AT&SF reached Albuquerque in 1880, and Santa Fe was served along a short branch from Lamy, New Mexico. In March 1881, the AT&SF connected with the Southern Pacific Railroad at Deming, New Mexico, forming the second transcontinental rail route. The railroad was then built southwest from Benson, Arizona, to Nogales on the Mexican border, where it connected with the Sonora Railway.

Afterward, the Santa Fe began to expand in California and took control of several lines, including the Gulf, Colorado & Santa Fe Railway in 1886 and a line between Wichita and Fort Worth in 1887; lines from Kansas City to Chicago, Illinois; from Kiowa, Kansas to Amarillo, Texas and from Pueblo to Denver, Colorado in 1888; and purchased the Frisco and the Colorado Midland Railway in 1890. By January 1890, the entire system consisted of some 7,500 miles of track. 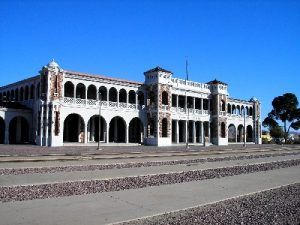 AT&SF purchased the Southern California Railway in January 1906, and with this purchase, they also acquired the Los Angeles and San Gabriel Valley Railroad and the California Central Railway.

Subsequent expansion of the Santa Fe Railway encompassed lines from Amarillo to Pecos, Texas in 1899; from Ash Fork, Arizona to Phoenix, from Williams, Arizona to the Grand Canyon in 1901, and other smaller lines in New Mexico and Texas. Continuing their expansion in the next few years, they also took over several short railroads and built new lines in California. 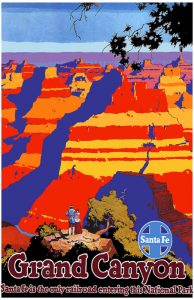 When the railroad began to make its way into the Grand Canyon, the Fred Harvey Company built the El Tovar Hotel in 1905. Realizing that National Parks were becoming a great attraction for the public – and thus generating revenue-producing passengers – the AT&SF then successfully led the lobbying effort to establish Grand Canyon National Park (1919). The railroad continued to build into National Parks and other attractions, including the Petrified Forest National Park.

By 1912, the Atchison, Topeka & Santa Fe Railroad encompassed nearly 10,000 miles of road. According to the railroad commissioner’s report, it included 2,659 miles in Kansas, and the company expended over $3,000,000 in shops and office buildings in Topeka.

Becoming one of the first significant freight operators at one time, the enterprise included a tugboat fleet, bus service, ferryboats, and an airline — the short-lived Santa Fe Skyway. Its bus line extended passenger transportation to areas not accessible by rail, and ferryboats on the San Francisco Bay allowed travelers to complete their westward journeys to the Pacific Ocean. 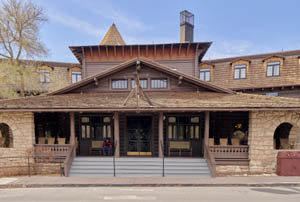 1905 El Tovar Hotel was built by Fred Harvey as part of the Santa Fe Railroad System. Photo by Carol Highsmith.

AT&SF was also widely known for its passenger train service in the first half of the 20th century and introduced many innovations in passenger rail travel, including dining cars on its passenger trains in 1891 and Harvey House restaurants and hotels strategically located throughout the system. Several Harvey Houses still survive – most notably the El Tovar positioned right alongside the Grand Canyon and La Posada Hotel in Winslow, Arizona. The railroad also began using new passenger cars such as the Chicago-Los Angeles El Capitan and Super Chief that included “Big Dome” Lounge cars and double-decker Hi-Level cars. Because long stretches of its mainline traversed areas without water, Santa Fe was one of the first buyers of diesel locomotives for freight service. 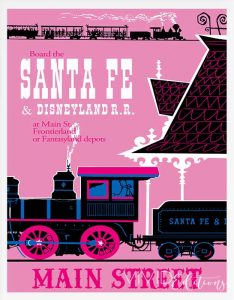 After World War II, the nation began to travel more than ever, and the railroad stepped in to add even more lines. On March 29, 1955, the railway was one of many companies that sponsored attractions in Disneyland with its 5-year sponsorship of all Disneyland trains and stations until 1974.

AT&SF began to talk about mergers in the 1980s and looked at a proposed merger with the Southern Pacific. However, the merger was denied by the Interstate Commerce Commission because it would create too many duplicate routes. However, another merger was soon to come when the AT&SF formally merged with the Burlington Northern Railroad to form the Burlington Northern & Santa Fe Railway in December 1996. 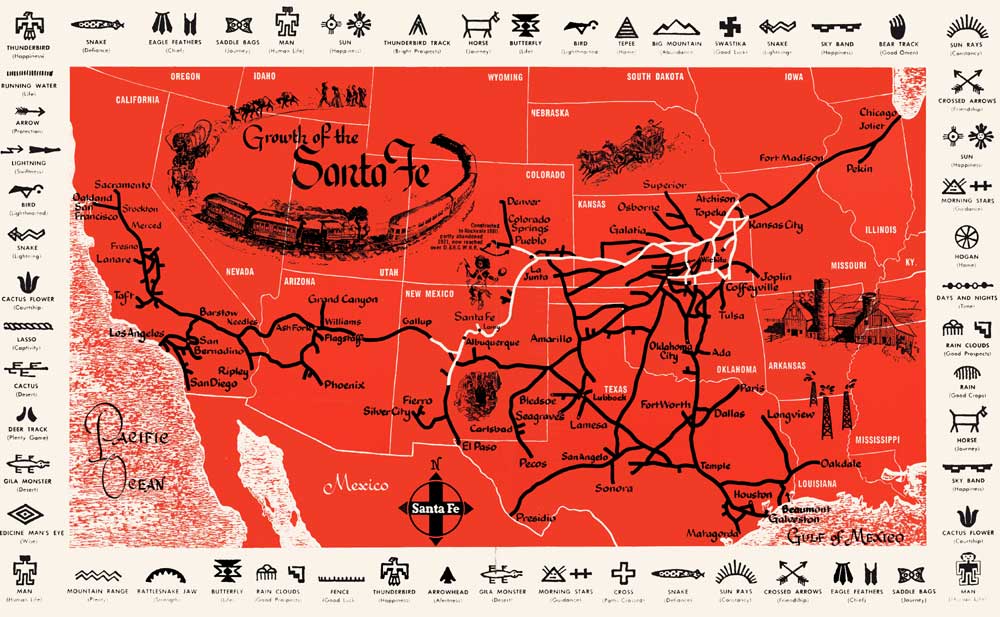