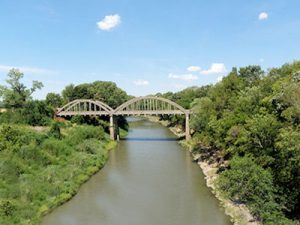 The Verdigris River, a tributary of the Arkansas River in southeastern Kansas and northeastern Oklahoma, is about 280 miles long.

It has a history dating back more than two centuries — mentioned by Zebulon Montgomery Pike during his visit to the area in 1806 and also by Thomas Nuttall in 1818. The river flows through a rich country that in the early days produced much in the way of furs. A number of trading posts were located along its course from time to time, the most important of which was probably that operated by a man named Hugh Glenn in 1819, located at a point about a mile above its confluence with the Arkansas River. Chief Clermont’s band of Osage Indians was located on the stream about this time and is mentioned by Stephen H. Long in his travels.

By the treaty of 1834 with the Cherokee Indians, the Verdigris River was named as a part of the boundary of their lands. The name is derived from the French words vert, meaning “green,” and gris, meaning “grey.”

Verdigris River at the Port of Catoosa, Oklahoma by Dave Alexander.

The stream has its source in several small streams, one of which rises in eastern Chase County, one in northern Greenwood County, and two in southern Lyon County, Kansas. It flows in a southeasterly direction across Greenwood County, the extreme southwestern corner of Woodson County, Wilson, and Montgomery Counties, entering Oklahoma almost due south of Coffeyville. From there, the stream flows through the counties of Nowata, Rogers, and Wagoner, Oklahoma, uniting with the Arkansas River near the town of Wybark, about three miles from Fort Gibson. Among the more important tributaries of the Verdigris are Willow, Homer, Sandy, Drum, Big Hill, Pumpkin, and Onion Creeks, and Paw and Fall Rivers in Kansas, and Big Caney and Little Verdigris Rivers, Bird Creek and about two dozen smaller streams in Oklahoma.

Dams built by the U.S. Army Corps of Engineers cause the Verdigris River to form Toronto Lake near Toronto, Kansas, and Oologah Lake near Oologah, Oklahoma.

From just north of Catoosa, Oklahoma to its confluence with the Arkansas River, barge traffic is maintained on the river as part of the McClellan-Kerr Navigation System, which consists of a series of locks and dams on both streams and allows commercial navigation between the Tulsa area and the Mississippi River.

History Along the Arkansas River