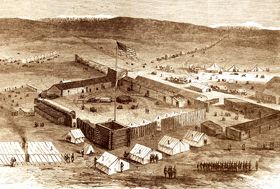 Fort Supply, Oklahoma, was initially established as “Camp of Supply” on November 18, 1868. The post’s original purpose was to support General Philip Sheridan’s winter campaign against the Southern Plains Indians. Located in what was then known as the Cherokee Outlet in western Indian Territory, it was almost immediately occupied by Lieutenant Colonel George Custer and the Seventh U.S. Cavalry. From here, he led his troops south to the banks of the Washita River to destroy the village of the Cheyenne Indian Chief Black Kettle in what became known as the Battle of the Washita on November 27, 1868.

Later, the camp served to protect the Cheyenne and Arapaho reservations from incursions by white settlers and, in 1878, was renamed Fort Supply following its role in the Red River War of 1874-1875. The post was also responsible for safely escorting cattle drives along the trails from Texas to Kansas.

By 1880, the Indian Wars on the Southern Plains were over, and the post was in bad repair. Though the Department of Missouri recommended its closing, General Philip Sheridan opposed the idea and established the Fort Supply Military Reservation. It soon became a hub of transportation, with troops building roads and telegraph lines that linked the forts and reservations and protecting travelers along the many trails.

Following the opening of the Cherokee Outlet to white settlement, Fort Supply was officially closed in September 1894 and turned over to the Department of Interior.

In 1908, Oklahoma’s first state-operated mental institution was established at the old post and which is now called the Western State Psychiatric Center. In 1969, the Oklahoma Historical Society assumed responsibility for the five remaining army period buildings, designated as a National Historic District in 1971.

Since 1998, the William S. Key Correctional Center, a minimum-security prison facility, has occupied most of the old post and hospital grounds.

Today; however, the remaining buildings, including the Ordnance Sergeant’s Quarters, Civilian Employee Quarters, Officers’ Quarters, and a Guard House, can still be seen. A Visitor’s Center and Museum are also available for visitors.

East of the old post on US 270 is the old Fort Supply Cemetery. Though it includes numerous historic graves, the formerly buried soldiers were moved to Leavenworth, Kansas, when the fort was officially closed.

The historic post is located in Fort Supply, Woodward County, in northwest Oklahoma.