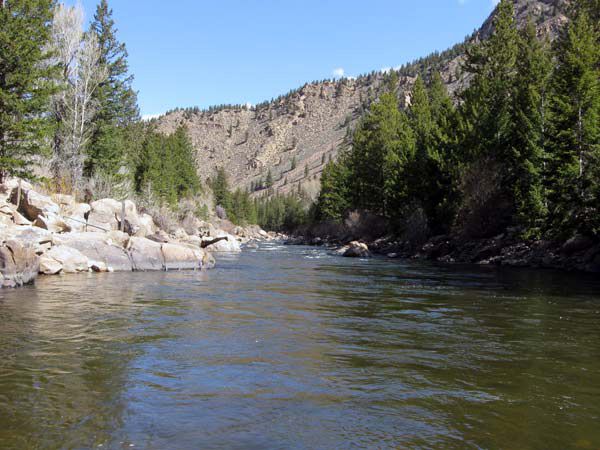 The Arkansas River below Granite, Colorado

A major tributary of the Mississippi River, the Arkansas River generally flows to the east and southeast through the states of Colorado, Kansas, Oklahoma, and Arkansas. At 1,469 miles long, it is the sixth-longest river in the United States and the second-longest tributary in the Mississippi-Missouri system. Its origin is in the Rocky Mountains near Leadville, Colorado, and its mouth is at Napoleon, Arkansas.

The earliest account of this river is to be found in the narratives of the Coronado Expedition of 1540-1541, in which the river was given the name “St. Peter’s and St. Paul’s River.” Father Jacques Marquette names it on his map of 1673. The Mexicans named it “Rio Napete,” but the river acquired the name “Akansa” from the early French voyagers on account of a tribe of the Dakota or Osage Indians that lived near its mouth. 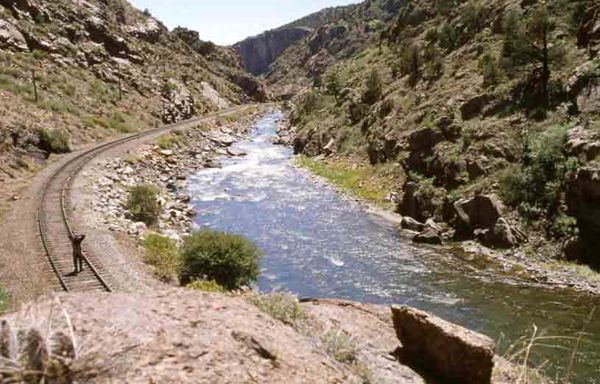 Arkansas River near the Royal Gorge in Colorado.

At its headwaters, the Arkansas River runs as a steep mountain torrent through the Rockies in its narrow valley, dropping about 4,600 feet, creating The Numbers and Brown’s Canyon near Buena Vista, Colorado and the Royal Gorge at Canon City, Colorado, which see extensive whitewater rafting in the spring and summer. The Arkansas River widens as it enters the Great Plains, taking an eastward course. Along the plains, the channel is very shallow, in some places the banks being less than five feet above the low water and the channel as much as 3/4 of a mile wide. It enters Kansas in Hamilton County, traversing more than 300 miles before snaking its way into northern Oklahoma to Tulsa and making its way to Arkansas. 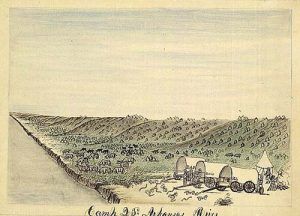 In the past, numerous bands of Native Americans lived and traveled along the Arkansas River long before Europeans ever discovered it. In 1819 the Adams-Onís Treaty established the Arkansas River as part of the frontier between the United States and Spanish Mexico, which remained until the annexation of Texas and the Mexican-American War in 1846. Later, the Santa Fe Trail followed the Arkansas River through much of Kansas.

In the 19th century, the river was rarely navigable above Fort Smith, Arkansas, though the channel was open to boats to a point much higher up in times of flood. In 1854, in describing the territories of Kansas and Nebraska, a writer in the New York Tribune gave Fort Mann (near Dodge City) as the “head of navigation” on the stream.

Today, the McClellan-Kerr Arkansas River Navigation System begins at the Port of Catoosa near Tulsa on the Verdigris River, which runs via an extensive Lock and Dam system to the Mississippi River. Through Oklahoma and Arkansas, dams have artificially deepened and widened the Arkansas River to build it into a commercially navigable body of water. From the mouth of the Verdigris River until the McClellan-Kerr system moves over to the White River near Arkansas Post, the Arkansas River sustains commercial barge traffic and passenger and recreational use. The river is navigable by barges and large river craft to Muskogee, Oklahoma; however, above Muskogee, the waterway is navigable only by small craft such as rafts or canoes.

Over the years, the water flow in the Arkansas River has gradually diminished as farmers in eastern Colorado and western Kansas have diverted the flow for irrigation purposes.

In addition to whitewater rafting in Colorado and recreational use in Oklahoma, the river also provides exceptional trout fishing in several areas.

Tributaries include the Canadian River and the Cimarron River (both flowing from northeastern New Mexico) and the Salt Fork Arkansas River.