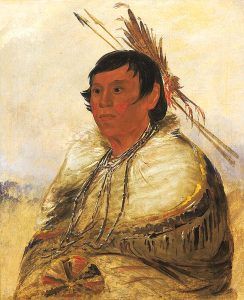 The Piankashaw were members of the Miami Indians who lived apart from the Miami Nation. The Piankeshaw originally lived in western Indiana and Ohio and were closely allied with the Wea tribe. They were generally regarded as being “friendly” towards white settlers, often intermarrying with French traders, and were treated as equals by residents of New France.

The Piankeshaw generally sided with the Americans during the American Revolution and took no part in the Northwest Indian Wars that followed. However, they did suffer retaliation for attacks made by other native tribes, even though George Washington had issued a proclamation forbidding harm to them. During the late 18th century, the Piankeshaw population began to decline, with many leaving and joining other Miami tribes and others joining tribes aligned with the British.

Despite their overall good relations with the United States, some Piankeshaw did not like the new settlers and participated with tribes to attack Americans. This led to increasing tension among many of the remaining members, who joined the Wea and Kaskaskia tribes. By 1818, Piankeshaw Chief Chekommia signed a treaty selling the rights to much of their land because their numbers had been reduced to such an extent that there were not enough of them to use the land.

Today, the descendants of the Piankeshaw, along with the Kaskaskia and Wea, are enrolled in the federally recognized Peoria Tribe of Indians of Oklahoma.