Fort Gibson, Oklahoma, was one of the most important posts on the “Permanent Indian Frontier.” The first fort established in Indian Territory was actively involved in the problems associated with the relocation of the Five Civilized Tribes from the Southeast. A frontier hub of commerce and military activity, it was a key transportation point and a testing place for such newly activated organizations as the Ranger units and Dragoon Regiments.

Established in 1824 by Colonel Matthew Arbuckle on the east bank of the Grand River just above its confluence with the Verdigris and Arkansas Rivers, the fort was responsible for keeping the peace between the Osage, who opposed any intrusion into their territory, and the Cherokee, who were already filtering into Indian Territory. 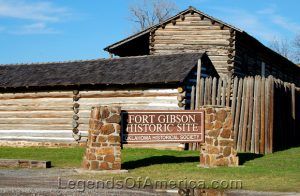 The post replaced Fort Smith, Arkansas, which had been too far south to control the Osage effectively and was to remain inactive, except for several months, until 1839. During the period of Indian removal, in the 1830s and 1840s, the Fort Gibson garrison helped receive, care for, settle, and enforce peace among immigrant Cherokee, Creek, Choctaw, Seminole, and Chickasaw, as well as attempted to protect them from the Plains Indians. Troops provided escorts for surveyors marking the boundaries of Indian lands; established other posts in Indian Territory, such as Forts Coffee and Wayne and Camp Holmes; laid out a network of military roads; and tried to control the illegal liquor traffic.

In 1834 the fort was the base for the Dragoon Expedition, originally under the command of Colonel Henry Leavenworth, who died of fever en route. His successor, Colonel Henry Dodge, met with some of the southern Plains tribes at the north fork of the Red River and persuaded them to send delegates to Fort Gibson for negotiations. As a result, in 1835, the tribes made their first treaties with the U.S. Government at Camp Holmes, Oklahoma. 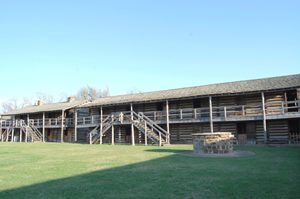 Fort Gibson was also a center of trade and travel. Located at a point beyond which river navigation was virtually impossible, it was a supply depot for a large area. Keelboats and later river steamers came up the Arkansas River to the fort a few months each year and unloaded passengers, military stores, and Indian trade goods. Traders furnished return cargoes. The Texas Road, which ran from north to south and linked the growing American settlements in Texas with the Missouri River Valley, passed by the fort, which became a way station for emigrants, freighters, and traders. The troops also provided escorts for road traffic. The fort continued to be a transportation and freighting center until the arrival of the Missouri, Kansas, and Texas Railroad in 1872.

Originally a four-company post, the fort was expanded in 1831 to accommodate a regiment, and it became the district headquarters, which overtaxed its limited capacity. Situated on low ground, it was also subject to flooding and threatened by malaria. In 1846 construction began on a new post on the hill overlooking the old site. But the project proceeded slowly, and by 1857 only one stone building, the commissary storehouse, had been finished. That year, the Cherokee requested that the fort be evacuated and because the frontier had moved westward, the Army abandoned it, and the tribe took possession. 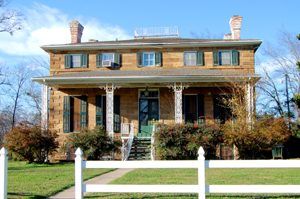 At the outbreak of the Civil War, the Confederates occupied the fort, but in 1863 Union forces made it a Federal stronghold in Indian Territory and sought to strengthen the loyal element of the Cherokee. Regular troops replaced the Volunteers in 1866 and garrisoned the post until 1890. During this period, the fort on the hill was completed; it consisted of seven large stone buildings and ten frame ones.

Although the original fort has long since disappeared, the State of Oklahoma, under a Works Progress Administration (WPA) grant, completed in 1936 on a 55-acre tract a reconstruction of the original log stockade and several outlying log buildings almost on the original site. Except for using more durable materials, especially pine timber and lime chinking, the reconstruction is faithful to the original. Interpretive markers guide the visitor.

The second fort site is on the ridge to the east overlooking the reconstructed stockade. Stone buildings, some now private homes, survive in various stages of repair, together with some ruins. A two-story stone barracks, which has porches running its length on both levels, is the most imposing structure and is in good condition. Owned by the State historical society, it is a private residence. One mile east of the town of Fort Gibson is the Fort Gibson National Cemetery. Many soldiers buried there were removed from Oklahoma Forts Towson, Arbuckle, and Washita.

Designated as a national historic landmark in 1960, the Fort Gibson Historic Site stands as a museum that interprets its history and role in developing the Indian Territory frontier, including the Indian Removals, Mexican-American War, and the Civil War, and the Indian Wars period. 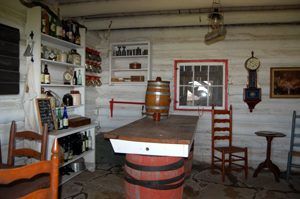