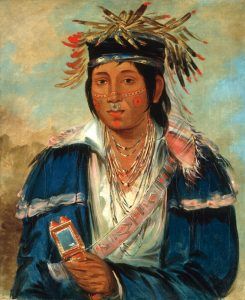 The Peoria are an Algonquian people whose ancestors came from Illinois, Michigan, Missouri, and Ohio.

Their history goes back as far as what was once part of the Cahokia culture of Moundbuilders. The name “Peoria” comes from their name for themselves in the Illinois language, Peewaareewa, meaning “Comes carrying a pack on his back.

The Peoria were among the many Illinois tribes encountered by the explorers, Father Jacques Marquette and Louis Jolliet. Later, French Jesuit missionaries converted tribal members to Roman Catholicism.

By the mid-1700s, they began to migrate into Missouri Territory.  In 1818, the Treaty of Edwardsville forced them to cede their lands in Illinois and the Treaty of Lewisville, in 1832, ceded their Missouri lands in exchange for land in Kansas, near the Osage River.

Disease and war drastically reduced the tribe’s numbers, so the Kaskaskia, Peoria, Piankashaw, and Wea tribes formed a confederacy under the Peoria name in 1854. After the Civil War, most confederated tribes signed the 1867 Omnibus Treaty, which purchased land from the Quapaw tribe and relocated the majority of the tribe from Kansas to Indian Territory (Oklahoma). The lands of the Confederation members in the Indian Territory were subject to the General Allotment Act of 1887. The allotment of all the tribal land was made by 1893, and by 1915, the tribe had no tribal lands or lands in restricted status.

During the 1950s, the US government pursued a policy of Indian termination to end its special relationship with tribes. It dissolved the Peoria tribal government, which lost federal recognition in 1959. Tribal members objected and began the process to regain federal recognition, which they achieved in 1978 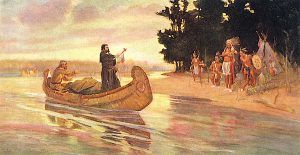 Today, the federally recognized tribe is based in Miami, Oklahoma, and has more than 2800 tribal members.