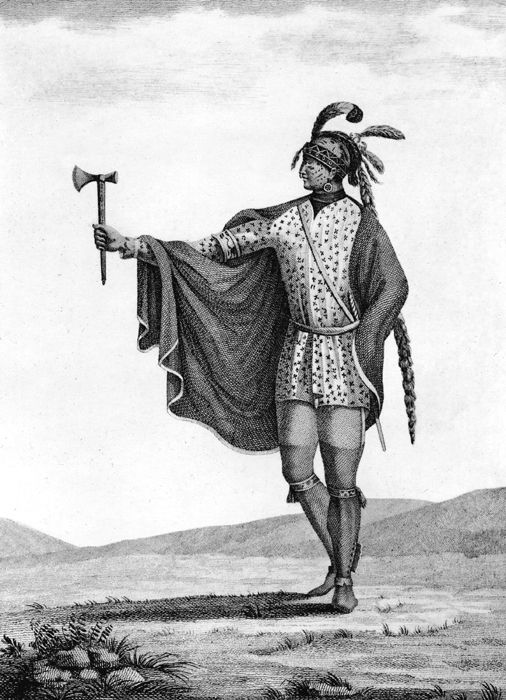 The Kaskaskia were one of several tribes that made up the Illiniwek Confederation. The name in their language translates to “he scrapes it off by means of a tool.” Their first contact with Europeans reportedly occurred near present-day Green Bay, Wisconsin in 1667 at a French Jesuit mission station. In 1673, Jesuit Father Jacques Marquette and French-Canadian explorer Louis Jolliet met the Kaskaskia at the Grand Village of the Illinois near present-day Utica, Illinois. Today it is a state historic site.

In 1703, the French established a permanent mission and settlement at Kaskaskia, a part of their New France colonization of North America. French settlers moved in to farm and to exploit the lead mines on the Missouri side of the Mississippi River. From its beginning, Kaskaskia was a French/Native American settlement, consisting of a few French men and numerous Kaskaskia and other Illinois Indians. Kaskaskia became the capital of Upper Louisiana in the early 18th century and by 1707, its population was estimated at 2,200, the majority of which were Illinois Indians. A visitor, writing of Kaskaskia in about 1715, said that the village consisted of 400 Illinois men, “very good people,” two Jesuit missionaries, and “about twenty French voyageurs who have settled there and married Indian women.” Many of the male descendants of Kaskaskia grew up to become voyageurs who would explore and exploit the Missouri River country.

The first Fort de Chartres was built in 1720 but within five years, flooding from the Mississippi River had left the original fort in bad condition and a new fort was built further from the river. 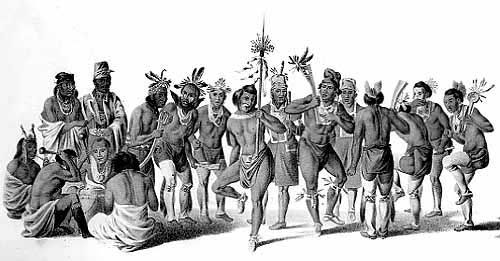 For years the French Jesuits built missions and ministered to Kaskaskia until the French and Indian War ended in 1763. By that time, the Kaskaskia and other Illiniwek tribes were quickly declining. The original population of the Illinois Confederation was estimated by early French explorers from 6,000 to more than 20,000. But, by 1764, their numbers had been reduced to some 600, and by 1778 to just a little more than 200. Their decline is blamed on making war with their French allies against other Indian tribes and new infectious diseases, to which they had no immunity.

In 1769, a Peoria warrior killed Ottawa Chief Pontiac, bringing down the wrath of the Great Lakes tribes upon the Kaskaskia and other Illinois tribes. Soon the Ottawa, Sac and Fox, Miami, Kickapoo, and Potawatomi tribes began to occupy their old tribal range along the Illinois River. What was left of the tribe joined with the Wea, Peoria, and Piankashaw tribes.

In 1795 the Kaskaskia first entered into treaty relations with the United States, and in 1832, together with the Peoria, they ceded all of their remaining territory in Illinois and were assigned to a reservation in northeastern Oklahoma, where they still reside along with remnants of the Wea and Piankishaw of Indiana. There are no full-blooded Kaskaskia left today.