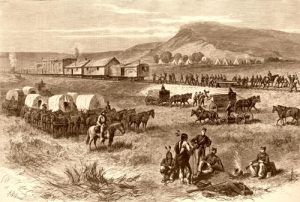 Grading was commenced in July, 1864, and track-laying the spring of 1865. The start was not auspicious, the line was originally located directly west from Omaha, but after one hundred thousand dollars had been spent, it was abandoned on account of the hills and consequent heavy grades, and two new lines were surveyed, one to the north and then west and the other south nearly to Bellevue, Kan., and then west. This latter was called the “Ox-bow Route” and was finally selected by the Company, notwithstanding violent opposition on the part of the people of Omaha, who feared that the Company would cross the Missouri at Bellevue, thus leaving Omaha out.

September 25th, 1865, saw eleven miles finished, and in November an excursion was run from Omaha to the end of the track, fifteen miles.

This was gotten up by Vice-President Durant, who took an engine and flat car, inviting about twenty gentlemen to go with him on the first inspection trip to Sailing’s Grove. Among the excursionists was General Sherman who gloried in the undertaking and expressed regret that at his age he could hardly anticipate living until the completion of the work. The party was very enthusiastic, and as the narrator naively puts it “as the commissary was well supplied, the gentlemen enjoyed themselves.”

For a number of reasons the work dragged. It took one year to complete the first forty miles. The lack of rail connections east of Omaha were, previous to January, 1867, when the Chicago and Northwestern Railroad reached Council Bluffs, a very serious occasion of expense and delay. The work was new, those in charge were not at that time experienced, funds were scarce, and the credit of the Company not yet established, and as a result the average rate of progress during the first twelve months was but a mile a week.

“The work was military in character and one is not surprised to find among the superintendents and others in charge, a liberal sprinkling of military titles. Surveying parties were always accompanied by a detachment of soldiers as a protection against Indians. The construction trains were amply supplied with rifles and other arms and it was boasted that a gang of track-layers could be transmuted into a battalion of infantry at any moment. Over half of the men had shouldered muskets in many a battle.”

The same facts are brought out by the following extract from a newspaper of that day.

“The whole organization of the road is semi-military. The men who go ahead (surveyors and locators) are the advance guard, following them is the second line (the graders) cutting through the gorges, grading the road and building the bridges. Then comes the main body of the army, placing the ties, laying the track, spiking down the rails, perfecting the alignment, ballasting and dressing up and completing the road for immediate use. Along the line of the completed road are construction trains pushing ‘to the front’ with supplies. The advance limit of the rails is occupied by a train of long box-cars with bunks built within them, in which the men sleep at night and take their meals. Close behind this train come train loads of ties, rails, spikes, etc., which are thrown off to the side. A light car drawn by a single horse gallops up, is loaded with this material and then is off again to the front. Two men grasp the forward end of the rail and start ahead with it, the rest of the gang taking hold two by two, until it is clear of the car. At the word of command it is dropped into place, right side up, during which a similar operation has been going on with the rail for the other side, — thirty seconds to the rail for each gang, four rails to the minute. As soon as a car is unloaded, it is tipped over to permit another to pass it to the front and then it is righted again and hustled back for another load.

“Close behind the track-layers comes the gaugers, then the spikers and bolters. Three strokes to the spike, ten spikes to the rail, four hundred rails to the mile. Quick work you say, — but the fellows on the Union Pacific are tremendously in earnest.” 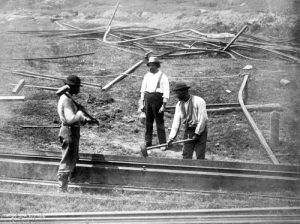 Or as another writer has it, “We witnessed here the fabulous speed with which the line was built. Through the two or three hundred miles beyond were scattered ten to fifteen thousand men (?) in great gangs preparing the road-bed with plows, scrapers, shovels, picks, and carts, and among the rocks, with drills and powder were doing the grading as rapidly as men could stand and move with their tools. Long trains brought up to the end of the track, loads of ties and rails the former were transferred to teams and sent one or two miles ahead and put in place on the grade, then spikes and rails were reloaded on platform cars and pushed up to the last previously laid rail and with an automatic movement and celerity that was wonderful, practiced hands dropped the fresh rails one after another on the ties exactly in line.

Hugh sledges sent the spikes home, — the car rolled on and the operation was repeated; while every few minutes the long heavy train behind sent out a puff of smoke from its locomotive and caught up with its load of material the advancing work. The only limit to the rapidity with which the track could thus be laid was the power of the road behind to bring forward material.”

The above description applies to the later period of construction, when the forces had become thoroughly organized and the work systematized. The following table shows the rate of construction: