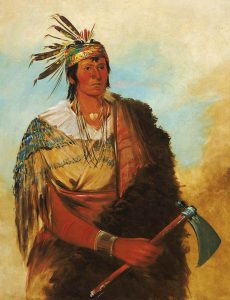 The Wea people were a sub-tribe of the Miami Indians. The name Wea is a shortened version of the many recorded names, such Wawaagtenang, “place of the round, or curved, channel,” or Waayaahtanonki, “place of the whirlpool,” and others indicating where they were first seen by the Europeans.

They were first mentioned in Jesuit relations in 1673 as living in eastern Wisconsin. However, they were later said to have occupied land in Indiana. They also had villages in Illinois and Ohio. In 1757, the Wea had aligned themselves with the Piankashaw and were trying to come into friendly relations with the whites. Subsequently, various agreements of peace with other tribes and the whites were entered into, which in 1854 lead to a treaty that confederated the Wea with the Kaskaskia, Peoria, and Piankashaw tribes.

They were then moved to Kansas before again being forced to move to Oklahoma, becoming the Peoria Tribe of Oklahoma. However, not all of the Wea people moved with the rest, remaining in Indiana. Today, the Wea Tribe of Indiana is a state-recognized tribe located in Clinton, Indiana.