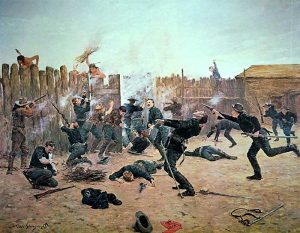 At the close of the Civil War, several regiments were ordered to the western frontier to protect the pioneers from Indian raids. Several temporary posts were built in Kansas, including what was first known as Camp Wynkoop in September 1865. Built by companies of the 48th Wisconsin Infantry under the command of Captain Adolph Whitman, the post was located at the head of Spring Creek about two ½ miles north of the Arkansas River, about midway between the present towns of Kendall and Syracuse. Because the site was initially recommended by Francis Xavier Aubry, a trader and explorer who was killed in Santa Fe, New Mexico in August 1854, the fort was later renamed in his honor.

Intended as a temporary post, the fort protected travelers on the Mountain Branch of the Santa Fe Trail and the Aubrey Cutoff for only nine months. Though no major battles occurred at the fort during this period, the troops did engage in many small skirmishes with the Indians while out on patrol in the area and while escorting wagon trains along the Santa Fe Trail. It was abandoned in April 1866. Afterward, the site was utilized as a stage station until 1867, when it became part of a private ranch. It has continued to be used for agricultural purposes since then, and today the remains of the fort consist only of three clusters of dugout depressions. The fort was located three miles east of Syracuse, Kansas, on U.S. Highway 50, then 1/2 mile south on a rural road, ½  mile east on a rural road, and very near a farmstead on the south side of the road.