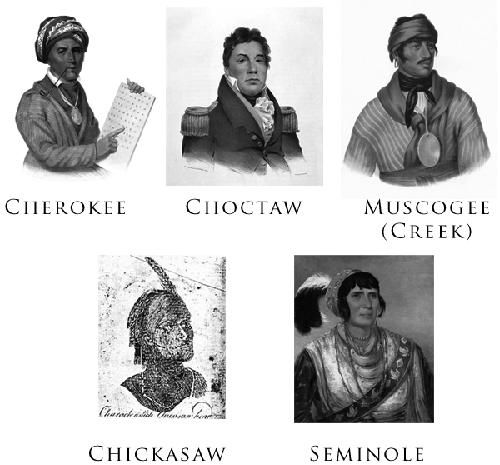 “How different would be the sensation of a philosophic mind to reflect that instead of exterminating a part of the human race by our modes of population, that we had persevered through all difficulties and at last had imparted our Knowledge of cultivating and the arts, to the Aboriginals of the Country by which, the source of future life and happiness had been preserved and extended. But it has been conceived to be impracticable to civilize the Indians of North America. This opinion is probably more convenient than just.” — Henry Knox – Notes to George Washington

The Five Civilized Tribes were a group of Native American nations that were officially and unofficially called such to collectively designate the Cherokee, Chickasaw, Choctaw, Creek, and Seminole tribes. The term was applied by Anglo-European settlers during the colonial and early federal period because these tribes had adopted many of the colonists’ customs and generally, had good relations with the white settlers.

The term appears in the reports of the Indian Office as early as 1876, when the agent reported that “each tribe had a constitutional government, with legislative, judicial, and executive departments, conducted upon the same plan as our State governments, the entire expenses of which, are paid out of their own funds.” However, at that time there was no court with jurisdiction to try cases where an Indian was one party and a citizen of the United States or a corporation was the other.

These five tribes differed from most others in the fact that their lands were held not on the same basis as reservations, but, by patents or deeds, with certain restrictions as to alienation and reversion, as well as other restrictions regarding timber, mining and grazing within their respective tracts.

All of the Five Civilized Tribes lived in the Southeastern United States before the government forced their relocation under the Indian Removal Act to other parts of the country, especially the future state of Oklahoma. This act, signed into law by President Andrew Jackson in May 1830, required that all Native American tribes living east of the Mississippi River relocate to lands west of the river.

Over the next several decades the Five Civilized Tribes were relocated from their homes to Indian Territory (Oklahoma) during a series of removals, authorized by federal legislation.

When the Civil War began in 1861, the Five Tribes were divided in politics, with the Choctaw and Chickasaw fighting on the Confederate side, the Creek and Seminole supporting the Union, and the Cherokee fighting a civil war within their own nation between the majority Confederates and the minority pro-Union men. 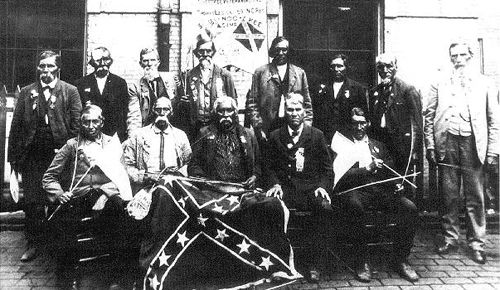 Though the number of slaveholders was small, members of each tribe held black slaves. There were also free African Americans who lived with them, especially the Seminole. Many of these became known as Black Indians. Following the Civil War, the Federal government’s peace treaties with the tribes required the emancipation of slaves and guarantees of citizenship in each nation. These former slaves became known as tribal Freedmen, such as Cherokee Freedmen. However, determining the status of the freedmen within the tribes became a difficult one, even though, in the treaties of 1866, it was agreed that they should be subject to the same laws as the Indians and be entitled to a portion of the land and rights in differing in the different tribes.

The Chickasaw, for example, refused to automatically make their Freedmen citizens, instead requiring them to go through the same process as anyone else to gain citizenship. These requirements provided that citizens be born of a Chickasaw parent or to petition for citizenship if they were not a known blood Chickasaw. Due to their refusal to automatically make the former slaves citizens of their nation, the U.S. Government penalized the tribe by taking over half of their lands without compensation. 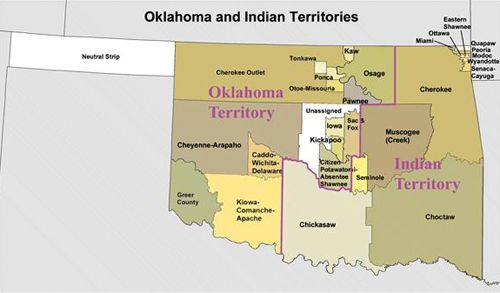 There were other issues within the tribes, such as school privileges, where in some tribes, the Freedmen had separate schools and were restricted from receiving other privileges.

Though the United States government promised that all of the lands of the Five Civilized Tribes would be free of white settlement, this was not the case as thousands violated the policy.

In May 1890, the lands of the five tribes were abolished, providing each member with an allotment of acreage and in 1893, the government opened the remaining land to outside settlement.

In 1907, the Oklahoma Territory and the Indian Territory were merged to form the state of Oklahoma. All five of the nations of the Five Civilized Tribes continue to have a major presence there today.