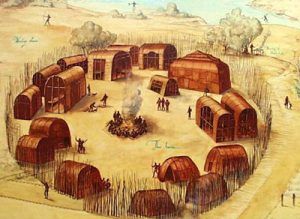 Opechancanough, a Powhatan chief and brother of Chief Powhatan is thought to have been born in about 1552. His name meant “He whose Soul is White” in the Algonquian language. Upon his brother’s death in 1618 took control of the Powhatan Confederacy. When the English settlement of Jamestown, Virginia was established in 1607, Opechancanough was known as a much-feared warrior and headed a band of Powhatan who lived along the Pamunkey River near the present-day town of West Point, Virginia.

Known to be strongly opposed to the European settlers, he captured John Smith of Jamestown and brought him before Chief Powhatan, where Pocahontas was said to have intervened and saved Smith’s life. Sometime after his release, Smith, in order to change the temper of the Indians, who jeered at the starving Englishmen and refused to sell them food, went with a band of his men to Opechancanough’s camp under pretense of buying corn, seized the chief by the hair, and at the point of a pistol marched him off a prisoner. 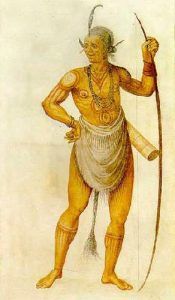 His band soon brought boat-loads of provisions to ransom their chief, who thereafter entertained more respect and deeper hatred for the English. While Chief Powhatan lived Opechancanough was held in restraint, but after his brother’s death in 1618 he became the dominant leader of the nation, although his other brother, Opitchapan, was the nominal head-chief.

He plotted the destruction of the colony so secretly that only one Indian, the Christian Chanco, revealed the conspiracy, but too late to save the people of Jamestown, who at a sudden signal were massacred, on March 22, 1622, by the natives who had earlier deemed to be friendly. In the period of intermittent hostilities that followed, duplicity and treachery marked the actions of both whites and Indians. In the last year of his life, Opechancanough, taking advantage of the dissensions of the English, planned their extermination. In the spring of 1644, Opechancanough led one last uprising, killing some 300-500 colonists. This time, however, he was captured. While imprisoned at Jamestown, he was shot by a guard and later, died of his wounds.