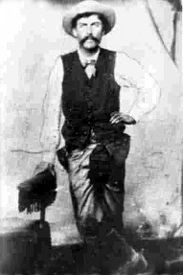 Fredrick Tecumseh “Fred” Waite, a Chickasaw Indian, was a short-time member of Billy the Kid’s Gang and gunfighter for the Regulators during the Lincoln County War. Later, however, he would serve as a lawman and prominent politician.

Fred Waite was born in the Chickasaw Nation at Fort Arbuckle, Oklahoma, on September 28, 1853, to Thomas and Catherine McClure Waite. Thomas farmed and operated a trading store and stage stand southeast of present Pauls Valley.

During the Civil War, he and his family were forced to take refuge in the Sac and Fox Reserve in eastern Kansas after being chased by Confederate soldiers attempting to stop the family’s departure. Later, the family returned to Oklahoma, and Fred became a cowboy.

In 1875 he decided to make his way to Colorado but he instead wound up in New Mexico, where he found work with cattle baron John Chisum, who had a large ranch south of present-day Roswell. However, by the fall of 1877, he was working for Chisum’s friend and fellow cattle baron, John Tunstall, near Lincoln, New Mexico. Tunstall was an ambitious young Englishman who planned on building an empire using the Desert Land Act. He planned to claim homestead rights to as many of the best water sources as possible, thereby controlling all the surrounding grazing land.

In 1877, Tunstall and a man named Alexander McSween had the nerve to establish a rival business that competed with the powerful Murphy & Dolan Mercantile and Banking Company. Murphy & Dolan’s business had long monopolized the county’s trade, controlling pricing, making immense profits on their goods, and virtually having a hand in nearly every part of the large county economy. The merchants and their allies, which included local law enforcement, were extremely disliked for obvious reasons.

In January 1878, Billy the Kid also went to work for John Tunstall and became friends with Fred Waite. That February, Murphy & Dolan obtained a court order to seize some of Tunstall’s horses as payment for an outstanding debt. When Tunstall refused to surrender the horses, Lincoln County Sheriff, William Brady, formed a posse led by deputy William Morton to seize them. After protesting the presence of the posse on his land, Tunstall was shot in the head. This incident started what became known as the Lincoln County War.

The next day, Billy the Kid, and Tunstall’s foreman, Dick Brewer, went to the Justice of the Peace of Lincoln, John Wilson, who swore out affidavits and warrants for the posse that had killed John Tunstall. Wilson ordered the town constable, Atanacio Martinez, to serve the warrants. Not enthused about confronting Murphy & Dolan, Constable Martinez deputized Billy the Kid and Fred Waite to go with him. When they arrived at the Murphy & Dolan Mercantile, they found it guarded by troops from Fort Stanton and Lincoln County Sheriff William Brady.

Backed by the soldiers and his own heavily armed party, Brady not only refused to let Martinez make any arrests; but disarmed the three men and marched them to the jail. Martinez was let go, but Billy the Kid and Waite remained in jail until February 23, missing Tunstall’s funeral. On March 1, Justice of the Peace John Wilson appointed Dick Brewer as town constable and deputized several others, including Billy the Kid. Once again, the group, who called themselves, the Regulators, were sent to bring in Tunstall’s murderers.

On April 1, 1878, Billy, and several other Regulators, including Frank MacNab, Jim French, Fred Waite, Henry Newton Brown, and John Middleton, were involved in a shootout with law enforcement in front of the Lincoln County Courthouse. When the dust cleared, William Brady and his deputy, George W. Hindman, lay dead.

Fred and other Regulators participated in several skirmishes and at least two gun battles. During this time, he was being paid as a gunfighter, which was $4.00 a day, at a time when most cowboys earned only a dollar a day. The money was being paid by Alexander McSween, John Tunstall’s business partner. By this time, Waite was the subject of a county and two Federal murder warrants and officially an outlaw.

On July 19, 1878, McSween and his supporters, including Billy the Kid and Fred Waite, were besieged by the new Sheriff, George Peppin, and a group of his men. McSween’s house was set on fire, and several people were shot dead as they came out of the house, including an unarmed Alexander McSween. This action signaled an end to the Regulators, for, without support, they could not continue. However, the “war” continued on a small scale until September 1878, when President Rutherford B. Hayes removed New Mexico’s corrupt Governor Axtell from office and appointed Lew Wallace as the state’s new governor.

By the fall of 1878, Billy the Kid, along with Tom O’Follliard, Henry Newton Brown, Fred Waite, and John Middleton began to follow the trail of John Chisum’s horses, which were being sent to graze in the Canadian Valley of the Texas Panhandle. The gang then stole approximately 125 horses which they sold in and around Tascosa, Texas. For the next several months, they spent the money they made from selling the horses freely, eating, drinking, and racing horses in Tascosa. However, by the winter of 1878-79, they had squandered the money.

Fred tried, unsuccessfully, to get Billy the Kid to come to Oklahoma with him, but Billy refused. Along with Tom O’Follliard, he returned to New Mexico, where they hooked up with old pal Charlie Bowdre and another desperado named Dave Rudabaugh and continued their rustling operation.

Fred returned to Pauls Valley, Oklahoma, where he married and started a family while he worked at ranching and tried his hand as a newspaper editor. He also got involved in tribal politics and served as an Indian Policeman.