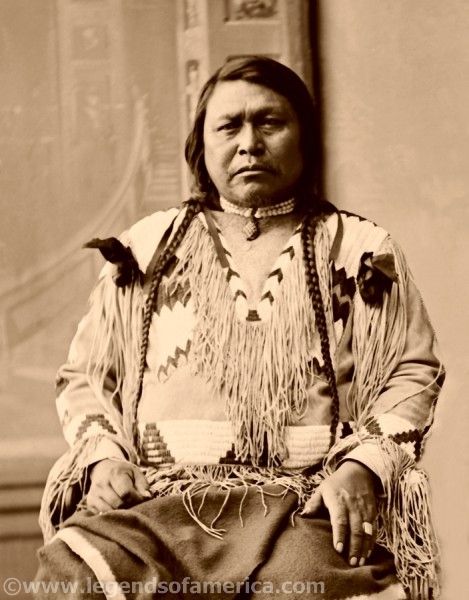 “We do not want to sell a foot of our land that is the opinion of our people. The whites can go and take the land and come out again. We do not want them to build houses here.” — Ouray

Chief Ouray was the leader of the Tabeguache (Uncompahgre ) band of the Ute tribe in western Colorado in the 19th century. Ouray was born near Taos, New Mexico in about 1833.

According to oral history passed down by Ute elders, he was born on a gloriously clear night when a magnificent display of meteor showers streaked across the black winter sky. The elders believed it was a sign; a message from above of good things to happen.

Ouray’s mother was a member of the Uncompahgre band of Ute and his father, Guera Murah, was half Jicarilla Apache. Ouray grew up in the Taos area where Spanish and English were the prevalent languages and would not learn to speak the Ute and Apache languages until later in life. He spent most of his youth working for Mexican sheepherders and fighting against rival Sioux and Kiowa.

When he was about 18 Ouray traveled into Colorado, and became a member of the Tabeguache Ute band, where his father, despite his Apache heritage, had become the leader. In 1859, he married a Tabeguache Ute maiden by the name of Chipeta, who was actually a Kiowa Apache who had been adopted by the Ute as a child. 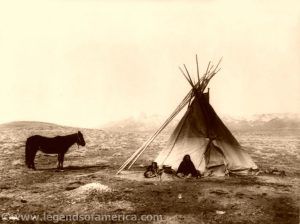 When his father died in 1860, Ouray became chief of the Ute Indians, including the Uncompahgre band. In Ouray’s role as chief, he was considered one of the Utes’ greatest leaders with strong characteristics of patience and diplomacy. He was often referred to as “The White Man’s Friend,” as he sought to work with the white settlers and the government.

In October 1863, Ouray negotiated a treaty in which the Tabeguache Ute were assigned a reservation, but, unfortunately for the Ute, the vast majority of their lands east of the Continental United States, ended up in government hands. In 1868, he traveled to Washington, D.C. to represent his people and was appointed “head chief of the Ute” by the government. A new treaty created reservation lands in Colorado for the Tabeguache, Moache, Capote, Wiminuche, Yampa, Grand River, and Uinta, but again, more land was relinquished.

Though Ouray always tried to secure the best possible conditions for his people while still remaining friendly to the whites, each subsequent treaty brought increasing losses of land for the Ute. For many of the Ute, building resentments began to form and a number of attempts were made on Ouray’s life. However, he survived and maintained his conciliatory attitude.

With the discovery of gold in Colorado, conditions for the Ute changed dramatically as miners flocked upon their lands. As a result, relations between the Indians and the whites deteriorated. In the spring of 1878, Nathan Meeker assumed the role of Indian Agent at the White River Agency. “Dictatorial” in his brand of management, Meeker undiplomatically tried to force the Ute to farm, raise stock, discontinue their pony racing and hunting forays, and send their children to school. Meeker, determined to convert the Ute from primitive savages to hard-working, God-fearing farmers, persisted in forcing his reforms, even when warned that he was making the Ute furious. But Meeker ignored the warnings and ordered that a horse racing track be plowed under to convert to farmland. He also suggested to one that there were too many horses and that they would have to kill some of them. The Ute, whose land Meeker was plowing under, resisted and a fist-fight occurred.

As a result, Meeker wired for military assistance, claiming that he had been assaulted by the Ute man, driven from his home, and severely injured. The government responded by sending 200 troops led by Major T.T. Thornburgh. 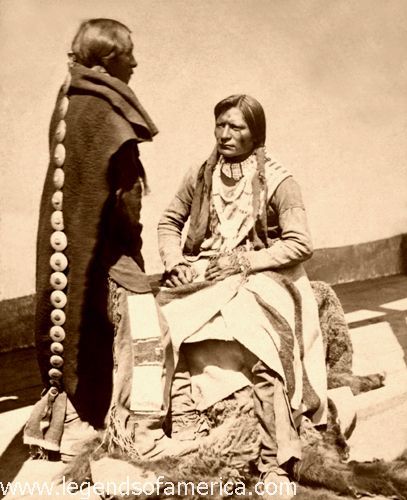 However, perceiving this action as an “act of war,” the Utes revolted. On September 29, 1879, before the troops arrived, the Indians attacked the agency, burned the buildings, and killed Meeker and nine of his employees. The incident is known as the Meeker Massacre. Meeker’s wife, daughter, and another girl were held as captives for 23 days. After the massacre, relief columns from Forts Fred Steele and D. A. Russell, Wyoming, defeated the Utes in the Battle of Milk Creek, Colorado, and ended the uprising.

Though Ouray had sent orders to the Ute band involved in the attacks to stop, his orders were ignored. Afterward, he did his best to keep the peace but it was too late. Area settlers demanded the Ute’ removal. One headline in the October 30, 1879 issue of Harpers Weekly screamed: “The Utes Must Go.”

Ouray found himself explaining to his people why they must leave their land. On March 6, 1880, the Southern Ute and the Uncompahgre acknowledged an agreement to settle respectively on La Plata River and on the Grand near the mouth of the Gunnison, while the White River Ute agreed to move to the Uinta reservation in Utah.

In the summer of 1880, Ouray and his wife, Chipeta, journeyed to the Southern Ute agency at Ignacio with the intent to negotiate once again with the white man. Though Ouray completed the journey, he was a sick man by the time he arrived. He died of Brights Disease on August 24, 1880.

He was buried secretly at Ignacio. Chief Ouray’s obituary in The Denver Tribune read:

“In the death of Ouray, one of the historical characters passes away. He has figured for many years as the greatest Indian of his time, and during his life has figured quite prominently. Ouray is in many respects…a remarkable Indian…pure instincts and keen perception. A friend to the white man and protector to the Indians alike.” 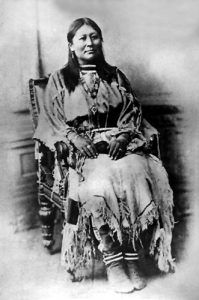 Forty-five years later, Ouray was re-interred in the cemetery southeast of the White River Agency and the grave was appropriately marked.

His wife, Chipeta, continued to work for the Ute. When sufficient agricultural land was not found for the Uncompahgre in southern Colorado, a new reservation was established in 1882. Chipeta then relocated to the reservation in northeast Utah, where she was highly valued and always sat in on the chief’s meetings. She passed away in 1924.

The city of Ouray, Colorado was named for him.