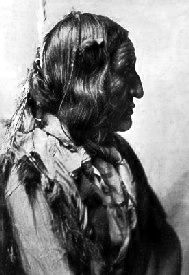 If any people ever fought for liberty and justice, it was the Cheyenne. If any ever demonstrated their physical and moral courage beyond cavil, it was this race of purely American heroes, among whom Little Wolf was a leader.

I knew the chief personally very well. As a young doctor, I was sent to the Pine Ridge agency in 1890, as a government physician to the Sioux and the Northern Cheyenne. While I heard from his own lips of that gallant dash of his people from their southern exile to their northern home, I prefer that Americans should read of it in Doctor George Bird Grinnell’s book, “The Fighting Cheyennes.” No account could be clearer or simpler; and then too, the author cannot be charged with a bias in favor of his own race.

At the time that I knew him, Little Wolf was a handsome man, with the native dignity and gentleness, musical voice, and pleasant address of so many brave leaders of his people. One day when he was dining with us at our home on the reservation, I asked him, as I had a habit of doing, for some reminiscences of his early life.  He was rather reluctant to speak, but a friend who was present contributed the following:

Perhaps I can tell you why it is that he has been a lucky man all his life. When quite a small boy, the tribe was one winter in want of food, and his good mother had saved a small piece of buffalo meat, which she solemnly brought forth and placed before him with the remark: “My son must be patient, for when he grows up he will know even harder times than this.”

“He had eaten nothing all day and was pretty hungry, but before he could lay hands on the meat a starving dog snatched it and bolted from the teepee. The mother ran after the dog and brought him back for punishment. She tied him to a post and was about to whip him when the boy interfered. “Don’t hurt him, mother!” he cried; “he took the meat because he was hungrier than I am!'”

I was told of another kind act of his under trying circumstances. While still a youth, he was caught out with a party of buffalo hunters in a blinding blizzard. They were compelled to lie down side by side in the snowdrifts, and it was a day and a night before they could get out. The weather turned very cold, and when the men arose they were in danger of freezing. Little Wolf pressed his fine buffalo robe upon an old man who was shaking with a chill and himself took the other’s thin blanket.

As a full-grown young man, he was attracted by a maiden of his tribe, and according to the custom then in vogue, the pair disappeared. When they returned to the camp as man and wife, behold! there was great excitement over the affair. It seemed that a certain chief had given many presents and paid unmistakable court to the maid with the intention of marrying her, and her parents had accepted the presents, which meant consent so far as they were concerned. But the girl herself had not given consent.

The resentment of the disappointed suitor was great. It was reported in the village that he had openly declared that the young man who defied and insulted him must expect to be punished. As soon as Little Wolf heard of the threats, he told his father and friends that he had done only what it is every man’s privilege to do.

“Tell the chief,” said he, “to come out with any weapon he pleases, and I will meet him within the circle of lodges. He shall either do this or eat his words. The woman is not his. Her people accepted his gifts against her wishes. Her heart is mine.” The chief apologized, and thus avoided the inevitable duel, which would have been a fight to the death.

The early life of Little Wolf offered many examples of the dashing bravery characteristic of the Cheyenne and inspired the younger men to win laurels for themselves. He was still a young man, perhaps thirty-five when the most trying crisis in the history of his people came upon them. As I know and as Doctor Grinnell’s book amply corroborates, he was the general who largely guided and defended them in that tragic flight from the Indian Territory to their northern home. I will not discuss the justice of their cause: I prefer to quote Doctor Grinnell, lest it appears that I am in any way exaggerating the facts.

“They had come,” he writes, “from the high, dry country of Montana and North Dakota to the hot and humid Indian Territory. They had come from a country where buffalo and other game were still plentiful to a land where the game had been exterminated.  Immediately on their arrival they were attacked by fever and ague, a disease wholly new to them. Food was scanty, and they began to starve. The agent testified before a committee of the Senate that he never received supplies to subsist the Indians for more than nine months in each year. These people were meat-eaters, but the beef furnished them by the government inspectors was no more than skin and bone. The agent in describing their sufferings said: ‘They have lived and that is about all.”

“The Indians endured this for about a year, and then their patience gave out. They left the agency to which they had been sent and started north. Though troops were camped close to them, they attempted no concealment of their purpose. Instead, they openly announced that they intended to return to their own country. 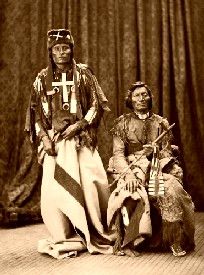 We have heard much in past years of the march of the Nez Perce under Chief Joseph, but little is remembered of the Dull Knife outbreak and the march to the north led by Little Wolf. The story of the journey has not been told, but in the traditions of the old army this campaign was notable, and old men who were stationed on the plains forty years ago are apt to tell you, if you ask them, that there never was such another journey since the Greeks marched to the sea.

“The fugitives pressed constantly northward undaunted, while orders were flying over the wires, and special trains were carrying men and horses to cut them off at all probable points on the different railway lines they must cross. Of the three hundred Indians, sixty or seventy were fighting men — the rest old men, women, and children. An army officer once told me that thirteen thousand troops were hurrying over the country to capture or kill these few poor people who had left the fever-stricken South, and in the face of every obstacle were steadily marching northward.

“The War Department set all its resources in operation against them, yet they kept on. If troops attacked them, they stopped and fought until they had driven off the soldiers, and then started north again. Sometimes they did not even stop, but marched along, fighting as they marched. For the most part they tried — and with success — to avoid conflicts, and had but four real hard fights, in which they lost half a dozen men killed and about as many wounded.”