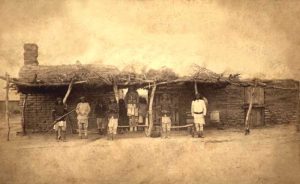 Nah-deiz-az, aka: “Carlisle Kid” was a so-called Apache “outlaw,” who is often confused with the “Apache Kid.”

Nahdeizaz was born along the Verde River in Arizona in 1865. When he was ten years old, he and his family were forced onto the San Carlos Reservation in southeastern Arizona in 1875. Nahdeizaz, along with many other Apache children was sent to the Carlisle Indian School in Pennsylvania, where 50 of them died. There, he picked up the nickname, “Carlisle Kid.”

Afterward, he returned to the Arizona reservation and adapted to farming. However, in the early part of 1887, he got into a dispute with Second Lieutenant Seward Mott who oversaw the farming operations. The dispute festered and grew to a point that on March 10, 1887, he shot and killed the lieutenant whom he believed was trying to push him off of his land. Nahdeizaz surrendered and was tried and was sentenced to life in prison. He was first taken to the Yuma Penitentiary and later transferred to the federal penitentiary at Menard, Illinois. However, due to jurisdictional issues, he was returned to Arizona, where he was tried again in October 1889, and this time he was sentenced to hang. After his execution on December 27, 1889, he was buried in the Globe, Arizona cemetery beside two white outlaws who had been lynched some years previously.