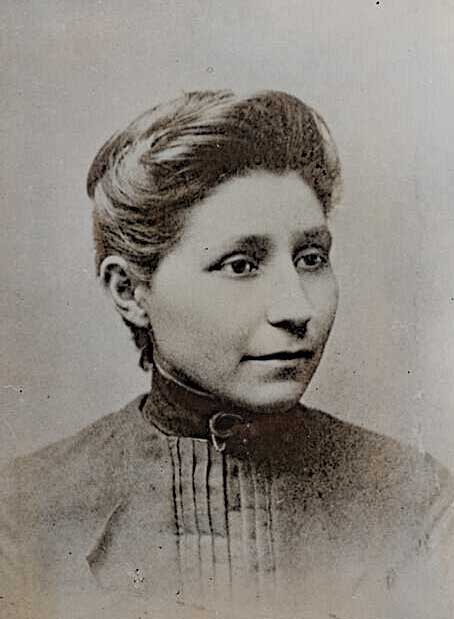 Born June 17, 1865, Susan La Flesche would become the first Native American in the United States to receive a medical degree as a doctor. The youngest of four daughters, Susan’s father was Omaha tribe Chief Joseph La Flesche, a.k.a. Iron Eye. Chief La Flesche and his wife Waoo-Winchatcha, a.k.a. Mary Gale, were of mixed race who raised their children to assimilate to both Native and white cultures.

Susan began her education early at a mission school on the reservation. Native children were taught the culture and habits of whites there. This assimilation, supported by Susan’s parents, wasn’t new to the Omaha tribe. The previous leader, Chief Big Elk had been warning since the late 1830’s that they must adapt to the white’s world. Before his death, he appointed Chief La Flesche to continue his message. Susan’s father had been educated in St. Louis and adopted by Big Elk upon his return to the Nebraska reservation. Susan’s parents taught her the tribe’s Native traditions and heritage but kept her from receiving an Omaha tribal name and from any tribal markings. 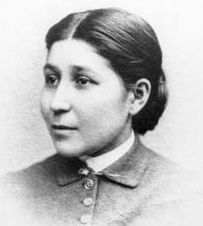 During her time at the reservation, Susan would experience poor living conditions. At one point, she watched another Native woman die after a white doctor refused her care. Experiences like this would guide La Flesche to her calling in the medical field. She attended the Elizabeth Institute in New Jersey for two years, returning to the reservation in 1882 where she taught at the agency school. Then in 1884, she returned to higher education at the Hampton Institute in Virginia for two more years. During her time there, she was encouraged to apply for a scholarship from the U.S. Office of Indian Affairs.

While other female graduates were encouraged to return to their reservations to become Christian wives, Susan took her scholarship to the Woman’s Medical College of Pennsylvania.  It was one of the only medical schools on the East Coast to accept women as students in the late 1800’s. There she studied chemistry, pharmaceutical science, obstetrics, anatomy, and histology, along with general medicine.  Overcoming the stigma of women being in higher education, and the racism against her native heritage, La Flesche thrived at the Philadelphia school, becoming valedictorian and graduating at the top of her class on March 14, 1889.  She worked an internship for a year in Pennsylvania afterward.

Susan then accepted a position as the attending physician at the government boarding school back on her Omaha reservation. There she was responsible for teaching students about hygiene, and often cared for other community members outside the school. She also helped other tribal members write letters and translate official documents. She quickly became the preferred doctor on the reservation, leading her white counterpart to quit, making her the only doctor for over 1300 square miles.

She would spend several years making house calls, walking on foot in the harsh Nebraska weather, then later by horseback and buggy. Even with her education and determination to help the sick of the tribe, some rejected her diagnosis due to the tensions created by her father, which had split the Omaha to those who supported assimilation, and those who did not.  All the while, La Flesche was paid only $500 a year and forced to buy her own supplies when the Bureau of Indian Affairs ran out.  She received another $250 from the Women’s National Indian Association for her work as a medical missionary.

In 1893, Susan’s busy schedule of tending to the medical needs of the tribe took its toll, forcing her to be bed-ridden for two months after a fall from a horse. In 1894, she married South Dakota Sioux Henry Picotte and the couple moved to Bancroft, Nebraska. Here she would set up a private practice and the couple would have two boys, Caryl born in 1895, and Pierre in 1896. She bucked the trend of women staying at home to raise their children, and her medical practice in Bancroft served both white and native patients. 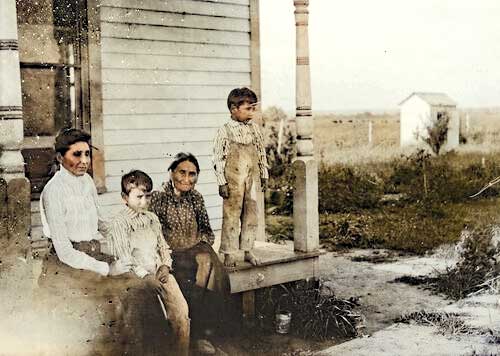 Dr. Susan LaFlesche Picotte with her mother and two sons at their Nebraska Home. Touch of color by Dave Alexander.

Her husband’s alcoholism, along with the prevailing alcohol abuse among her tribe, would lead to her involvement in the Temperance Movement. Henry died in 1905, and in 1906 Susan led a delegation to the nation’s capital to lobby for the prohibition of alcohol on Indian lands. She would become controversial though with her support of the Peyote Religion, a Native American religious movement that sought to introduce the drug peyote into their spiritual traditions.

After her husband’s death, she would also spend the next couple of years battling the Bureau of Indian Affairs to prove she was more competent than her brother-in-law to oversee her husband’s estate, which had left about 185 acres of land in South Dakota to their two sons.  Once the matter had been settled in her favor, Susan, acting for her sons, invested money from the estate and sale of the land into rental properties and used the income to help support her family. 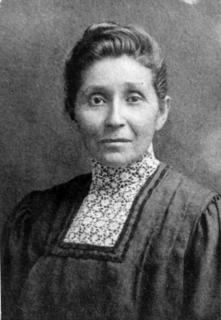 In 1910, Susan would travel back to Washington D.C., this time to present the argument to the Office of Indian Affairs that, while most of the Omaha tribesmen were competent to manage their own affairs, the Indian Office had stifled them from learning business skills and assimilation into the white culture, and thus some of the tribe could not protect themselves from fraud and continued to need the Federal Government as guardians.  This strategy was born from her opposition to the consolidation of the Omaha and Winnebago tribes.

Susan La Flesche Picotte would continue her work with the tribe and would see her dream of a reservation hospital become reality in 1913, with it being built in Walthill, Nebraska. However by this time, her health was frail and she would succumb to what is suspected as bone cancer on September 15, 1915. She is buried in the Bancroft Cemetery near her parents, sisters, and an older half-brother, Francis La Flesche, who became renowned as a Native American ethnologist, anthropologist, and musicologist who focused on Omaha and Osage culture.

Her son Caryl served in World War II, eventually winding up in Detroit, Michigan. Her other son Pierre would live in Walthill where he raised a family of three children. The hospital in Walthill was named “Dr. Susan La Flesche Picotte Memorial Hospital” and declared a National Historic Landmark in 1993.