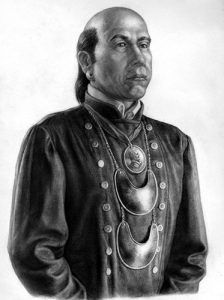 Along the Natchez Trace in Alabama is a place called Buzzard Roost. Situated on Chickasaw lands in the 19th century, a man named Levi Colbert built a “stand” or inn at the site of was called Buzzard Sleep. When Levi built the inn in 1801, he renamed it Buzzard Roost. Located near a spring, the site was a perfect spot to serve the many travelers along the Trace.

Levi Colbert was one of six sons of James Logan Colbert, a North Carolinian settler of Scots descent, and his second wife, Minta Hoye, a Chickasaw woman. Levi was born in Alabama in 1759, grew up bilingual, and was educated in both Chickasaw and European-American traditions. He was known to the Chickasaw as Itawamba and would become a leader and chief of the Chickasaw people. Though only one-half Chickasaw, chiefdom in the tribe passes matrilineally.

His brother, George Colbert, operated Colbert’s Stand and Ferry across the Tennessee River on the Natchez Trace, about five miles to the north of Buzzard Roost. Levi had an interest in the prosperous ferry, which at one time charged future U.S. President Andrew Jackson $75,000 to ferry his army across the river. Historians indicate that Jackson’s troops and their horses were fed by the Chickasaw tribe both coming and going due to the troops’ shortages of food, and that was the reason George Colbert charged the $75,000, a fact that resulted in descendants of General John Coffee to formally thank the Chickasaw National for 200 years later.* 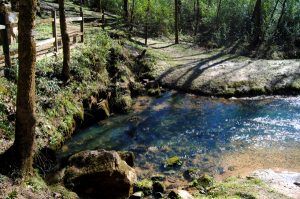 Though opposed to the Indian Removal Act of 1830, both Levi and George Colbert would become prominent interpreters and negotiators in the negotiations, hoping to keep the peace and gain the best deal for their people.

While a young man, Levi had earned the title of Itawamba Mingo, meaning “Bench Chief.” This occurred when Levi had learned that Creek Indians were going to attack the Chickasaw. Unfortunately, when he came by this information, it was fall, and many of the Chickasaw warriors were away hunting. Acting quickly, Levi began to gather as many young Chickasaw as he could and took the offensive with their approaching enemy. Though severely outnumbered, they caught the Creek by surprise and killed or wounded most of them. When the hunters returned and learned of Levi’s act of bravery, they awarded him a bench to sit upon in council. Before this, the custom was that all warriors sat on the ground. He was sometimes called by the Chickasaw “Okolona,” which means calm or peaceful, due to his quiet manner. To the white men, who also respected him as a leader, he received the nickname of “Levi the Incorruptible.” Travelers who stopped at the Buzzard Roost Inn remarked that it’s a good place for they were well received, well-fed, and kindly treated.

Levi married several wives during his lifetime, including Seletia Colbert, who lived with him at Buzzard Roost, another who lived at what is now known as the French Farm, not far from Okolona, in Monroe County; and a third named Minto-Ho-Yo, a full-blood Chickasaw. Levi and his wives had many children. One of his daughters with Minto-Ho-Yo, Phalishta ‘Pat’ Colbert, would marry a man named Kilpatrick Carter. An Irish man, Kilpatrick settled among the Chickasaw in about 1817 and was hired by Levi Colbert to build a new home at Buzzard Roost. Later, when Levi moved on, he would give the home to Carter and his daughter, Phalishta.

Levi’s father, James Logan Colbert, moved to Cotton Gin Port, Mississippi, in about 1819. Located on the east bank of the Tombigbee River, at a crossing of vital Indian trails, Cotton Gin Port was the first town established in northern Mississippi. As part of a “plan of civilization” for the Chickasaw Indians, the U.S. Government built a cotton gin here in 1801. The Gaines Trace road was built to the town in 1811, which ran from the head of Muscle Shoals on the Tennessee River in Alabama to Cotton Gin Port, where it crossed the Tombigbee River before making its way south to Fort Stoddert, Alabama.

Levi’s father, James, built a mill for Levi in the quickly growing town, and Levi soon joined him there. Over the years, Levi had become a prosperous man and soon built a new home that sat on the bluff west of the river. While living in Cotton Gin Port, he was said to have owned 4,000 cattle, 500 horses, a large herd of sheep, and several heads of swine.

The Colbert brothers signed several treaties as leaders of the Chickasaw, but, in the 1830s, they began to question the terms. Meetings continued between the leaders and the U.S. Government. Unfortunately, Levi became ill and was unable to attend all of the meetings. In 1834, he was on his way to Washington DC to discuss the Pontotoc Treaty. Stopping at his old home on Buzzard Roost to visit with his daughter and son-in-law, he fell ill once again. He died of pneumonia on June 2, 1834, years before his people finally agreed to a treaty and were removed to Indian Territory (Oklahoma). While some claim his grave is in the Oakwood Cemetery in Tuscumbia, Alabama, there is no record. According to one member of the Chickasaw Tribe, don’tdon’t want anyone to know the exact location to protect against treasure seekers*.

Itawamba County, Mississippi, and the town of Okolona, Mississippi, are both named for him. The once prosperous town of Cotton Gin Port no longer exists. The arrival of the Kansas City, Memphis & Birmingham Railroad caused extinction as the town folk moved to Amory, Mississippi.

In the meantime, Buzzard Roost continued to provide a post office until the 1850s. Today, Buzzard Roost is a stop on Alabama’s 33-mile stretch of the Natchez Trace Parkway. A marker designates the spot, and the spring is just a short walk away. At the site are picnic tables and restrooms.

Buzzard Roost Spring is located on the Natchez Trace Parkway at milepost 320.3. 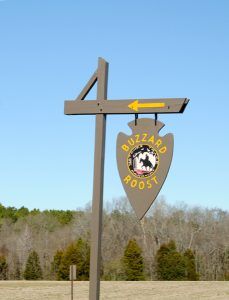 There are a couple of legends associated with Buzzard Roost and the Colbert Brothers. At Buzzard Roost, several visitors have told of paranormal-type events. These may be explained” by “residual memories” or, perhaps, some of the many travelers along the Trace never left.” Several people have told stories of having heard voices, some so clear that they have turned around to see who was talking, but no one was there. Others have felt as if someone has touched them or that something has wafted across their face or bodies. Yet more tales of ghostly legends and one of lost treasure surround the Colbert brothers at GeColbert’sert’s Ferry and inn site located just a few miles down the Trace. But, that’s a whole ‘nuther story.