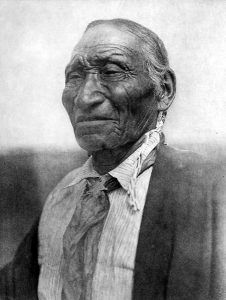 Old Crow was allegedly one of the members of the Dull Knife band of Cheyenne, which left the reservation in Indian Territory and made the memorable raid across Kansas in September and October 1878, killing 32 citizens and destroying much property. They were pursued; several were captured and confined at Fort Robinson, Nebraska for some time, when their wives succeeded in smuggling into them a number of guns, which were used on January 9, 1879, in making a dash for liberty.

However, the US Army hunted them down quickly and, by the next day, returned with 65 of them, 23 of whom were wounded. By January 22nd, the soldiers cornered and killed most of the last 32 escapees, as they were poorly armed and greatly outnumbered by 150 soldiers. This battle is referred to as the Fort Robinson Massacre. Among these men last captured was Old Crow.

Old Crow and six of his brother warriors were taken to Fort Leavenworth and later to Dodge City, their trial being set for June 24, 1879, in the District Court of Ford County. The charge against them being murder. A change of venue was asked for by the defense, which was granted, the case being sent to the District Court of Douglas County for trial at the succeeding October term, at which time all the Indians were liberated. 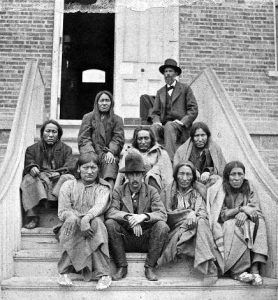 Army officers acquainted with Old Crow said that he had been employed by the government as a scout and had proven faithful, valuable, trustworthy, and bore a good reputation. They said he belonged to the Crow tribe instead of the Cheyenne and could have had no hand in the depredations of the latter in Kansas the previous year. He claimed to be a Sioux and was said to have been an Indian of more than ordinary intelligence.