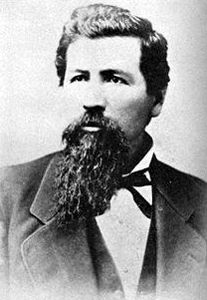 Although his father opposed the policy of the Cherokee removal to the west, he accepted the inevitable and led a party of about 1,000 people on the Trail of Tears. At that time, Ned was seven years old. On their arrival in 1839, they settled on land near present-day Westville, Oklahoma, in a place they called Breadtown because it was where rations were issued when the Cherokee refugees arrived from the East. In 1841, his father established the Baptist Mission.

There the Cherokee Messenger newspaper was first issued in August 1844, the first periodical published in Oklahoma. When his father died the same year, 12-year-old Ned apprenticed at the newspaper. Later he went to work as a printer in Fort Smith, Arkansas.

In 1850, the 18-year-old accompanied his brother Dennis to California, where they landed in Placerville to seek their fortunes in the goldfields. By 1853, however, Ned had moved to Calaveras County, where he started a newspaper called the San Andreas Register in October 1867. This, however, was short-lived, as he then moved to San Diego, where he became the “silent” publisher of the San Diego Union, which was first published on October 10, 1868. The same year, his brother Dennis returned to the Cherokee Nation, but Ned stayed in California.

“No better man could have been selected. Thoroughly honest, cool, brave and intrepid in time of danger, patient, wary and sagacious when on the trail of a criminal; courtesy and gentle — generous almost to lavishness, he is a true type of thorough American gentleman.”

In 1889, he became a partner in the printing firm of Gould, Hutton & Company. In 1899 he became the Chief of Police in San Diego, California, a position he held until 1903.

Due to health reasons, he moved to Alpine, California, in 1907, where he died on March 4, 1907. He was 75 years old at the time of his death. His body was returned to Oklahoma, where it was buried in the family cemetery at Talequah.