Chief Satank, known to his people as Setangya or Sitting Bear, was a noted Kiowa chief, medicine man, and leader of the Kiowa honor society called “Koitsenk”, or the “Ten Bravest Warriors.”

He was born in the Black Hills region of South Dakota in about 1810. He became prominent at an early age and is credited with having been a principal-agent in negotiating the final peace between the Kiowa and the Cheyenne in about 1840. His name heads the list of signers of the noted Medicine Lodge Treaty of 1867, though he signed it with reluctance. When placed on the Fort Sill, Oklahoma reservation, he soon began resisting authority. In 1870 his son was killed by white men during a revenge raid in Texas and he soon began to lead attacks on settlers himself.

On May 18, 1871, in company with Kiowa warriors, Satanta and Big Tree, he led the Warren Wagon Train Raid in Texas. Also known as “The Salt Creek Massacre,” the incident occurred as Henry Warren was contracted to haul supplies to Texas forts including Fort Richardson, Fort Griffin, and Fort Concho.

While the freight train was traveling down the Jacksboro-Belknap Road on May 18th towards Salt Creek Crossing, they encountered General William T. Sherman, who had earlier allowed the Satanta and his men to pass unmolested. Less than an hour later, the wagon train spotted a group of about 100 warriors.

Recognizing an imminent attack, the wagon train quickly pulled into a ring formation, but the 12 teamsters were overwhelmed by the warriors. When the attack was over, the Indians captured all of the supplies and killed and mutilated seven of the wagoneers. Five men managed to escape and Thomas Brazeale was able to reach Fort Richardson on foot, some 20 miles away. When Colonel Ranald S. Mackenzie learned of the attack, he immediately informed General Sherman, who in turn dispatched Mackenzie to bring the offending Indians to justice.

After making public boasts of the deed to the agent at Fort Sill, Satank, along with Satanta and Big Tree were arrested by military authorities to be sent to Texas for trial. Satank, however, refused to be a prisoner, and deliberately inviting death, wrenched the fetters from his wrists, drew a concealed knife, and sprang upon a guard. He was shot to death by the soldiers and was buried in the military cemetery at Fort Sill, Oklahoma. 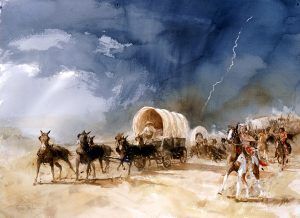