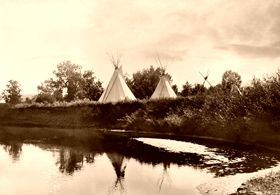 The Blackfoot Confederacy is the name given to four Native American tribes in the Northwestern Plains, which include the North Piegan the South Piegan, the Blood, and the Siksika tribes. In the beginning, they occupied a large territory stretching from the North Saskatchewan River in Canada to the Missouri River in Montana. The four groups, sharing a common language and culture, had treaties of mutual defense, gathered for ceremonial rituals, and freely intermarried.

Typical of the Plains Indians in many aspects of their culture, the Blackfoot, also known as Blackfeet, were nomadic hunter-gatherers, living in teepees and subsisting primarily on buffalo and gathered vegetable foods.

Originally living in the northern Great Lakes Region, the Blackfoot was one of the first tribes to begin moving Westward. Thought to have been pushed out by their arch enemies, the Cree Indians, the Blackfoot began to roam the northern plains from Saskatchewan to the Rocky Mountains.

Oral tradition indicates that the buffalo were first hunted in drives and deer and smaller game were caught with snares. Although fish were abundant, they were eaten only when no other meat source was available.

During the winter, the Blackfoot separated into bands near wooded areas of approximately 10 to 20 lodges, each encompassing somewhere between 100 and 200 people. Each band, led by a Chief, was large enough to defend against attacks but small enough to be mobile should provisions run short. The size also provided for buffalo hunts in the timbered regions where buffalo often wintered, sheltered from the storms and making them easy prey. Bands were defined by residence rather than kinship and members were free to join other bands whenever they liked. Leaders of each band was an informal process, defined by wealth, war success and ceremonial experiences. 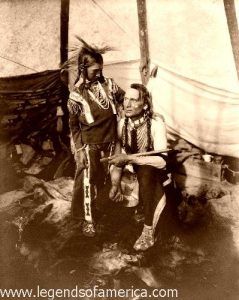 In the spring, when the buffalo moved out onto the grasslands, the Blackfoot followed after all trace of the winter had ended. During the summer, the Blackfoot lived in large tribal camps, hunting buffalo and engaging in ceremonial rituals. In mid-summer, the people grouped for a major tribal ceremony, the Sun Dance. The assembly provided for ceremonial rituals, social purposes, and warrior societies based on brave acts and deeds.. Large buffalo hunts provided food and offerings for the ceremonies. After the Sun Dance assembly, the Blackfoot once again separated to follow the buffalo.

The first time the Blackfoot saw horses was in 1730 when the Shoshone tribe attacked them on horseback. For this reason, the Blackfoot were pleased when Europeans began to arrive, allowing them to gain horses themselves. However, their sentiments changed quickly as smallpox epidemics ravaged their population in the mid-1800s. Though they continued to trade buffalo hides, horses and guns with the encroaching settlers, they primarily obtained their horses through trade with the Flathead, Kutenai and Nez Perce tribes.

January 23, 1870, one of the worse slaughters of Indians by American troops occurred, since known as the Marias Massacre. While the U.S. Cavalry was looking for a band of hostile Blackfoot Indians led by Mountain Chief, they stumbled instead, onto a peaceable band of Piegan Indians led by Chief Heavy Runner.

In the early morning hours, the cavalrymen spread out in an ambush position along the snowy bluffs overlooking the Marias River. The encampment was unprotected as most of the men were out hunting and before the command to fire was made, Chief Heavy Runner emerged from his lodge waving a safe-conduct paper. When an Army scout by the name of Joe Kipp shouted that this was the wrong camp, he was threatened into silence. Another scout, Joe Cobell, then fired the first shot, killing Heavy Runner and the massacre ensued.

When the carnage was over 173 lay dead – mostly women, children and the elderly. 140 others were captured, later to be turned loose without horses, adequate food, and clothing.

As the refugees made their way to Fort Benton, Montana, some ninety miles away, many of them froze to death. In the meantime, Mountain Chief and his people had escaped across the border into Canada.

The Blackfoot maintained their traditions and culture right up until the time that the white settlers had made the buffalo almost extinct. In 1877, the Canadian Blackfoot felt compelled to sign a treaty that placed them on a reservation in southern Alberta. In Montana, with the buffalo nearly extinct, many of the Blackfoot starved and were forced to depend upon the Indian Agency for food.

During the early part of the 1800s, the Blackfoot had an estimated population of approximately 20,000 people. However, the diseases brought on by the white settlers, including smallpox and measles, along with starvation and war reduced their number to less than 5,000 by the turn of the century.

In the face of these adversities, the Blackfoot have not lost their culture or their language. Today, there are approximately 25,000 Blackfoot members. The Piegan Blackfoot are located on the Blackfoot  Nation in northwestern Montana near Browning. The other three tribes are primarily located in Alberta, Canada.

2 thoughts on “The Blackfoot Indians – “Real” People of Montana”