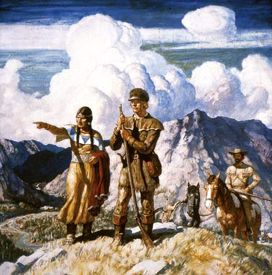 Born to the Lemhi tribe of Shoshone Indians in present-day Idaho in about 1788, Sacagawea would grow up to be a near-legendary figure for her indispensable role in the Lewis and Clark Expedition. The daughter of a Shoshone chief, she was kidnapped after a battle with Hidatsa Indians that resulted in the deaths of four Shoshone warriors and several women and children. She was only about ten years old. Taken back to the Hidatsa village near present-day Washburn, North Dakota, she quickly assimilated into the Hidatsa culture and learned to speak their language.

Sometime later, Sacagawea was sold to Toussaint Charbonneau, a French Canadian trapper, as his wife. In the winter of 1804, the Lewis and Clark Expedition were encamped near several Hidatsa villages to build Fort Mandan in North Dakota.

While there, they interviewed several trappers who could assist as guides and interpreters. They quickly hired Charbonneau as an interpreter when they discovered his wife spoke the Shoshone language, knowing they would need the help of the Shoshone tribes at the headwaters of the Missouri River.

By the time Charbonneau and his wife joined the expedition at Fort Mandan, Sacagawea was pregnant. The expedition welcomed her, for her language skills, with William Clark noting in his journal, “A woman with a party of men is a token of peace.”

Soon after joining the expedition, Sacagawea gave birth to her first child in February 1805, a son named Jean Baptiste Charbonneau. He was soon nicknamed “Pompey” by Clark. Carrying the baby on a cradleboard on her back, the “Corps of Discovery” headed up the Missouri River in April 1805. The following month, Sacagawea rescued several items that had fallen out of a capsized boat, including Lewis and Clark’s journals. The Corps Commanders were so pleased that they named the Sacagawea River in her honor.

Once the expedition reached Idaho, they were eager to find the Shoshone to trade with them for horses to carry supplies as they continued their journey over the mountains. In this effort, Sacagawea would prove invaluable. Recognizing several landmarks, Sacagawea led them to the Shoshone and, once found in August 1805, helped in translations with her people. To her surprise, when the expedition located the tribe, Sacagawea found the band was led by her older brother, Cameahwait, who had become chief after their father’s death. The reunion helped in smoothing the way for the expedition and gaining the valuable horses they desperately needed.

Later, Sacagawea would continue with the expedition to the Pacific Ocean. In 1806, the expedition began its trek back eastward, where Sacagawea was again an invaluable guide. Clark praised her as his “pilot” as she recalled the trails from her childhood, one of which would later become known as Bozeman Pass, Montana. The expedition returned to the Hidatsa-Mandan villages in August 1806, where Charbonneau and Sacagawea parted with Lewis and Clark and spent the next three years living among the Hidatsa. Charbonneau was paid $500.33 and 320 acres of land for his efforts.

In 1809 Charbonneau, Sacagawea, and their son, Jean Baptiste, traveled to St. Louis, Missouri, at the invitation of William Clark. The latter had grown fond of the young Pompey and hoped to entice Charbonneau to settle there. 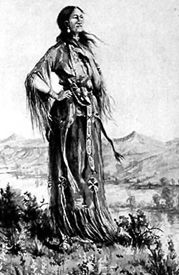 However, Charbonneau and Sacagawea soon left St. Louis, leaving their son, Jean Baptiste, in Clark’s care. The boy was enrolled in the St. Louis Academy boarding school. Sometime around 1811, Sacagawea gave birth to a daughter, Lizette. Two years later, history records that Sacagawea died on December 22, 1812, at Fort Manuel, a Missouri Fur Company trading post in present-day South Dakota, of “putrid fever.” She was only about 24 years old.

However, the Eastern Shoshone oral traditions say that Sacagawea rejoined the Shoshone people in 1871 on their Wind River reservation in Wyoming, where she was known as Porivo or Lost Woman. After living a long life, she died at nearly 100 years of age in 1884 and was buried in what is now called Sacajawea Cemetery near Fort Washakie,  Wyoming.

But, in August 1813, William Clark was known to have legally adopted Sacagawea’s two children, Jean Baptiste and Lizette. Jean Baptiste Charbonneau lived a long and adventurous life, traveling to Europe and later becoming a guide with John Fremont and other mountain men. He died in 1866 at age 61 on the trail to a gold strike in Montana. It is not believed that Lizette survived childhood, as there is no later record of her among Clark’s papers.

In the meantime, Toussaint Charbonneau continued his life as a mountain man, working for the American Fur Company and accompanying Prince Maximillian’s expedition in 1833. Over the years, he had at least five different Indian wives. He died at Fort Mandan in 1843.