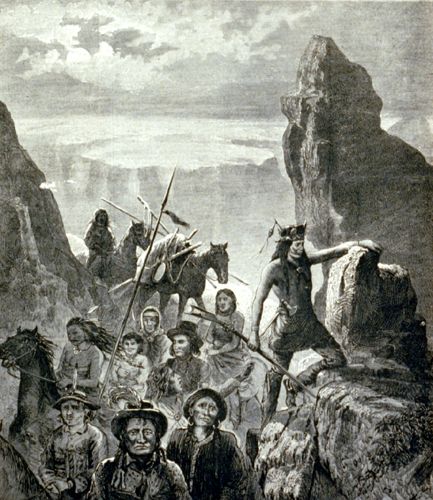 Schonchin, also known as Old Schonchin and Skonches, was the recognized head chief of the Modoc Indians at the time of the Modoc War of 1872-73.

Schonchin was born at Tule Lake, California in about 1797. Through his efforts and abilities, he was made a chief, but because he was not a hereditary chief, his authority was sometimes disputed. However, in 1846, he commanded approximately 600 Modoc Warriors. He took an active part in the early hostilities between the Modoc and the white settlers, admitting that he did everything in his power to exterminate his enemies.

Hostilities continued intermittently until 1864, when Old Schonchin (called such to distinguish him from his brother,) and Schonchin John his younger brother, negotiated a treaty, which placed the  Modoc on a reservation with the Klamath Indians. Schonchin then led his people to the reservation and honored the terms of the treaty. However, he could not control Kintpuash, known as Captain Jack, when the Modoc War erupted in 1872.

His brother John, following Captain Jack, withdrew from the reservation and moved to his old home on the Lost River. The old chief made every effort to induce Captain Jack to return, but the latter steadfastly refused, on the grounds that he could not live in peace with the Klamath Indians.

In response, Schonchin worked to divide the reservation into distinct districts, with a separate district being set apart exclusively for the Modoc. Though several of Captain Jack’s followers returned to the new district, others, including Schonchin John, refused and fled to the lava beds.

From this stronghold, the renegade Modoc waged a destructive war. It is believed that Schonchin John, more than any other member of the tribe, was influential in keeping up the strife. He repeatedly advised continuing the fight when even Captain Jack would have made peace, and he was considered responsible for many of the inhuman acts committed.

In 1873 a peace commission was appointed to deal with the Modoc Indians and a meeting with them was arranged for April 11th. To this meeting, the Indians agreed to send a number of unarmed men equal to that of the commission. Though the commission was warned that their lives were in danger, General Edward Canby and Reverend E. Thomas insisted that it was plainly their duty to go. The four commissioners, accompanied by interpreter, Frank Riddle and his Modoc wife, Winema, proceeded to the meeting place when they were met by eight fully armed Modoc Indians.

The council opened with brief speeches by Thomas and Canby offering the terms of peace, only to be interrupted by Schonchin John, who angrily commanded, “Take away your soldiers and give us Hot Creek for a home!” Before the commissioners could reply, at a signal from Captain Jack the Indians fell upon the white men. Canby and Thomas were shot to death, Commissioner Dyar fled and escaped, and Meacham was shot five times by Schonchin John, but finally recovered.

As a result of this massacre, military operations were resumed and after several bloody engagements, Captain Jack and his followers surrendered on June 1, 1873. After a military trial, several of the renegade leaders, including Captain Jack and Schonchin John were found guilty and hanged at Fort Klamath on October 3, 1873. 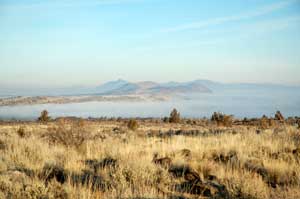 Old Schonchin attended the execution and told his brother he came “not to bid you farewell, but to see if you die like a man. I see you lack courage, I see tears in your eyes. You would not and did not listen to me, so now I say I cast you to the four winds. You are no brother of mine…, so now die. I cast you away.”

The old chief continued to live on the reservation until his death at the age of 95 in 1892.