A street in modern-day Taos, New Mexico by Kathy Weiser-Alexander.

Taos, New Mexico, the county seat of Taos County is located in the northcentral part of the state in the midst of the Sangre de Cristo Mountains. The town derives its name from the native Taos language meaning “place of red willows.” Its long history dates back hundreds of years and today proudly incorporates three cultures — Native American, Anglo, and Hispanic — into a beautiful city with a heritage of colorful people.

The Taos Valley, with its two great Pueblos, the old town of Fernando de Taos, and the still more ancient settlement known as Ranchos de Taos, is one of the most fascinating and historical points in the West.

Most of the eastern boundary of Taos County is occupied by the Taos Range of the Rocky Mountains and Taos Valley itself is one of the most picturesque in existence. On the east, it is surrounded by a half-moon of mountains, with no foothills extending into the mesas to diminish the grandeur of the scene. Eleven streams issue from these mountains and across the valley in a westerly direction and the Rio Grande cuts through it in a 500 feet deep canyon.

Long before the region was discovered by European explorers, it had been inhabited as early as 12,000 BC when early inhabitants roamed the area, hunting large mammals, such as mammoths, and gathering wild foods for subsistence. By 3000 BC, the people began to adopt the idea of agriculture from neighbors in Mexico, which began to restrict their movements and develop long-term communities.

The ancestors of the Pueblo people, commonly known as the Anasazi, were the first permanent inhabitants of Taos Valley. Room blocks and pit houses in the Taos area testify to their presence since 900 AD. Around 1200 AD, they aggregated into small above-ground structures of 50-100 rooms. The Taos Pueblo that continues to stand today was probably built between A.D. 1300 and 1450.

Throughout its early years, Taos Pueblo was a central point of trade between the native populations along the Rio Grande River and their neighbors to the northwest, the Plains Tribes. Taos Pueblo hosted a trade fair each fall after the agricultural harvest. This fair impressed the first Spaniards who made contact with the ancient pueblo. Eventually, trade routes would link Taos to the northernmost towns of New Spain and the cities of Mexico via the famed Chihuahua Trail.

The first Spanish visitors to Taos Pueblo arrived in 1540 as members of the Francisco Vásquez de Coronado expedition, which stopped at many of  New Mexico’s pueblos in search of the rumored Seven Cities of Gold. At the time, Hernando de Alvarado described the pueblo as having adobe houses built very close together and stacked five or six stories high. The homes became narrower as they rose, with the roofs of each level providing the floors and terraces for those above. Surrounded by a low defensive wall, the community had two main clusters of buildings, one on each side of the Rio Grande, which provided water for the residents and their crops. 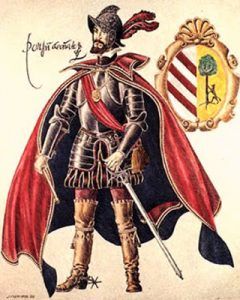 The first Spanish-influenced architecture appeared in Taos Pueblo after Fray Francisco de Zamora came there in 1598 to establish a mission, under orders from Spanish Governor, Don Juan de Oñate.

The village of Taos, first called Fernando de Taos, was established in about 1615, following the Spanish conquest of the Indian Pueblo villages by Geneva Vigil. Initially, the relations of the Spanish settlers with Taos Pueblo were amicable, but resentment of meddling by missionaries, and demands for a tribute to the church and Spanish colonists led to a number of revolts. Taos would become the center of many of the pueblo rebellions against the Spanish, the first of which almost occurred in 1609 when Governor Don Juan de Oñate was accused of throwing a young Taos Indian from a rooftop. However, Oñate was soon removed from office. Another small revolt was quickly subdued in 1613. But, these small insurgencies did not stop the determined Spanish priests and colonists. Around 1620, the first Catholic Church in the pueblo, San Geronimo de Taos, was constructed.

Reports from the period indicate that the native people of Taos resisted the building of the church and the imposition of the Catholic religion. Throughout the 1600s, cultural tensions grew between the native populations of the Southwest and the increasing Spanish presence. In 1631, another event occurred in the rebellion of the Spaniards when a resident missionary and the soldiers who escorted him were attacked and killed. Tensions continued to grow and in 1640, the Taos Indians killed their priest and a number of Spanish settlers and fled the pueblo. The people would not return to their pueblo for more than two decades, in 1661. 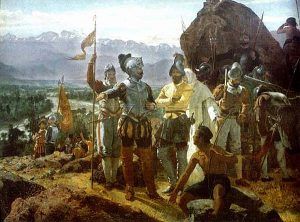 In the 1670s, drought swept the region, which caused famine among the pueblos and provoked increased attacks from neighboring nomadic tribes. Due to the number of attacks, the Spanish soldiers were not always able to defend the pueblos. At about the same time, European-introduced diseases were ravaging the pueblos and greatly decreasing their numbers. Becoming increasingly dissatisfied with the Spanish, the Puebloans turned to their old religions, provoking a wave of repression from the Franciscan missionaries. While the missionaries had previously tended to ignore the occasional pueblo ceremonies as long as the people made some effort to attend mass, the Puebloans renewed vigor towards their religions caused Fray Alonso de Posada to forbid Kachina dances by the Pueblo Indians and ordered the missionaries to seize every mask, prayer stick, and effigy they could lay their hands on and burn them. Furthermore, the Indians were forbidden, on pain of death, to practice their native religions. When some Spanish officials tried to curb the power of the Franciscans, they were charged with heresy and tried before the Inquisition.

In 1675, the tension came to a head when Governor Juan Francisco Treviño ordered the arrest of 47 medicine men and accused them of practicing witchcraft. Four of the men were sentenced to be hanged – three of those sentences were carried out, while the fourth prisoner committed suicide. The remaining men were publicly whipped and sentenced to prison. When this news reached the Pueblo leaders, they moved in force to Santa Fe, where the prisoners were held. Because a large number of Spanish soldiers were away fighting the Apache, Governor Treviño released the prisoners. Among those who were released was a medicine man from the San Juan Pueblo (now known as Ohkay Owingeh), named Popé, who would soon become the leader of the Pueblo Rebellion. Popé then moved to Taos Pueblo and began plotting with men from other pueblos to drive the Spaniards out.

Before long, a well-coordinated effort of several pueblo villages was established in August of 1680. Throughout the upper Rio Grande basin north of El Paso to Taos, the Tewa, Tiwa, Hopi, Zuni and other Keresan-speaking pueblos, and even the non-pueblo Apache planned to simultaneously rise up against the Spanish.

On August 10, 1680, the attack, known as the Pueblo Revolt, was commenced by the Taos, Picuri, and Tewa Indians in their respective provinces against 40 Franciscans, and another 380 Spaniards, including men, women, and children. The Spaniards that were able to escape fled to Santa Fe and the Isleta Pueblo, one of the few pueblos that did not participate in the rebellion. Popé’s warriors, armed with Spanish weapons, then besieged Santa Fe, surrounding the city and cutting off its water supply. New Mexico Governor Antonio de Otermín, barricaded in the Governor’s Palace, soon called for a general retreat and on August 21st, the remaining 3,000 Spanish settlers streamed out of the capital city and headed for El Paso, Texas. Believing themselves the only survivors, the refugees at the Isleta Pueblo, also left for El Paso in September. In the meantime, the pueblo people destroyed most of the Spanish homes and buildings. The Taos Indians again destroyed San Geronimo and killed two priests.