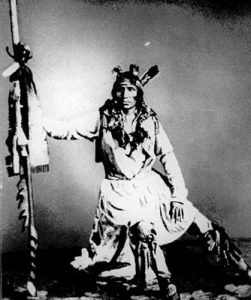 Chief Little Crow was the eldest son of Cetanwakuwa (Charging Hawk). It was on account of his father’s name, mistranslated Crow, that he was called by the whites “Little Crow.” His real name was Taoyateduta, meaning “His Red People”.

As far back as Minnesota history goes, a band of the Sioux called Kaposia (Light Weight, because they were said to travel light) inhabited the Mille Lacs region. Later they dwelt about St. Croix Falls, and still later near St. Paul. In 1840, Cetanwakuwa was still living in what is now West St. Paul, but he was soon after killed by the accidental discharge of his gun.

It was during a period of demoralization for the Kaposia that Little Crow became the leader of his people. His father, a well-known chief, had three wives, all from different bands of the Sioux. He was the only son of the first wife, a Leaf Dweller. There were two sons of the second and two of the third wife, and the second set of brothers conspired to kill their half-brother in order to keep the chieftainship in the family.

Two kegs of whiskey were bought, and all the men of the tribe invited to a feast. It was planned to pick some sort of quarrel when all were drunk, and in the confusion, Little Crow was to be murdered. The plot went smoothly until the last instant when a young brave saved the intended victim by knocking the gun aside with his hatchet so that the shot went wild. However, it broke his right arm, which remained crooked all his life. The friends of the young chieftain hastily withdrew, avoiding a general fight; and later the council of the Kaposias condemned the two brothers, both of whom were executed, leaving him in undisputed possession.

Such was the opening of a stormy career. Little Crow’s mother had been a chief’s daughter, celebrated for her beauty and spirit, and it is said that she used to plunge him into the lake through a hole in the ice, rubbing him afterward with snow, to strengthen his nerves, and that she would remain with him alone in the deep woods for days at a time, so that he might know that solitude is good, and not fear to be alone with nature.

“My son,” she would say, “if you are to be a leader of men, you must listen in silence to the mystery, the spirit.”

At a very early age, she made a feast for her boy and announced that he would fast two days. This is what might be called a formal presentation to the spirit of God. She greatly desired him to become a worthy leader according to the ideas of her people. It appears that she left her husband when he took a second wife and lived with her own band until her death. She did not marry again.

Little Crow was an intensely ambitious man and without physical fear. He was always in perfect training and early acquired the art of warfare of the Indian type. It is told of him that when he was about ten years old, he engaged with other boys in a sham battle on the shore of a lake near St. Paul. Both sides were encamped at a little distance from one another, and the rule was that the enemy must be surprised, otherwise the attack would be considered a failure. One must come within so many paces undiscovered in order to be counted successful. Our hero had a favorite dog which, at his earnest request, was allowed to take part in the game, and as a scout, he entered the enemy camp unseen, with the help of his dog.

When he was 12, he saved the life of a companion who had broken through the ice by tying the end of a pack line to a log, then at great risk to himself carrying it to the edge of the hole where his comrade went down. It is said that he also broke in, but both boys saved themselves by means of the line.

As a young man, Little Crow was always ready to serve his people as a messenger to other tribes, a duty involving much danger and hardship. He was also known as one of the best hunters in his band. Although still young, he had already a war record when he became chief of the Kaposia, at a time when the Sioux were facing the greatest and most far-reaching changes that had ever come to them.

At this juncture in the history of the northwest and its native inhabitants, the various fur companies had paramount influence. They did not hesitate to impress the Indians with the idea that they were the authorized representatives of the white races or peoples, and they were quick to realize the desirability of controlling the natives through their most influential chiefs. Little Crow became quite popular with post traders and factors. He was an orator as well as a diplomat, and one of the first of his nation to indulge in politics and promote unstable schemes to the detriment of his people.

When the United States Government went into the business of acquiring territory from the Indians so that the flood of western settlement might not be checked, commissions were sent out to negotiate treaties, and in case of failure, it often happened that a delegation of leading men of the tribe was invited to Washington. At that period, these visiting chiefs, attired in all the splendor of their costumes of the ceremony, were treated like ambassadors from foreign countries. 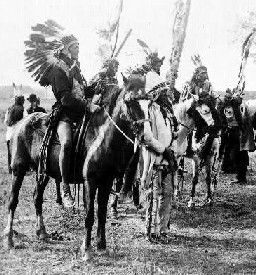 One winter in the late 1850s, a major general of the army gave a dinner to the Indian chiefs then in the city, and on this occasion, Little Crow was appointed toastmaster. There were present a number of Senators and members of Congress, as well as judges of the Supreme Court, cabinet officers, and other distinguished citizens. When all the guests were seated, the Sioux arose and addressed them with much dignity as follows:

“Warriors and friends: I am informed that the great white war chief who of his generosity and comradeship has given us this feast, has expressed the wish that we may follow to-night the usages and customs of my people. In other words, this is a warriors’ feast, a braves’ meal. I call upon the Ojibway chief, the Hole-in-the-Day, to give the lone wolf’s hunger call, after which we will join him in our usual manner.”

The tall and handsome Ojibway now rose and straightened his superb form to utter one of the clearest and longest wolf howls that were ever heard in Washington, and at its close came a tremendous burst of war whoops that fairly rent the air, and no doubt electrified the officials there present.

On one occasion Little Crow was invited by the commander of Fort Ridgeley, Minnesota, to call at the fort. On his way back, in company with a half-breed named Ross and the interpreter Mitchell, he was ambushed by a party of Ojibway and again wounded in the same arm that had been broken in his attempted assassination. His companion Ross was killed, but he managed to hold the war party at bay until help came and thus saved his life.