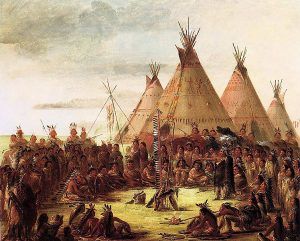 In October 1867 U.S. peace commissioners concluded treaties with the southern Plains tribes at this site that represent milestones in Government Indian relations. The treaties did not bring peace, but they were significant as the first such documents aimed at remaking the Plains Indians in the white man’s image and absorbing them into American society rather than merely removing them from areas of settlement. Thus, the treaties signaled a new era in Indian-white conflict — not only a struggle for land but also a struggle for cultural identity.

After the Civil War, when emigration surged and railroads pushed westward, the clash with the Indians intensified. Congressmen soon tired of destructive, costly, and indecisive military campaigns, such as that of General Winfield Hancock in Kansas in the spring of 1867. Also influenced by the agitation of humanitarians and Indian Bureau officials, Congress decided to seek a peaceful solution. In July 1867, it created a special Peace Commission to negotiate with the Plains tribes. Consisting of the Commissioner of Indian Affairs, three other prominent civilians, and three Army generals, it was charged with erasing the causes of war, ensuring the security of frontier settlements and railroad construction, and inaugurating a program to “civilize” the Indians. 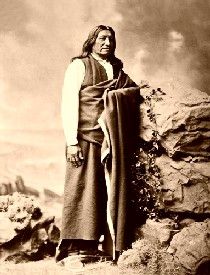 The commission originally planned to conclude a treaty with the northern Plains tribes at Fort Laramie, Wyoming before meeting with the southern Plains groups. In August the members held friendly but inconclusive councils with the Indians on a trip by steamboat up the Missouri River from Omaha, Nebraska where they proceeded from St. Louis, Missouri. En route by rail to Fort Laramie, they held a conference with the Sioux Chief Spotted Tail and others at North Platte, Nebraska and learned that the militant Sioux were not ready to confer. Postponing the Fort Laramie council until November, they proceeded to Fort Larned, Kansas to meet with the southern Plains tribes. Because the Southern Cheyenne refused to come near the string of posts on the Arkansas River, however, the commissioners agreed to negotiate with the Indians 70 miles south of the Arkansas River near a sacred Indian site not far from a small natural basin where Medicine Lodge River and Elm Creeks merged.

The commission party, which arrived on October 19, presented an impressive spectacle. It consisted of a two-mile-long caravan of nearly 100 wagons bearing supplies and gifts for the Indians.

Accompanying it were State officials, Indian agents, newspaper reporters, adventurers and an escort of 500 troops of the 7th Cavalry. Along both sides of Medicine Lodge River, thousands of Arapaho, Kiowa, Kiowa-Apache, and Comanche were camped. With the Southern Cheyenne, who had not yet arrived, the total number was estimated between 5,000 and 15,000. Negotiations took place beneath a specially constructed brush arbor 20 feet high in a clearing prepared for the occasion. 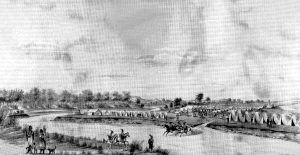 On October 21st, the Kiowa and Comanche signed one treaty and the Kiowa-Apache another. The Southern Cheyenne appeared on October 27, and the following day they and the Arapaho concluded a treaty. The three peace treaties were generally similar to one another and to those subsequently signed at Fort Laramie. The tribes agreed to move onto reservations set aside in Indian Territory, partly on lands the U.S. Government had forced the Five Civilized Tribes to relinquish because of their support of the Confederacy. The Kiowa, Kiowa-Apache, and Comanche reservation was to be located between the Red and Washita Rivers in southwestern Indian Territory and the Arapaho-Cheyenne reservation, to the northeast between the Cimarron and Arkansas Rivers south of the Kansas border. In 1869 these reservations were formally created, with the Darlington Agency and Fort Reno supervising the Cheyenne-Arapaho Reservation and the Fort Sill Agency and Fort Sill controlling the Kiowa-Comanche Reservation.

The United States promised to provide the reservations, where the would pursue farming, with educational, medical, and agricultural facilities as well as food and other annuities; and to grant hunting rights to the five tribes for an indefinite period in the area south of the Arkansas River. The Indians promised not to attack settlers or oppose railroad and military construction. They also relinquished claims to all lands outside the reservations.

Immediately after completing the Medicine Lodge treaties, the commissioners proceeded to Fort Laramie, where they arrived on November 9, 1867. But the last of the northern Plains tribes did not sign treaties until the following November. Neither of these groups of treaties brought more than temporary peace. On the southern Plains, war broke out before a year had passed, and General Philip Sheridan responded in his punitive winter campaign of 1868-69. 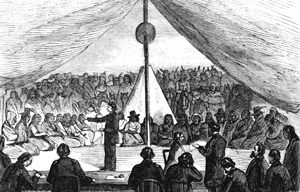 The treaties were signed in the area south and east of the modern town of Medicine Lodge. This tract, in public and private ownership, includes the swampy and heavily wooded confluence of Medicine Lodge and Elm Creeks. A dirt road, branching off South Main Street and paralleling Elm Creek, approaches within about 50 yards of the confluence of the creeks. The Indian camps were along both banks of Medicine Lodge Creek. Cultivated farmlands today line its northern side.

In Medicine Lodge is a 400-acre Memorial Peace Park, a natural amphitheater owned by the Medicine Lodge Peace Treaty Association that overlooks the Indian campgrounds and treaty-signing site. Since 1927, at 5-year intervals, Medicine Lodge citizens have presented at this park a pageant depicting the treaty signing and later settlement. The Centennial Pageant includes as many as 1,200 participants, including several hundred descendants of the Plains Indians who had gathered there a century before. The northern part of the park is a city golf course. 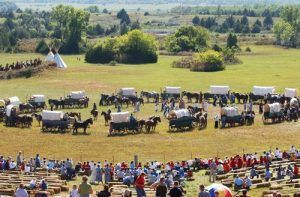 Compiled and edited by Kathy Weiser/Legends of Kansas, updated December 2020.

Hancock’s War on the Plains