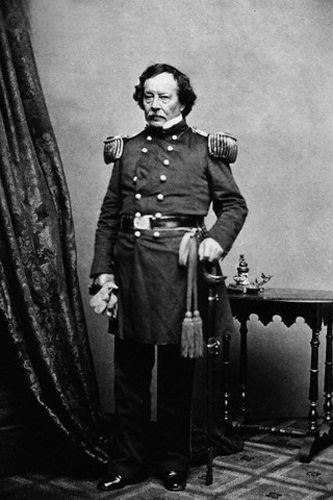 A French-born army officer, frontiersman, and explorer of the American West, Benjamin Louis Eulalie de Bonneville was born on April 14, 1796, in Paris, France. His family moved to the United States in 1803.

Benjamin was well-educated and graduated from West Point in 1815. He then received a commission as a Brevet Second Lieutenant of Light Artillery and, in his early career, served at posts in New England, Mississippi, and Fort Smith, Arkansas. In 1824, he was transferred to Fort Gibson, Oklahoma, and promoted to Captain. After briefly returning to France, Bonneville was transferred to Jefferson Barracks in Missouri in 1828.

While in Missouri, Bonneville was inspired by the writings of Hall J. Kelley and editorials in the St. Louis Enquirer, edited by Thomas Hart Benton, that promoted exploration of the American West.

Bonneville met with Kelley, who was impressed by him and appointed him to lead one of the expeditions to the Oregon Country that were to leave in early 1832. However, the lack of volunteers for the expedition forced the delay and eventual cancellation of the expedition, leaving Bonneville still anxiously wanting to explore the west.

Determined, Bonneville petitioned for a leave of absence, arguing that he could perform valuable reconnaissance among the Native Americans, especially in the Pacific Northwest, which at the time was under a precarious joint occupation of the U.S. and Britain primarily controlled by the Hudson’s Bay Company. His leave of absence was granted with the stipulation that he gathers as much information as possible to provide to the federal government.

In 1832, Bonneville led 110 men, including explorer and trader Nathaniel Jarvis Wyeth, on an expedition into Wyoming Territory. The expedition was financed by John Jacob Astor, the owner of the American Fur Company. Proceeding up the Missouri River and then to the Platte River, they reached the Green River in Wyoming in August and built a winter fort named Fort Bonneville.

The following spring, the expedition explored the Snake River in present-day Idaho, and another party, under the leadership of Joseph Walker, was sent to explore the Great Salt Lake and to try to find an overland route to California. Walker was successful, blazing a trail along the Humboldt River across Nevada and discovering a pass across the Sierra Nevada Mountains that would be named for him. Walker Pass and the path he had blazed later became known as the California Trail and was much used during the California Gold Rush. 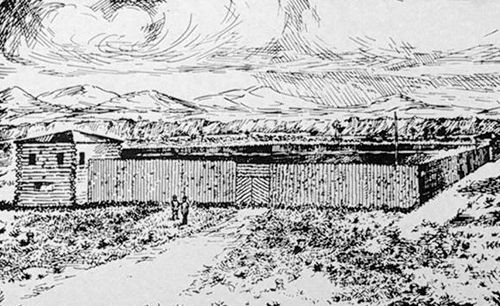 Bonneville and his men spent the summer and fall of 1833 in Wyoming, trading with the Shoshone Indians. In January 1834, they left Fort Bonneville with the objective of reaching Oregon. In March 1834, they reached Fort Nez Perce, an outpost of the Hudson’s Bay Company, which refused to trade with them. They then backtracked to Idaho. At this time, the Hudson’s Bay Company held a monopoly in the Pacific Northwest. Many Indian tribes refused to trade with the expedition, even when they became desperate for food. Finally, the expedition began the trek back in April 1835. They reached Missouri in August.

He soon returned to active duty and fought in the Mexican War and the Civil War. He retired from the military in 1866 and moved to Fort Smith, Arkansas, where he died at the age of 82 on June 12, 1878. He was buried in Bellefontaine Cemetery, St. Louis, Missouri.

During his lifetime, his explorations were made famous by the writer Washington Irving, who published the book, The Adventures of Captain Bonneville in 1837.