The Smoky Hill Trail was established in 1859 to cross the Great Plains of Kansas to Colorado during the Pike’s Peak Gold Rush. The trail ran from Atchison, Kansas, on the Missouri River to Denver, Colorado. For most of the way, it followed the Smoky Hill River.

When gold was found in Cherry Creek (Denver, Colorado) in 1859, thousands of people wanted to make their way to the Rocky Mountains to find their fortunes. At this time, there was no “official path” across Kansas, and the westernmost post was in Salina (about 175 miles southwest of Leavenworth, one of the jumping-off points of the Oregon Trail.) Before this time, those headed westward on the Santa Fe or Oregon Trails turned north or south, specifically to avoid the high peaks of the Rocky Mountains. But, when the news of Colorado Gold reached Kansas City, pioneers were determined to find a faster way to get there. 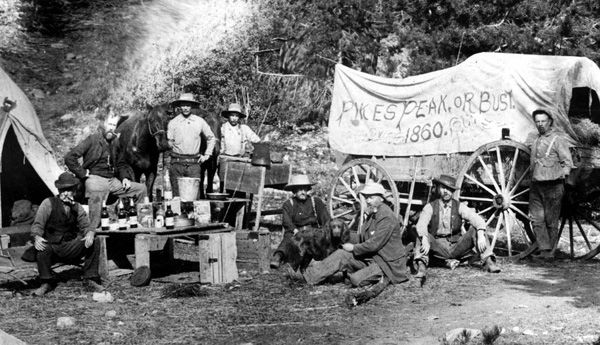 The Smoky Hill Trail, which followed an ancient Indian trail along the Smoky Hill River, was soon blazed and became the fastest path to the goldfields.

The trail was named for the Smoky Hill River, which was surrounded by isolated buttes near Abilene, Kansas. As these landmarks often appeared surrounded by hazy smoke, the river and the trail took the name.

Though the trail was far harder and more dangerous than the other prairie trails from the Missouri River to the Rockies, pioneers ignored the possibility of Indian attacks and the scarcity of water to reach the Rocky Mountains. 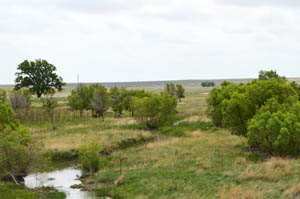 Travelers along the path outfitted in Leavenworth, Kansas City, Abilene, or Salina, before following the  Smoky Hill River to its headwaters in west-central Colorado, near Old Cheyenne Wells. Here, the Trail divided into the North Smoky and South Smoky, taking two different paths, ending in Denver. Another path also branched out called the “Middle Smoky Hill,” which would later become known as “Starvation Trail,” when the Blue brothers got caught in this desolate area. The only surviving member was forced to resort to cannibalism.

Thousands of prospectors, homesteaders, and soldiers, traveled the trail between 1859 and 1865, many in covered wagons and some on foot, pushing carts and wheelbarrows. Though many survived the trip, often nearly starved, others died at the hands of hostile Indians, thirst, and starvation, and the chilling cold once that neared the mountains.

In 1858, W.H. Russell of the famous transportation firm Majors, Russell and Waddell, conceived the idea of a line of daily coaches between the Missouri River and Denver. However, his partners thought the idea fool-hardy and refused to go in with him. Russell persevered, however, and the first stage on the newly formed Leavenworth and Pikes Peak Express reached Denver on May 17, 1859. But, as his partners suspected, the project proved to be premature, and at the end of the 90 days, they took over and transferred his equipment to their regular stage line on the Platte River.

Another stage would later be developed on the Smoky Hill Trail in 1865 when David A. Butterfield determined it could be profitable. The smooth-talking businessman soon obtained capital for the “Butterfield Overland Despatch.” The first train left Atchison on June 4, 1865, arriving in Denver on September 23.

Along the 592 miles long route, relay stations were built about every 12 miles for passengers’ rest, food, and changing of horses. Soldiers were also posted along the pathway at Fort Downer, Fort Harker, Fort Monument, Fort Wallace, and other stops to protect the stations and the travelers from Indian attacks. However, the soldiers could not keep up with the furious Indians who felt their land was being invaded. 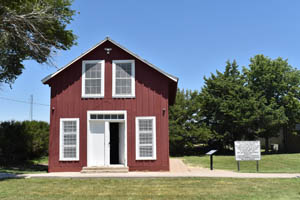 A year later, Butterfield sold out in March 1866 to his rival, Ben Holladay, who sold it to Wells-Fargo the same year. During this time, the Kansas Pacific Railroad was also pushing towards Denver, and by 1870, the stage line was no longer needed.

Unfortunately, it also saw many deaths along its dusty path, including the Jordon and German family massacres, the Indian raids that led to the Battle of Beecher Island and Summit Springs; as well as the escape of Cheyenne leader Dull Knife and his people from Fort Reno, Oklahoma, that left numerous dead along the Smoky Hill River.

Today, the old trail is designated by markers placed along the route, and the Pond Creek Stage Station can still be seen in Wallace, Kansas. Several of the old forts that once protected the trail can still be seen, including Fort Hays, Fort Harker, and Fort Larned. Three museums are dedicated to the trail in Kansas, the Smoky Hill Museum in Salina, the Butterfield Trail Museum in Russell Springs, and the Fort Wallace Museum in Wallace. Three “Mile Houses” remain in Parker, north of Parker, and in Denver in Colorado. 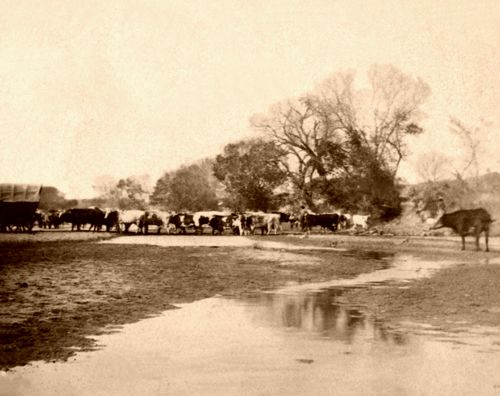 Cattle at the Smoky Hill River

A Journey to Denver via the Butterfield Overland Despatch