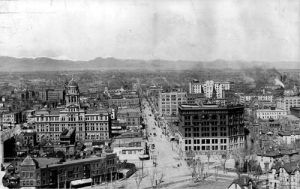 At the base of the majestic Rocky Mountains, Denver is not only one of America’s most beautiful cities but is also one of Colorado’s most haunted.

Originally founded in the Kansas Territory in 1858, the first settlement was established on the banks of the South Platte River. With the area’s rich mining resources, the city grew quickly as land parcels were often traded for grubstakes. Colorado became a separate territory in 1861 and a couple of months later, Denver was incorporated on November 7, 1861.

Initially catering primarily to the miners, Denver was filled with gambling halls and saloons, but quickly expanded to include a host of other businesses including livestock trading and a supply point for destinations west. In 1865, Denver became the capital of the Colorado Territory.

By 1890, Denver had grown to be the second-largest city west of Omaha, Nebraska, second only to San Francisco.

Not only does Denver have a long and rich history, but the past has left in its wake, a plethora of ghosts that are said to roam its historic streets and buildings. 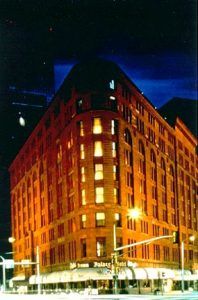 Brown Palace Hotel – This century-old luxury hotel is said to host a number of spirits in its historic rooms and hallways. The ghost of an old railroad ticket manager walks directly into a wall, a baby is heard crying in the basement, an ethereal waiter rides the service elevator, and a long-dead string quartet has been known to practice their music here.

Buckhorn Exchange – Denver’s oldest restaurant began its life as little more than a trading post way back in 1893. Today, the Buckhorn continues a century-old tradition of serving up wild game and steaks in an old west atmosphere. According to the tales, some of the many old traders, miners, scouts, and cowboy continue to lurk about this historic steakhouse, as ethereal voices and footsteps are often heard and tables seemingly move of their own accord. 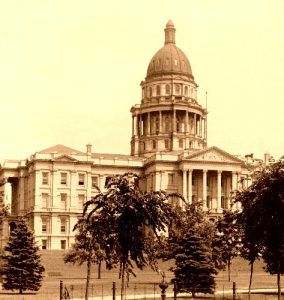 Capitol Hill – Once the neighborhood of Denver’s wealthiest citizens, Capitol Hill continues to wear its decadent image with honor, blending the past with the present, as ancient Victorian mansions and contemporary condos and apartment complexes dot the neighborhood. Also here in this historic neighborhood, are a bevy of ghosts. Ghost tours of the area tell of numerous entities who continue to inhabit this historic neighborhood. At the old Governor’s Mansion, ghosts are said to walk the halls, at the State Capitol buildings, a phantom woman in a long dress is often known to appear.

At one location, a house once stood that was the inspiration for the 1980 horror film, “The Changeling.” Though the ghostly tours offered of Capitol Hill vary, they often include the State Capitol, Grant-Humphries Mansion, the Croke-Patterson Mansion, Cheesman Park, the Brown Palace Hotel, and the Molly Brown House.

Cheesman Park – During the 19th century, this park was a cemetery for decades. Though intended for the masses, the graveyard ended up being mostly for outlaws, paupers, and the diseased. When it became overgrown and a terrible eyesore, the city made it into a park. However, as many as 2,000 bodies are said to remain buried here and the restless spirits continue to roam the park and the surrounding neighborhood. 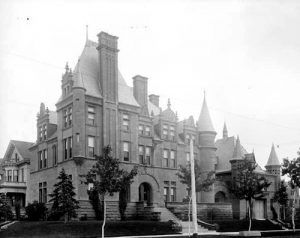 Croke Patterson Mansion – Built in 1890 by Thomas B. Croke, this sandstone residence was one of the country’s most elegant homes. Now serving as an office building, it is also said to be one of the most haunted.

According to the legend Thomas B. Croke, only entered the palatial mansion one time and was so emotionally shaken by “whatever” was there, that he never returned. Just two years later it was sold to Thomas M. Patterson, who’s family kept the home for several decades. Over the next several years, the building served many purposes, including a dance studio, a radio station, and a boarding house before it was converted to an office building.  During the renovation to office space in the 1970s, construction crews began to experience a number of strange occurrences.

After a long days work, they would often return the next day to find that the tasks they had completed the day before had been “undone.” After this had occurred several times, guard dogs were left to protect the property from what the workmen thought might be intruders. However, the next day they found the two Doberman Pinschers dead on the sidewalk after having apparently jumped from a third-story window. Once the renovation to office building was complete, employees almost immediately began to notice equipment, such as typewriters, copy machines, and telephone that mysteriously began to operate by themselves.

When a séance was held to determine who was haunting the building, they found it to be the spirit of a little girl whose body was supposedly entombed in the cellar. However, when the basement was excavated, they found a hidden chamber was found, filled with sea sand, but no remains of a little girl.

A ghostly image has often been sighted gliding up and down the main floor stairway and otherworldly voices have been heard here as well. Thomas Patterson, former owner of the home, is said to have been spied numerous times in the courtyard between the mansion and the carriage house.

When the building still served as an apartment building, occupants on the lower levels were known to complain about wild parties taking place on the third level. But, when these parties were investigated, they would be met with only silent emptiness.

Denver Children’s Home – Located at Albion Street and Colfax Avenue and continuing to provide youth services today, this building was known as the Denver Orphan’s Home in the late 1880s. In 1888, a fire broke out in the building, killing several children on the third floor. Though numerous exorcisms have been conducted in the building over the years, the sounds of children playing, as well as whimpers and cries continue to be heard on a regular basis. In addition to the children, the female spirit of a ghostly bride has been seen floating down the third-floor steps and across the 50-foot length of the second-floor hallway. 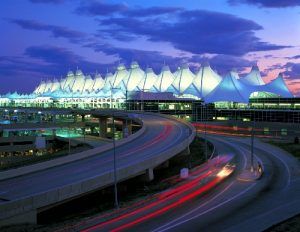 Denver International Airport – Everyone, no doubt, remembers or has at least heard of, the terrible problems that were encountered when building the airport in 1995. Grossly over its budget of 1.7 billion dollars, the airport was buried in technical problems during its building, especially regarding the automated baggage system. In the end, the airport cost $4.8 billion! These problems, as well as reports of employees and travelers experiencing a number of strange incidents at the airport today, is attributed to the fact that the airport was built on top of Native American sacred ground.

The Denver Press Club – A couple of spirits have been seen here, one of which is very friendly also likes to visit the neighboring Colorado Press Association. The other ghost, however, is said to be very eerie and is most often known to lurk about the dingy boiler room in the basement.