Fort Wise, established just west of Bent’s New Fort in Colorado, was built in 1860 and named for Henry Wise, governor of Virginia. That same year, the U.S. Army leased from William Bent his fortification, which consisted of 12 rooms surrounding a central courtyard. Bent’s New Fort buildings were used as a commissary for the fort and housing the Upper Arkansas Indian Agency. The post served as an important military link on the Santa Fe Trail between Fort Leavenworth, Kansas, and Fort Union, New Mexico.

In 1861, when the Civil War began, the government, not wanting to recognize Confederate leaders, changed the name of the post to Fort Lyon in honor of General Nathaniel Lyon, killed at the Battle of Wilson’s Creek, Missouri, on August 10, 1861.

In 1862, the fort’s garrison marched into New Mexico and helped defeat a Confederate force from Texas in the Battle of Glorieta Pass. During the rest of the Civil War, the post was the principal guardian of the Mountain Branch of the Santa Fe Trail. Cooperating with detachments from Fort Larned, Kansas, and Fort Union, New Mexico, its troops escorted traffic along the upper reaches of the Arkansas River to Raton Pass.

The fort was also involved with the uprising of Southern Cheyenne and Arapaho in Colorado that reached a climax in 1864. Three years before, a few chiefs, pacified by Colonel Edwin V. Sumner’s 1857 campaign, had concluded the Treaty of Fort Wise. Guaranteeing peace along the Santa Fe Trail and in the region, they relinquished all the territory assigned to their tribes by the Fort Laramie Treaty of 1851 and promised to settle on reservations. But, most of the other chiefs, refusing to be bound by the treaty, kept on hunting buffalo between the Platte and the Arkansas Rivers.

Miners and settlers continued to flow into Colorado when Colorado’s regular troops were serving in the Civil War. In the spring of 1864, a predictable collision occurred. Warriors raided roads and settlements throughout the summer and practically halted traffic on the Santa Fe Trail.

Coloradans obtained their revenge at Sand Creek, some 40 miles down the Arkansas River from Fort Lyon, where a group of peaceful Cheyenne Indians were encamped on their way to their new reservation in Oklahoma. In November 1864, the Cheyenne, who thought they were under the post’s protection, were slaughtered.

The Sand Creek Massacre resulted in a congressional investigation and a national wave of public indignation at killing elderly men, women, and children. It also infuriated the Plains Indians to such an extent that they launched a full-scale war.

During the summer of 1867, because of frequent flooding of the Arkansas River, unhealthful conditions, and the decreasing supply of timber, the Army relocated the fort 20 miles upstream and re-designated it as Fort Lyon No. 2. For a time, however, a Kansas City-Santa Fe stage line used the dirt-roofed stone buildings at the first Fort Lyon as a stage station. Later, the old post was burned by angry Indians.

The new Fort Lyon was also located on the Arkansas River, on a bluff about two miles below the mouth of the Purgatoire River east of present-day Las Animas, Colorado.

However, by the time of the fort’s activation, the need to protect the Mountain Branch of the Santa Fe Trail had lessened as the focus in the Indian campaigns shifted to Kansas and Oklahoma. However, troops from the fort did play a small part in General Philip Sheridan’s 1868-69 Indian campaign.

On May 23, 1868, famous Indian scout, trapper, guide, and former U.S. Army General, Kit Carson, died at Fort Lyon. In 1867, he had resigned his commission in the army and moved his family to Boggsville, Colorado, about three miles south of Fort Lyon, as he had been appointed Superintendent of Indian affairs for the Colorado Territory. 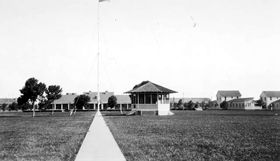 Though his health was beginning to fail and his wife was pregnant, he conducted a Ute delegation to Washington, D.C. in early 1868. His wife, Josefa, died in childbirth in April. With his health deteriorating even more, he visited Assistant U.S. Surgeon H.K. Tilden’s quarters at Fort Lyon. While there, he suffered an abdominal aortic aneurysm died at the age of 58. 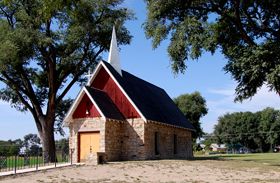 In 2001, the hospital was closed, and the site was turned over to the State of Colorado. It housed a minimum-security prison for a while, but that too closed, and the site was turned into the Fort Lyon Supportive Residential Community, which provides recovery-oriented transitional housing, counseling, education, and employment services to the homeless. The Fort Lyon National Cemetery, which began burials in 1907, remains open. Nearby is a chapel built from the stones of the building where Kit Carson died.

The site of the first Fort Lyon is located on a secondary road about 1.5 miles south of U.S. 50, some eight miles west of Lamar. Privately owned, there are no remains of the first fort, but a marker designates the site. 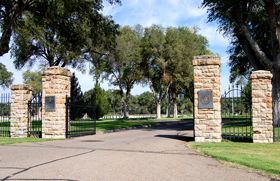