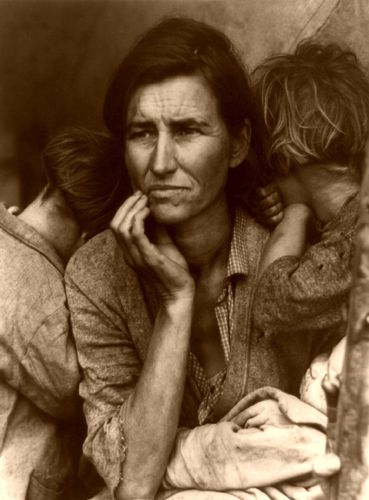 Migrant Mother during the Depression-era

A worldwide economic downturn, the Great Depression started in 1929, kicked off with the U.S. stock market crash, known as Black Tuesday, on October 29th. It was the largest and most severe economic depression in the 20th century.

Effecting virtually every country and both the rich and poor, the depression had devastating outcomes in international trade, personal income, prices, and profits. People of all walks of life were hit hard, especially those dependent on heavy industry, construction, farming, and mining.

The causes of the Great Depression were many and varied, beginning with rapid economic growth and financial excess of the “Roaring Twenties.” Excess applied not only to spending, but also to a change of values with women smoking, drinking, and wearing short skirts.

During this time, many Americans were quickly buying automobiles, appliances, and speculating in the stock market. Unfortunately, much of this wild spending was done on credit and while businesses were making huge gains, the average workers’ wages were not increasing at anywhere near the same rate. 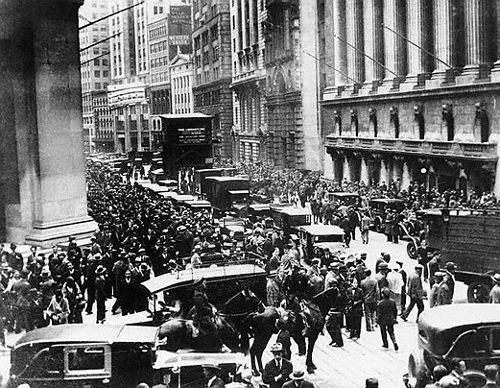 But, like other “booms” throughout history, the cycle soon led to a “bust.” As manufacturing output continued and farmers were overproducing, circumstances began to change, leading to falling prices and rising debt. At the same time, there was a major banking crisis, including “Black Tuesday” as well as serious policy mistakes of the Federal Reserve Board, which led to a fall in the money supply. Making matters worse for farmers, the “Dust Bowl Days” hit in the 1930s, caused by severe drought and decades of extensive farming without crop rotation.   Facing plummeting demand for products, bank failures, and global over investment, businesses began to lay-off employees in the thousands. However, the optimism of some major politicians and businessmen remained. Early on, John D. Rockefeller, an American industrialist, said: “These are days when many are discouraged. In the 93 years of my life, depressions have come and gone. Prosperity has always returned and will again.” President Herbert Hoover, underestimating the seriousness of the crisis, called it “a passing incident in our national lives,” and assured Americans that it would be over in 60 days. He was wrong.

The decline in the United States economy initiated a downturn in other countries before their own internal weaknesses or strengths determined if their fate was to be better or worse than that Americans were suffering.

The initial U.S. Government response to the crisis made the situation worse and resulted in American’s loss of confidence in the nation’s economic future. Protectionist policies like the 1930 Smoot-Hawley Tariff Act, which raised U.S. tariffs on over 20,000 imported goods to record levels, resulted in retaliation against U.S. Industries, strangling global trade. Industries that suffered the most included agriculture, mining, logging, durable goods, construction, and automobiles. 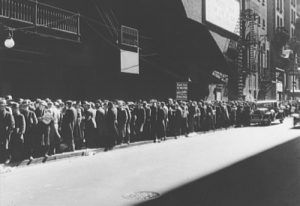 Food Line during the Great Depression

The depression caused major political changes including President Herbert Hoover’s loss in the presidential election of 1932 to Franklin  Roosevelt. The lowest point of the depression was during the winter of 1932-33, but Roosevelt’s economic recovery plan, called the “New Deal,” began to turn the nation around.

From 1933-1936, Roosevelt implemented several new programs such as the National Recovery Administration (NRA), which sought to stimulate demand and provide work and relief for the poor through increased government spending. Other relief and recovery measures included the Civil Works Administration (CWA) and the Public Works Administration (PWA), along with the use of previous agencies such as the Reconstruction Finance Corporation, to regulate and stimulate the economy. In 1935, more programs were added including the Works Progress Administration (WPA) and a national relief agency through the National Labor Relations Board, which provided a strong stimulus to the growth of labor unions.

During Roosevelt’s first term, unemployment fell by two-thirds and sustained improvement for five years, when the Recession of 1937 brought back 1934 levels temporarily. 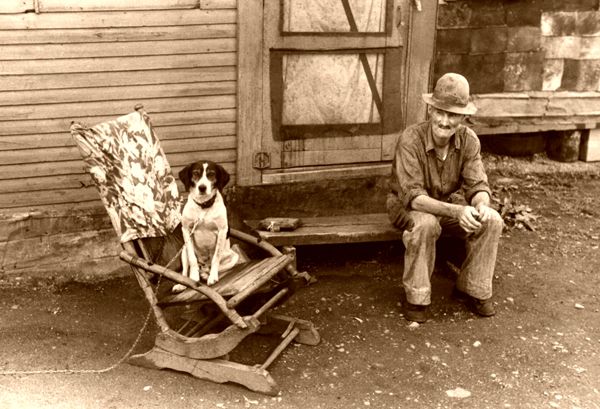 Finally, by May 1938 retail sales began to increase, employment improved, and industrial production was on the rise. After the recovery from the Recession of 1937, conservative politicians were able to stop further expansion of the New Deal, abolishing many of the programs.

The Great Depression ended at different times in different countries with the United States finally ending in 1941 with America’s entry into World War II.

During the peak years of the Depression, some 13 million people were unemployed in the United States, industrial production had fallen nearly 45%, homebuilding by 80%, 5,000 banks had failed, the stock market had lost almost 90% of its value, and over a million families had lost their farms.

During these turbulent times, individuals were affected not only financially, but also psychologically as unemployment caused self-blame and self-doubt. Men were harder hit than women, as they were expected to provide for their families and it was humiliating for them to ask for help. Ironically, while millions of men were out of work, the percentage of women working during the Depression increased, especially under the New Deal programs. And due to extremely low wages, children could sometimes find work when their parents could not. African Americans and other minorities suffered more than whites, as their jobs were often taken away and given to white people. In 1930, 50% percent of African Americans were unemployed.

The Great Depression and the New Deal changed the relationship between Americans and their government, with the people now expecting government involvement and responsibility in caring for the needy and regulating the economy.

It also created a liberal political alliance of labor unions, an acceptance of women working, African-American rights, and unfortunately, a new generation of outlaws and gangsters who profited during a time that others were starving.

These, including such infamous people as Bonnie and Clyde, John Dillinger, and dozens of others, operated in what is sometimes referred to as the “public enemy era” between 1931 and 1935. It also spawned in much of the American public strong habits of careful saving and frugality.

The Great Depression has been the subject of much literature over the years, as writers sought to evaluate an era that caused so much emotional and financial trauma. The most noteworthy novel of the time was The Grapes of Wrath by John Steinbeck, published in 1939. Awarded both the Nobel Prize for literature and the Pulitzer Prize, the novel focuses on a poor family of sharecroppers who travel from Oklahoma to California, during the Dustbowl Days of the 1930s, trying to find a better existence for themselves. 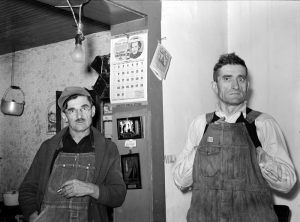 Former Coal Miners put to work by the WPA in Zeigler, Illinois by Arthur Rothstein, 1939