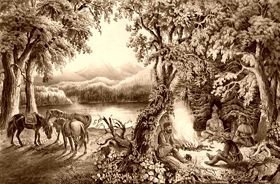 Sublette was born in Stanford, Kentucky, on September 21, 1798 (some sources list 1799). In 1817 he moved with his family to St. Charles, Missouri. By this time, William was six foot two inches tall, a strapping young man with sandy hair and blue eyes. He followed in his father’s footsteps, taking an interest in land, business, and politics. In 1820 he was appointed deputy constable of the township, then constable.

On the Missouri River, St. Charles saw a steady stream of fur trappers and traders to Indian country. William, an outdoorsman and like many other intelligent, enterprising young men, saw good reason to follow the river west.

The Rocky Mountain Fur Company was the first to depend primarily upon trapping for their furs rather than buying them from Native Americans. The men who worked for Ashley did not earn a fixed wage; instead, they split the proceeds of the furs they obtained.

On June 1, 1823, Ashley and his party of 70 men were attacked by 600 Arikara Indians, inciting what is known as the Arikara War. Twelve of Ashley’s men were killed, and the rest were forced to retreat. Sublette escaped, and Jedediah Smith volunteered to contact Andrew Henry and bring back reinforcements. A couple of months later, Colonel Henry Leavenworth leading 200 soldiers and 700 Sioux allies, with Sublette in a temporary post as a sergeant major, attacked and routed the Indians at the Arikara villages on August 9th. 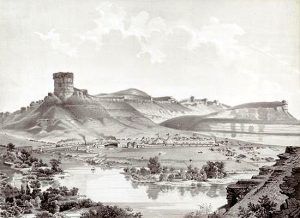 Sublette continued trapping, accompanying Jedediah Smith and others into the Crow country, and by the spring of 1824, was working on the Green River and its tributaries in Wyoming. Later that year, he accompanied Smith to the Pacific Northwest, reaching Hudson’s Bay Company territory. Two years later, he, along with Jedediah Smith and David Jackson, purchased Ashley’s interest in the Rocky Mountain Fur Company.

Over the next several years, he continued to trap in the mountains while making several trips back to St. Louis to sell the furs and obtain supplies. In 1830, he was the first to bring wagons back to the Rocky Mountains and helped to blaze the Oregon Trail by finding a shortcut, now known as “Sublette’s Cut,” in Wyoming. That year, when he returned to St. Louis, the partnership with Smith and Jackson was dissolved.

In 1831, he entered the Santa Fe Trade but abandoned the idea after the death of Jedediah Smith. He soon returned to trapping in the mountains and was present at the Battle of Pierre’s Hole on July 18, 1832, in which he was wounded. However, in December of that year, he recovered and formed a partnership with Robert Campbell, who had long been with him on numerous mountain expeditions. Their firm operated for the next ten years, with their only serious opposition being the American Fur Company. They later sold their business to the American Fur Company, and Sublette settled in St. Louis, Missouri, where he became involved in business and politics.

In 1844, Sublette married Frances Hereford of Tuscumbia, Alabama. In the spring of 1845, he desired to become the Superintendent of Indian Affairs at St. Louis and soon made a trip to Washington to secure the position. During his trip, he was in Pittsburgh, Pennsylvania, on July 23, where he became ill and died. He was initially buried in the private burying ground on his farm on the outskirts of St. Louis. However, his remains were later removed to Bellefontaine Cemetery in St. Louis, Missouri.

Sublette willed his property to his wife, Frances, on the condition that she would not change her name. Four years after William Sublette’s death, she married his brother, Solomon P. Sublette, thus never changing her last name.