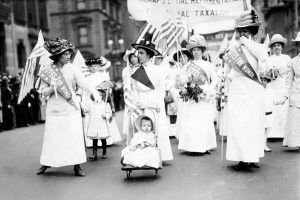 “I think the girl who is able to earn her own living and pay her own way should be as happy as anybody on earth. The sense of independence and security is very sweet.”   ― Susan B. Anthony. 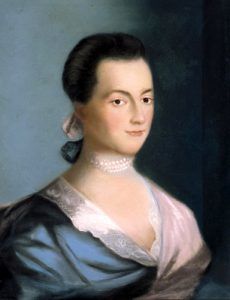 Abigale Adams, wife of President John Adams, the 2nd president of the U.S.

As the foundational documents of our nation were drafted, Abigail Adams repeatedly reminded her husband, John Adams, the second U.S. President, that he and the other men drafting these documents should “Remember the Ladies.” Unfortunately, it would be many years before the ladies were “remembered” and guaranteed equal rights in the United States.

Beginning in the early 1800s, there were many advocates of equal rights for men and women. The first women’s rights convention in the United States was held July 19-20, 1848, in Seneca Falls, New York. This gathering marked the formal beginning of the women’s rights movement. At the time of the convention, women were not allowed the freedoms assigned to men in the eyes of the law, the church, or the government. Women did not vote, hold elective office, attend college, or earn a living. If married, they could not make legal contracts, divorce an abusive husband, or gain custody of their children. 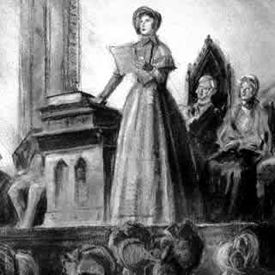 At the convention, these women presented a Declaration of Sentiments, based on the language and content of the Declaration of Independence. Stating that “all men and women are created equal,” they demanded equal rights for women, including – a radical idea – the right to vote. An estimated 300 people attended the Convention; the document was ratified and was signed by 68 women and 32 men.

Two weeks later, a Woman’s Rights Convention was held in Rochester, New York on August 2nd. It was followed by state and local conventions in Ohio, Pennsylvania, and New York. The first National Woman’s Rights Convention was held in Worcester, Massachusetts in 1850. The women’s rights movement grew into a cohesive network of individuals who were committed to changing society.

The Civil War disrupted suffrage activity as women turned their energies to “war work.” But, when the war ended, political activism resumed. In 1866 Elizabeth Cady Stanton and Susan B. Anthony formed the American Equal Rights Association, an organization for white and black women and men dedicated to the goal of universal suffrage.

In 1868, the Fourteenth Amendment was ratified, which extended to all citizens the protections of the Constitution against unjust state laws. However, this Amendment also defined “citizens” and “voters” as “male.” The ladies remained unremembered.

In 1869, the women’s rights movement split into two factions as a result of disagreements over the Fourteenth and soon-to-be-passed Fifteenth Amendments. Elizabeth Cady Stanton and Susan B. Anthony formed the more radical, New York-based National Woman Suffrage Association (NWSA), formed to agitate for an amendment to the U.S. Constitution. Lucy Stone, Henry Blackwell, and Julia Ward Howe organized the more conservative American Woman Suffrage Association (AWSA), which was organized the same year to work through the state legislatures. That year, the Wyoming territory was organized with a woman suffrage provision. In 1890, Wyoming was admitted to the Union with its suffrage provision intact.

In the 1870s, disheartened by the response to the proposed Federal amendment, suffragists also tried other approaches to winning the vote. These included using the courts to challenge their exclusion from voting on the grounds that, as citizens, they could not be deprived of their rights as protected by the Constitution. In 1872, Susan B. Anthony attempted to vote, hoping to be arrested and to have the opportunity to test this strategy in the courts. She was arrested and indicted for “knowingly, wrongfully and unlawfully voting for a representative to the Congress of the United States.” Found guilty and fined, she insisted she would never pay a dollar of it. Virginia Minor, a suffrage leader in St. Louis, Missouri, succeeded in getting the issue before the United States Supreme Court, but in 1875, the Court ruled unanimously that citizenship did not automatically confer the right to vote and that the issue of female enfranchisement should be decided within the states.

These differing approaches, i.e., whether to seek a Federal amendment or to work for state amendments—kept the woman suffrage movement divided until 1890 when the two societies were united as the National American Woman Suffrage Association. Later leaders included Anna Howard Shaw and Carrie Chapman Catt. Several of the states and territories (with Wyoming first, in 1869) granted suffrage to the women within their borders. 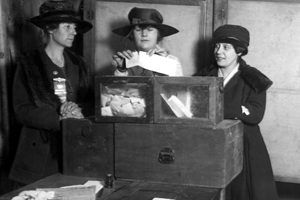 Several years after the Supreme Court ruling on the issue of women voting, in 1878, a Woman Suffrage Amendment was introduced in the United States Congress. However, nothing would become of it for more than four decades. When the amendment finally passed both houses in 1919, the wording remained unchanged.

Through these many years, women organized, petitioned, and picketed to win the right to vote. Between 1878, when the amendment was first introduced in Congress, and August 18, 1920, when it was ratified, champions of voting rights for women worked tirelessly, but strategies for achieving their goal varied. Some pursued a strategy of passing suffrage acts in each state while others challenged male-only voting laws in the courts. Militant suffragists used tactics such as parades, silent vigils, and hunger strikes. Often supporters met fierce resistance. Opponents heckled, jailed, and sometimes physically abused them. 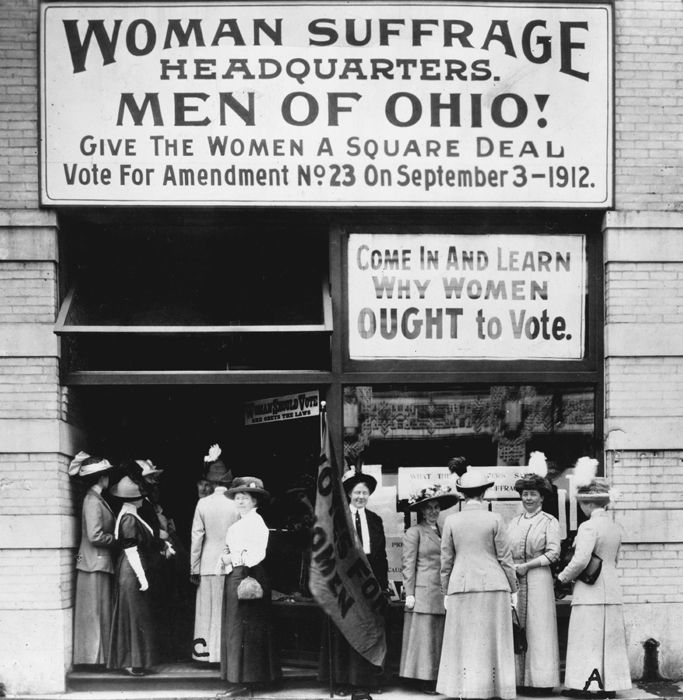 In 1890, when the NWSA and the AWSA were reunited as the National American Woman Suffrage Association (NAWSA) under the leadership of Elizabeth Cady Stanton, slow, progress continued to be made in securing the vote for women. In 1912, Theodore Roosevelt’s Progressive Republican Party became the first national political party to adopt a woman suffrage plank. By, 1913, only nine states — all in the West — provided women the right to vote. In 1916, Jeannette Rankin of Montana became the first woman elected to represent her state in the U.S. House of Representatives.

When New York adopted woman suffrage in 1917 and President Wilson changed his position to support an amendment in 1918, the political balance began to shift. On May 21, 1919, the House of Representatives passed the amendment, and two weeks later, the Senate followed. When Tennessee became the 36th state to ratify the amendment on August 18, 1920, the amendment passed its final hurdle of obtaining the agreement of three-fourths of the states. Secretary of State Bainbridge Colby certified the ratification on August 26, 1920, changing the face of the American electorate forever. 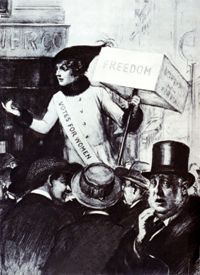 The 19th amendment guaranteed all American women the right to vote. Achieving this milestone required a lengthy and difficult struggle; victory took decades of agitation and protest. Beginning in the mid-19th century, several generations of woman suffrage supporters lectured, wrote, marched, lobbied, and practiced civil disobedience to achieve what many Americans considered a radical change of the Constitution. Few early supporters lived to see final victory in 1920.

Its victory accomplished, the NAWSA ceased to exist, at which time the organization became the nucleus of the League of Women Voters. This group directed its focus toward many of the same social and political issues that occupied other women’s groups. Its emphasis was on educating voters, particularly newly enfranchised women, about candidates and campaign issues, especially relating to child labor and welfare, citizen participation, civil rights, consumer affairs, environmental concerns, ratification of the Equal Rights Amendment, immigration, labor, national security, and women’s legal status and rights.

In addition to promoting its own programs, the league was also a prime mover behind the Women’s Joint Congressional Committee, an umbrella organization of various women’s and social reform groups that was formed in 1920 to serve as an information clearinghouse and lobbying force for pending federal legislation. Among the charter members were the League of Women Voters, National Consumers’ League, National Women’s Trade Union League of America, National Council of Jewish Women, and six other groups. More organizations joined a few years later to promote legislation against lynching and for maternity and infant health protection, independent citizenship for married women, funding for the federal women’s and children’s bureaus, and creation of a Department of Education. 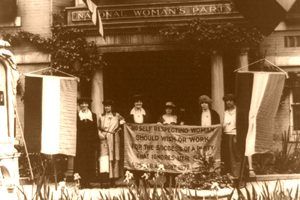 One group that did not join the Women’s Joint Congressional Committee was the National Woman’s Party, the leading proponent of the Equal Rights Amendment, which National Woman’s Party chair, Alice Paul, drafted in 1923. The amendment proposed to eliminate discrimination on the basis of gender.

The Women’s Joint Congressional Committee resisted the Equal Rights Amendment as a threat to the sex-based protective labor legislation that its members had fought for years to secure. Several decades passed before the influential League of Women Voters and other former Women’s Joint Congressional Committee members supported the Equal Rights Amendment, which Congress did not pass until 1972.

The long and difficult struggle for women’s suffrage is one of the best-documented, most widely researched, and most seriously debated topics in American women’s history. That historians know as much as they do about the suffrage campaign is in large part because of its participants’ conscious efforts to record their movement’s history. In the late 1870s, in the very midst of their campaign, leading suffragists Susan B. Anthony, Elizabeth Cady Stanton, and Matilda Joslyn Gage began chronicling the movement in The History of Woman Suffrage, published in three monumental volumes between 1881 and 1886. The early leaders supplemented this history by publishing various autobiographies and memoirs and by assiduously collecting clippings, books, and pamphlets about their efforts. Many of these original documents are held today at the Library of Congress in the Rare Book and Special Collections Division. 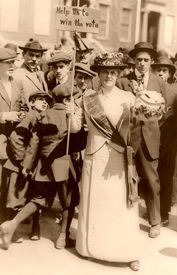 “I always feel… the movement is a sort of mosaic. Each of us puts in one little stone, and then you get a great mosaic at the end.”