Situated on the north bank of the Arkansas River in southeastern Colorado, this non-military fort was one of the most significant outposts on the Santa Fe Trail and the principal outpost of American civilization on the southwestern Plains it was instrumental in shaping the destiny of the area. In the heart of Indian country, buffalo hunting grounds and at the crossroads of key overland routes, it was a fur-trading center and rendezvous point for traders and Indians; a way station and supply center for emigrants and caravans; and the chief point of contact and cultural transmission between white settlers and Indians of the southern Plains. In its later years, it was a military staging base for the U.S. conquest of New Mexico. 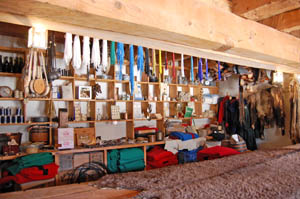 Among the earliest western fur traders were the brothers William and Charles Bent and Ceran St. Vrain, all of whom, in the 1820s, began to engage in the Mexican and Indian trade. In about 1830, Charles Bent and St. Vrain formed a partnership, which became Bent, St. Vrain, and Co., and entered the Santa Fe trade. In the late 1820s or early 1830s.

William Bent, who had been trading independently, erected a large adobe fort on the north bank of the Arkansas River, 12 miles west of the mouth of the Purgatoire River. At first named Fort William, it was also known as Bent’s Fort and Bent’s Old Fort. Elaborately constructed, it was eventually a massive adobe structure of the quadrangular shape, having 24 rooms lining the walls. Two 30-foot cylindrical bastions flanked the southwest and northeast corners, equipped with cannons. The walls were 15 feet high, two feet thick, and extended four feet above the building roofs to serve as a platform for armed soldiers and were pierced with loopholes. A high wall on the south side enclosed a cattle yard. The fort was self-sufficient by about 60 persons of many nationalities and vocations, including blacksmiths, trappers and traders, carpenters, mechanics, wheelwrights, gunsmiths, cooks, cattle herders, hunters, clerks, teamsters, and laborers.

The fort was the headquarters of Bent, St. Vrain, and Co. and the great crossroads station of the Southwest, for it was located at the junction of the north-south route between the Platte River and Santa Fe, New Mexico, and the east-west route up the Arkansas River to the mountains. Mountain men stopped by to exchange their beaver skins, obtain supplies and traps, and visit with one another. Traders forwarded their fur shipments and obtained goods. For 16 years, Bent, St. Vrain, and Co. managed a highly profitable trading empire stretching from Texas to Wyoming and from the Rocky Mountains to Kansas and participating in the Santa Fe trade. 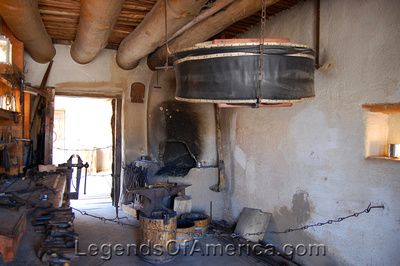 In 1835, William Bent, who acted as resident manager at the fort, married the daughter of a prominent Southern Cheyenne Indian and became incredibly influential with that tribe. Besides encouraging intertribal peace, he required his employees to trade fairly with the Indians and restricted the use of whiskey when trading. His influence helped the Arapaho and Southern Cheyenne remain friendly to the United States until well after the Mexican-American War. Because of its reputation as a neutral area in Indian country, the post was a natural meeting place for southern Plains tribes and U.S. officials, and intertribal councils.

In 1835, Colonel Henry Dodge met at the fort with the chiefs of several tribes to discuss depredations on the Santa Fe Trail. Five years later, at a significant peace council held three miles to the east, William Bent served as a mediator among several tribes, including the Cheyenne and Comanche, who made a peace pact. Taking advantage of the fort’s location and Bent’s singular influence, the Government, in 1846, designated the post as the Upper Platte and Arkansas Indian Agency. The agent was Thomas Fitzpatrick. 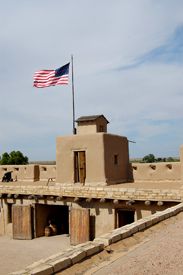 Bent’s Fort on the Santa Fe Trail by Kathy Alexander.

His activities among the Indians inhabiting a vast area, running eastward from the Rocky Mountains and from the Arkansas River on the south to the Missouri River on the north, helped bring about treaties at Fort Laramie, Wyoming, in 1851, and Fort Atkinson, Nebraska, in 1853, that temporarily brought a degree of peace to the Plains.

As powerful as the Bents and St. Vrain were, as the Mexican-American War (1846-48) approached, events beyond their control were destined to destroy the company and the trade. In 1846, the U.S. Army decided to use the post as a staging base for the conquest of New Mexico. That summer General Stephen W. Kearny and his Army of the West, consisting of about 1,650 dragoons and Missouri Volunteers from Fort Leavenworth, Kansas, followed by some 300 to 400 wagons of Santa Fe traders, rested at the fort before proceeding to occupy New Mexico.

When Kearny departed, Government wagon trains congregated in ever-increasing numbers. Horses and mules overgrazed nearby pastures. Quartermaster stores piled up at the fort, and soldiers and teamsters in Government employ occupied the rooms. The government failed to compensate the company adequately, and trade suffered because the Indians were reluctant to come near when so many whites were present. Following the soldiers into New Mexico were scores of settlers, gold seekers, and other adventurers who slaughtered the buffalo, fouled the watering places, destroyed scarce forage, and used precious wood. The company soon found itself caught between the resentful Indians and invading whites.

Several other factors accelerated the company’s demise. In 1847, Charles Bent, who the year before had been appointed the first Governor of New Mexico Territory, was assassinated during the Taos Revolt. The following year, St. Vrain sold his interest in the company to William Bent. The final blow was a cholera epidemic, which in 1849 spread from emigrant wagons and decimated the Plains tribes. That same year, a disillusioned William Bent abandoned the fort, moved 38 miles down the Arkansas River, and founded Bent’s New Fort in an ill-fated attempt to restore his trading business.

Bent may have partially blown up and burned Bent’s Old Fort when he departed. By 1861, at the end of more than a decade of disuse, the fort’s rehabilitated walls sheltered a stage station on the Barlow and Sanderson route between Kansas City and Santa Fe, New Mexico. When the railroads replaced stagecoaches, the buildings served as cattle corrals and gradually collapsed and disintegrated. However, as late as 1915, parts of the old walls were still standing.

Early in the 1950s, the Colorado State Historical Society acquired Bent’s Old Fort and soon arranged for an archeological investigation to determine the fort’s general outlines. The site was designated as a National Historic Landmark in 1960. More archeological excavations occurred after it became part of the National Park System. The information obtained in these excavations provided the information to reconstruct the old adobe trading post entirely. Today, living historians recreate past sights, sounds, and smells with guided tours, demonstrations, and special events. 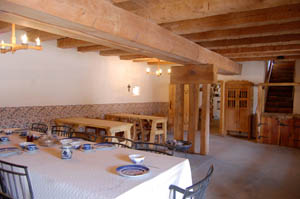