Arthur C. McCoy (1825-1880?) – Born in Ireland in 1825, McCoy immigrated to the United States, first settling in California during the gold rush. However, by the 1850s he was living in St. Louis, Missouri, where he worked as a coppersmith. In 1855, he married Louisa Gibson and the couple would eventually have five children. He then formed a partnership and started a painting business called “Farmer and McCoy.” During the Civil War, he became a captain under Confederate General Jo Shelby and was said to have worked as a spy. After the war, he became involved with the James-Younger Gang and was thought to have been involved in several robberies as well as killing a Pinkerton Agent named Joseph Whicher in 1874. He then moved his family to Texas, where he began working as a rancher. He was thought to have died in around 1880.

“One-Legged Jim” McCoy – An outlaw, he killed Sheriff Charles McKinney in La Salle County, Texas and was hanged in San Antonio in 1887.

J. McDaniels –  Outlaw member of the Pitts-Yeager Gang, he was killed in 1884 in Texas.

John McDaniel (18??-1844) – Reportedly a soldier for the Texas Republic, McDaniel plundered Mexican wagon trains on the Santa Fe Trail. he was hanged in St. Louis, Missouri on August 16, 1844.

William “Bud” McDaniels – An outlaw and former Quantrill’s Raider during the Civil War, he rode with the James Gang.

J. McDonald – A gunman, he shot and killed his friend Robert Taylor on January 13, 1890, in Clayton, New Mexico.

Walter McDonald – A gunman, he shot Thomas Richards in 1884 in Coeur de’Alene, Idaho.

Annie McDougal (or McDoulet), aka: Cattle Annie – An outlaw, at eighteen, associated with the Doolin Gang and was suspected of stealing livestock and selling whiskey. Steve Burke captured her and Bill Tilghman caught her partner Little Britches and they were sent to reform school.

Orpheus McGee (18??-1876) – Orpheus McGee shot and killed Robert Alexander on April 20, 1874, in Oklahoma. He claimed that Alexander had murdered a friend of his and the shooting was out of revenge. He was hanged at Fort Smith, Arkansas on April 21, 1876.

Patrick McGowen – Though McGowen claimed self-defense in the killing of a man in Oklahoma, he was found guilty of murder and hanged at Fort Smith, Arkansas on September 9, 1881.

James McIntire (1846-1902) – A Texas gunman and lawman from 1860, he was a Texas Ranger, city marshal of Las Vegas, New Mexico, deputy sheriff, cowboy, hunter, gambler, and outlaw with a $1,000 reward on his head for the deaths of two men near Silver City, New Mexico.

William J. McGrew – McGrew might have been a hero but instead turned out to be a scalawag. Author Sue Moore tells the story of his demise in Montgomery Texas. 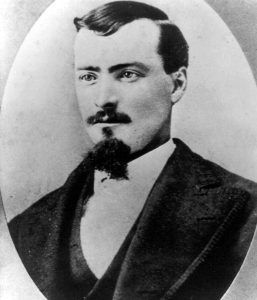 Irving McManus –  An outlaw, he rode with the Black Jack Ketchum gang in the 1890s.

Sherman W. McMasters (1853-??) – McMasters was an outlaw turned lawman who would become one of the six men involved in the Earp Vendetta Ride. It is unknown when or how he died.

Bill McNew –  A gunman and accused rustler, he fought with Oliver Lee in the Lee-Good feud in Tularosa, New Mexico.

Harvey Meade – A road agent in Montana and thought to have been a member of Henry Plummer’s gang of Innocents. He was hanged by Montana Vigilantes.

Henry Wilbur “Bob” Meeks – An outlaw member of the Wild Bunch, he was imprisoned in the 1900s. He died in an insane asylum on November 22, 1912, in the State Hospital in Evanston, Wyoming.

Nica Meras – An outlaw, he stole horses in Lincoln County, New Mexico and was shot in 1877.

David Merrill – An Oregon outlaw, Merrill rode with Harry Tracy who killed him in 1899, after a prison escape.